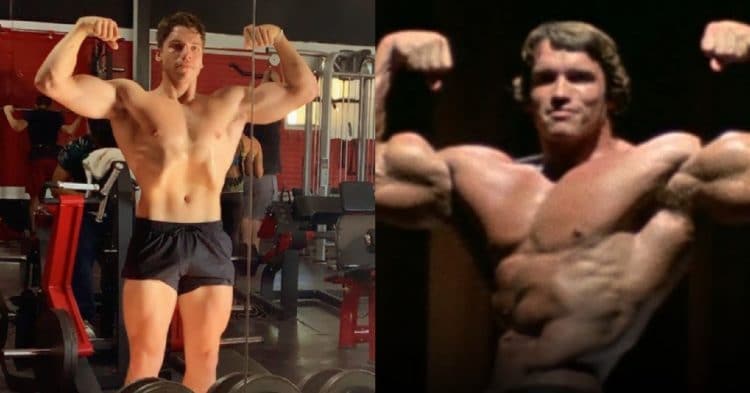 As fall begins rolling in, things are starting to cool down for a lot of people. This was not the case at all for Joseph Baena, as he suffered through a brutally hot workout in a gym with a temperature in the triple digits.

The last few months have seen Baena really begin to level up his training and seemingly focus on competing at some point. As of now, he has not given any sort of timeline or expectations of when he will compete, but it appears to be a foregone conclusion that he will be following in the footsteps of his father, the legendary Arnold Schwarzenegger. With each passing update, he looks more and more like his father, even regularly posing in similar ways to how Arnold looked at his peak. Everyone tries to remember that Joseph will be carving his own path, but it is hard to miss the resemblance in their physiques and work ethic.

This was perhaps displayed in the best way yet, when Joseph Baena provided an update from a recent training session, posted to his Instagram Stories. Although it is not exactly made clear what his workout consisted of, he updates fans with a front double bicep in the mirror. However what makes this so impressive, is the fact that it was apparently a whopping 100°F in the gym where he was training.

That is most certainly not the most comfortable environment to train in, but Baena is used to working out in the heat. In the midst of the global pandemic he did most of his iron pumping outside, soaking up the California sun. In fact, some people even believe it is better to exercise in the heat, as it allows your muscles to naturally warm up, thus minimizing the chance of injuries.

It has been crazy to see Joe’s progress towards being stage ready with his physique. The last several months have seen a clear uptake in the training he has been doing. As such, the results are evident with one look at his frame.

It is a fascinating thing to watch an athlete develop his body with a specific goal in mind. For Joseph Baena, he has a lot of great help in his corner, to work with him and hone his craft. However none of that means anything without the hard work that he has been absolutely putting in.

Nick Walker: ‘I’m Coming To Win And Make A Statement’ At Chicago Pro