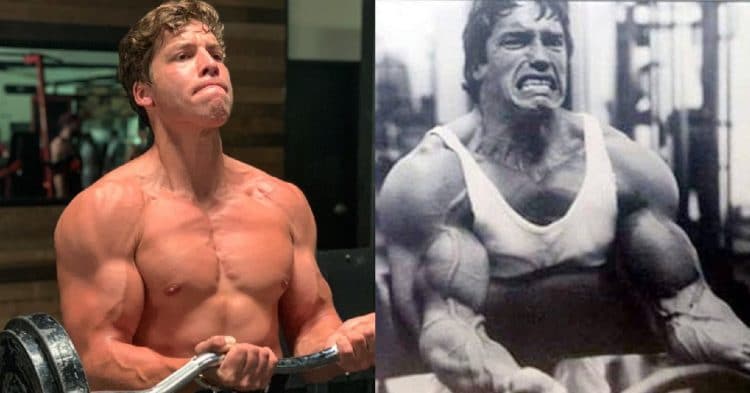 From the moment he started out his fitness journey, fans have made comparisons between Joseph Baena and his father, Arnold Schwarzenegger. However it is hard to not make these comparisons when you see pictures like the one he shared recently.

Being the son of a bodybuilding legend must come with both positives and negatives. On the one hand, Baena has been able to benefit from his relationship with Arnold by training with him, as well as other big names in the sport. On the other hand, he is forced to deal with the never ending comparisons between he and his father, which can lead to difficulties in paving his own path in the sport.

That being said, it seems that Joseph Baena does not mind these comparisons, even embracing them to a certain extent. He has been known to put himself into positions where people can’t help but note the similarities between father and son, even mimicking some of his father’s iconic poses from time to time. He posted another photo like this to his Instagram recently, holding a barbell with some heavy weight on it, and looking like the spitting image of his dad.

It seems that Baena’s physique is coming along nicely over the last several months, as he has started to amp up his training. You can see a lot of the qualities that Arnold was known for in his prime, particularly with his massive and rounded chest. In addition to the solid photo and workout shown, Joseph also shared his meals for the day, breaking down his diet. Here is what he shared:

As time goes on, Joseph Baena continues to mirror a lot of the traits that made Arnold Schwarzenegger so beloved back in the day. Not only does he want to have a career in bodybuilding, with a natural physique that looks nearly identical to his father’s, but he also wants to pursue a career in acting as well. Not to mention, he seems like a humble and good natured kid, so it is always fun to see his growth and improvement as an athlete, and as a man.

How To Watch 2020 CrossFit Games