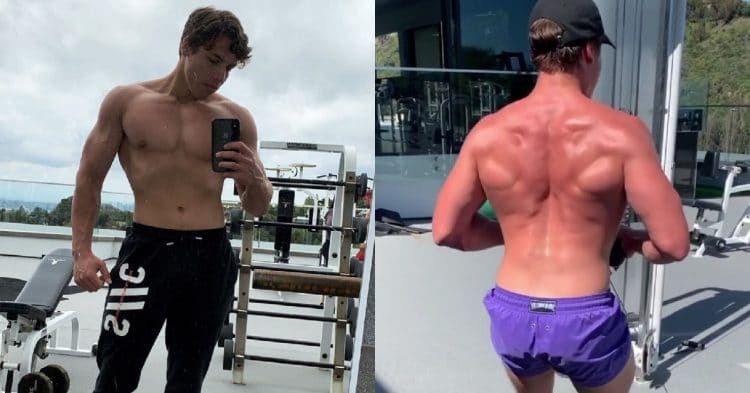 Joseph Baena has been making quite a stir in the fitness community lately, and not just because his father is Arnold Schwarzenegger. He recently showed a glimpse of his back workout, and it is leaving us to pick our jaws off of the floor.

Sure, Joseph Baena is the son of bodybuilding great Arnold Schwarzenegger, but he has been proving to be much more than that. Although it is always fun to see him mirroring his dad’s poses, and point out the similarities between the two. However, Joseph has been paving his own way in the strength sports community, earning respect for his skills and ability, rather than just riding the coattails of his father’s legacy.

These skills were fully displayed with a recent Instagram post from Joseph. Here he is working on his back training, knocking out some heavy cable rows. His back looks massive while he is doing it, and the amount of hard work he has been putting in is evident in his physique.

“Back attack!
What’s the first thing you’re gonna train when you get back into the gym?”

Seeing him doing work like this makes it easy to see why Baena looked so impressive while he was posing recently. In another one of those sessions where you can not help but note the similarities between him and Arnold, he gave his best attempts at a 3/4 back pose. It was a great opportunity to really see the definition in his back, which is clearly a result of work like this.

Joseph Baena seems to prove time and again that he could very easily be a force to be reckoned with in the bodybuilding world. While he has yet to compete, if he ever decided to, it is safe to assume he would have people anxiously waiting to see how he looks.