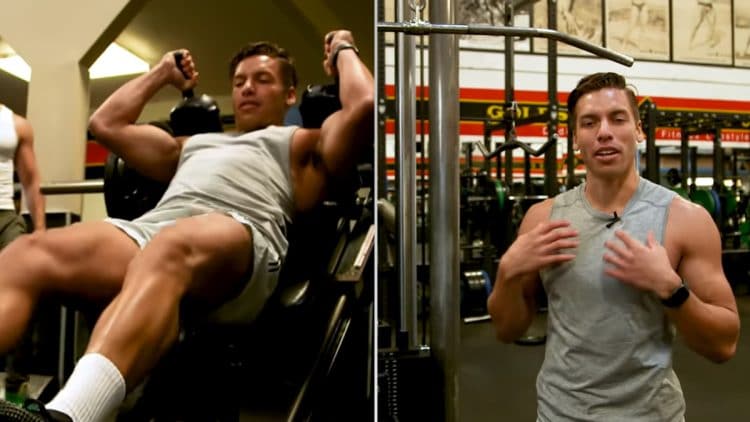 Joseph Baena has inherited the love of bodybuilding from his father and bodybuilding legend Arnold Schwarzenegger. Baena trains at the Gold’s gym in Venice beach, California and routinely shares workout posts on his social media accounts where he recreates some of Arnold’s most iconic bodybuilding poses. In a recent interview with Men’s Heath magazine’s YouTube channel, Baena shared what his typical day of training in the gym looks like.

The 24-year-old budding actor was inspired by his father’s ‘perfect physique’. Also, it was Arnold who gave Baena the book Bodybuilding Encyclopedia that helped him a lot with training. In the gym, Baena performs all or most of the exercises for four sets of medium rep range. Baena explained:

“Big note that I’ll like to tell everyone is not to flare the elbows out. So you bring the elbows down a little bit. Make sure you focus on the chest,” Joseph Baena advised.

Keeping the elbows down during incline dumbbell press significantly reduces the risk of a shoulder injury that tends to occur when elbows are flared out during incline bench press.

Lat pull-down is a cable-based exercise to build the back. Effective in building back strength and size, Lat pull-downs are generally performed in the medium-rep range (8 to 12 reps). Cable provides constant tension in the muscles during lat pull-downs which is an added benefit.

Baena stated that his goal is always to be better than he was yesterday and to keep the ‘waist tight, lats big and shoulders even wider’ and lat pull-downs are just the right movement to get those big lats.

Chest press is a classic upper body exercise that strengthens the chest, arms, and shoulder muscles. There are many variations of the chest press. However, Joseph Baena prefers cable chest press. Machines allow better control and slow movements. As a result, the risk of injuries is greatly reduced. Baena stated that he had a pec injury and since then, he has switched to using machines more.

Joseph Baena trains six days a week. He does not like to days off from training and prefers to have ‘active rest days’ instead. What are active rest days? Baena said:

“I’ll go on a hike, I’ll do some cardio, do some different things but I won’t necessarily lift so much weight.”

Seated cable row is another machine exercise that targets lats, rear delts and erector spinae. The workout demonstrates the edge machines have over free weights as the muscles remain in constant tension throughout the rowing action and get the best results. It is advised to keep the back straight during seated cable rows. However, Baena stated that he likes to bend forward a little bit during the eccentric phase of this workout to stretch the lower back.

Military press used to be one of the most common exercises to build chest, shoulders, and triceps strength. However, it has become less common these days with the rise in popularity of bench press. Military press is similar to overhead press. However, you have to stand with your feet together instead of shoulder width apart like for overhead press. This takes away the stable platform provided by the lower body and core muscles come into picture to stabilize the upper body. This is applicable even when you perform the workout while sitting.

Just like in incline dumbbell press, Joseph Baena advised to keep the elbows down instead of flaring them out to avoid shoulder injury.

The back is capped by shoulders and without them, the body’s aesthetic is incomplete no matter how big of a back or biceps you have. One of the simplest exercises for building shoulder strength and size, lateral raises involve a simple movement of raising the dumbbells on sides and then lowering them down. Baena performs two sets of 15 to 20 reps. He then performs a drop set of 15 to 20 reps to failure before moving on to the next workout.

Hack squat is a lower body exercise performed with a machine. The person has to stand on a plate with his back pressed against a pad. Weight is carried on a different set of pads that rest on shoulders. The weight is lifted during the concentric phase of the workout when the person stands up. It is one of the best lower body exercises that greatly reduce the strain on knees caused by exercises like barbell squats.

Hack Squats is Joseph Baena’s favorite lower body workout. Unlike most other workouts, Joseph Baena performs six sets of hack squats with each set consisting of 10 to 20 reps.

“I usually like to go about six sets, starting with 20 reps for the first two, 15 reps for the next two and the last two sets I have 10 reps, and then I’ll drop down. That means I’ll have a few plates stacked up here and I’ll just start stripping the plates off one by one, going to failure almost every set,” Joseph Baena said.

Courtesy of Men’s Health YouTube channel you can watch the full video here: