Joseph Baena lit up social media with a recent physique update resembling one of his father's famous bodybuilding poses. 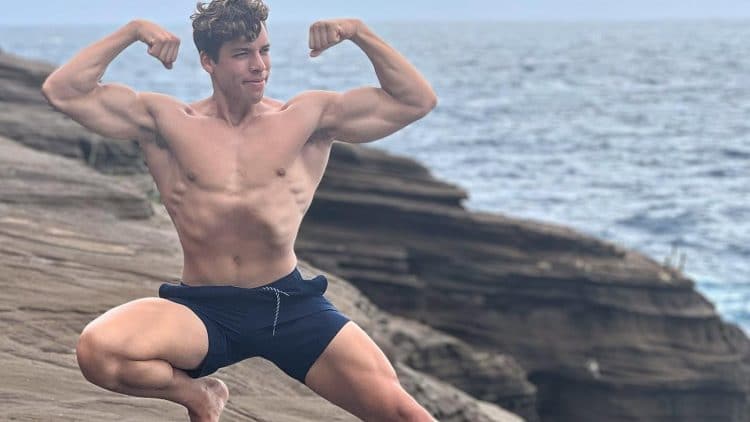 Joseph Baena is a spitting image of his father, Arnold Schwarzenegger. The son of the famous bodybuilder showed as much in a recent social media post after recreating a famous pose Schwarzenegger was known for in his heyday.

Schwarzenegger’s son, Joseph Baena has followed in his father’s footsteps. The up-and-coming actor has made a name for himself on the big screen. Gearing up for the set of his new movie project, the 24-year-old proved he has the same kind of ambition that his father shared for creative projects.

In preparation for filming, Baena showed off a sculpted physique that he’s clearly worked hard for. Baena and his role in Lava garnered widespread enthusiasm as of late since the film is believed to be the first of its kind — fully funded by cryptocurrency.

Despite appearing leaner than usual, the young actor’s form looks stellar. Baena is known to train with his father at the infamous Gold’s Gym in Venice Beach. In fact, Baena has even mentioned that his father is “the best training partner in the world”.

Arnold Schwarzenegger has always supported all of his sons and is proud of the ambition Baena has developed in his flourishing acting career. Despite the uncanny resemblance, Joseph Baena has no intention of adopting his father’s surname.

Speaking on the Unwaxed podcast, Baena admits that it took some warming up to his father before the two became closer. The son of the famous bodybuilder/actor is adamant that he didn’t want to fall short of his father’s expectations at a young age.

“I grew up with my mom and I was always nervous and I didn’t want him to think bad of me and be like, ‘What the heck is this guy doing? He’s just partying all the time,'” he said. “Now it’s like awesome. I’m so close to my dad and we joke about everything.” Joseph Baena said.

Joseph Baena recreated one of his dad’s famous bodybuilding tableau poses. The son of the legendary bodybuilder shared his sculpted physique in a recent post on his Instagram page.

“May be a little lighter but I still got the poses down” Joseph Baena shared.

The budding actor mentioned in the past that he intends to compete in bodybuilding in due time. Joseph Baena, like his father, is multi-talented and likes to keep busy. Aside from bodybuilding and acting, it looks as though Baena will soon try his hand in real estate.

RELATED: Joseph Baena Shows off His Muscular Physique and Gains in a Shirtless Photo

While being in the limelight can be difficult for some, Baena has welcomed it with open arms and runs a busy schedule like his father. After recreating one of his dad’s famous bodybuilding poses, social media exploded after seeing how closely related he looks to the one and only Arnold Schwarzenegger.