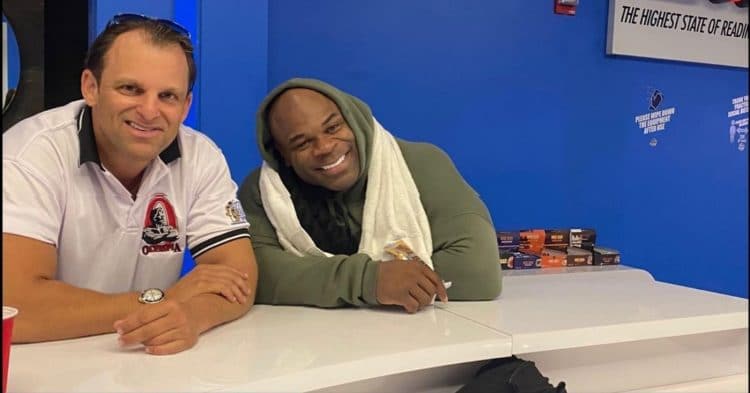 It has been far too long since the last time fans got to see Kai Greene competing on stage. However a recent picture emerged that seems to suggest he could finally be plotting a comeback.

While it is impossible to deny that Greene is one of the most popular people in the entire sport, there has been a hunger to see him back on stage again. After all, it has been five years since he last competed.

In the time since his last competition, Kai has been busy as a social media influencer and entrepreneur. Between his acting roles, podcasts, and time spent helping other athletes, he has been in the public eye, just not as a competitor.

Now it would appear that fans could finally be getting what they want. A recent photo seems to suggest that Kai Greene could be preparing to make a return to bodybuilding competition at some point soon.

The photo in question, which was posted to Instagram, sees Kai having a meeting with Chief Olympia Officer Dan Solomon. The subject of this meeting is not revealed, but it has fans buzzing with anticipation that this could mean a comeback for the fan favorite bodybuilder.

“Visited with my friend Kai today.
Can you guess what we were discussing?”

To be clear, there is absolutely nothing concrete to suggest that Kai Greene is actually going to returning. That said, it does seem interesting that he is meeting with Solomon.

That being said, if it is true that he is looking to come back, the question then becomes whether or not he should get another special invitation to the Mr. Olympia, or if he should be forced to compete and qualify beforehand.

It is worth noting that Olympia VP Tyler Manion has been vocal about his disdain of special invitations for the contest, especially regarding Greene. He even specifically said that if Kai wants to return, he would have to qualify.

“He’s not getting one going forward, so if he ever wants to compete again, he has to come back and qualify,” Manion said, regarding Kai.

At the end of the day, time will tell if Kai Greene decides to compete again, or if he goes for another Olympia run. Fans would undoubtedly be stoked to see him back on stage, but with how long it has been since he competed, there is no telling how he would look if he did return.