No Result
View All Result
Core
Fact Checked
Fact Checked
This article was written by one of our qualified writers, and fact-checked by our experts. The numbers in parentheses (e.g. 1, 2, 3, etc.) throughout the article, are reference links to peer-reviewed studies.
Our team of experts include a board-certified physician, nutritionists, dietitians, certified personal trainers, strength training experts, and exercise specialists.
Read Our Editorial Process

The crunch may be the most iconic exercise for training the abdominals. But there are so many different variations that you'd be leaving gains on the table by only utilizing the most basic version. In this guide, we've included several of the best variations, explained their benefits, and provided instruction for each one. 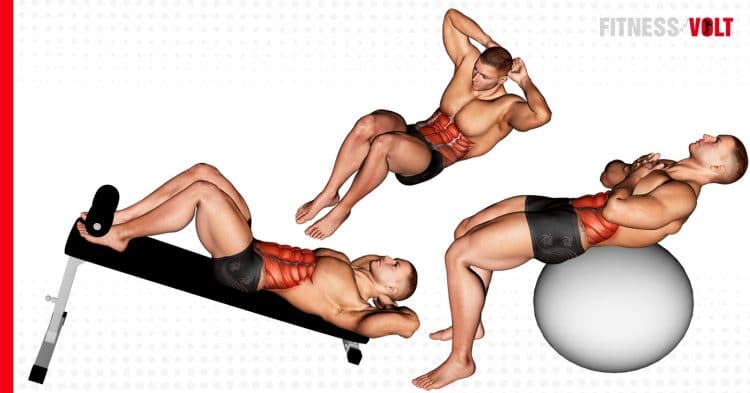 The crunch is a staple exercise for training the abdominal muscles, and it’s undoubtedly the most well-known by the same token. Over the last several decades we’ve seen the addition of the most state-of-the-art ab and core-building machines in gyms nationwide, but even so, the crunch hasn’t seemed to lose its popularity.

But it’s not surprising considering the squat, deadlift, and bench press are still the standard, although they’ve been around since longer than anyone of us can remember. So you could say that these movements were ahead of their time, and the crunch is no exception.

Not to mention, the crunch variations that we’ve included in this exercise guide are nothing new. However, they are excellent choices if you want to really improve your core development and build six (or eight) pack abs.

So let’s discuss each variation, and we’ve provided exercise instructions so that anyone can effectively include crunches in their routine to start making gains!

Performing an exercise not just about going through the motions but ensuring you’re focusing on the correct muscles. In this case, the abdominals are the target muscle group. However, other muscles are involved as well.

The rectus abdominis muscles pull the trunk up off the floor/platform during crunches. These are the external superficial abdominal muscles on the stomach that poke out when an individual is lean.

Obliques are rotational core muscles although still receive engagement during a regular crunch exercise. Located on either side of the six pack abdominal muscles, obliques help to give the core a complete, visually appealing look.

Crunches aren’t a butt exercise. However, the gluteus maximus especially helps to keep the body stable as a strong lower body muscle that acts on the legs and hips.

The iliopsoas is the primary flexor of the hip and the strongest of the hip flexors that consists of the psoas major and minor and the iliacus, also called the musculotendinous unit (IPMU). These muscles can act as a unit or separately to support different movements during postural changes.

Crunches that include the lower body can help to improve flexibility and mobility of the hips.

This variation is a little more challenging than the basic crunch because the arms are held straight over the shoulders when lying on the back. Therefore, it may do a little more to force only the abs to engage not to mention, it helps to prevent pulling against the head or neck which decreases the difficulty of the exercise.

Related article: The Best Six-Pack Abs Workout You Can Do At Home

Instead of holding the arms straight over the shoulders like the previous variation, you’ll extend your arms overhead so that your torso and arms nearly form a straight line. As a result, the range of motion will be shorter with this exercise and the weight of your arms behind your head will make it even more challenging than the first variation provided.

So you’ll be doing two movements during this variation – the crunch and the leg raise. The latter is typically utilized to emphasize more of the lower abdominals, although you cannot completely isolate any of the core muscles. Incorporating the leg raise also significantly increases the difficulty of the movement because the legs are naturally heavy.

Consequently, the crunch (leg raise) is also one of the variations that includes other muscles such as the glutes (butt), quads (thighs), and iliopsoas (primary hip flexor). Doing a crunch and leg raise simultaneously maximizes the contraction of the entire abdominal section which is what we want.

Don’t allow your heel to touch the floor; keep your legs raised at a 45-degree angle. This forces the core to maximally engage.

Crunches with Legs on Stability Ball

Now we’re doing more than just performing a crunch to engage the core muscles; this variation will also challenge and improve your trunk stability (hence the inclusion of the stability ball). You’ll need to focus on keeping your legs as stationary as possible on the ball which will engage the abs even more. This is what we like to call “functional” training.

Another great variation for maximally engaging the core by involving both the upper and lower body; the crunch on a bench is simple and you’ll really feel the burn!

Keep your feet higher than your butt during the set.

So rather than place your lower legs on the stability ball like a previous variation, you’re going to lie on the ball and place your feet on the ground. Not only does this variation help to develop stability but it also allows you to use a larger range of motion which could help to engage the muscles to a slightly greater extent.

This is essentially the same as the previous variation except your arms will be held straight over your shoulders just like with the first exercise listed in this guide.

Although, you’ll need to have decent balance to do this safely and effectively.

Keep your arms raised and stationary during the exercise so that you’re crunching straight up which forces you to work harder.

For this crunch variation, you’re simply going to lie on your back and lift your legs up in the air until vertical. Then you’ll perform the crunches as you normally would.

This is going to strengthen the hips and it also increases the activation of the lower portion of the abs. Not everyone can do this variation because it does require a little flexibility and hip mobility. If you’re not quite there, work on these areas and gradually work on lifting your legs higher and higher each workout until you get there.

So this is the most basic crunch that the old-school legends used and even current bodybuilders incorporate into their core training. It’s a great overall ab exercise and anyone can do it safely and effectively. However, after a certain point it can become too easy. That’s when you should incorporate many of the variations shown or use more resistance by holding weights, doing them on a decline, or using a machine.

Also read: 10 Barbell Exercises For Abs That Will Take Your Gains To The Next Level

It’s hard to say there’s one best crunch exercise because they all serve a different purpose. There are variations for all experience levels.

Are there better exercises than crunches for building abs?

It could be argued that heavy squats, deadlifts and similar exercises are better for core strength, stability, and development. However, crunches are also effective to include in your training because they involve trunk flexion, a primary function of the abdominals.

How many reps should I do for crunches?

It depends on the exercise and level of training experience. However, you don’t want to do too many reps because you still want to challenge the core muscles as you would any muscle. A varied range of 10-25 reps is typically sufficient for most people.

What crunch variations should I combine in a workout?

It’s good to include variations that emphasize both the upper and lower abs separately and together. You also want to do a functional crunch (e.g., stability ball crunch) and a more challenging variation like the crunch (straight leg up).

If you want to improve the development of your midsection, crunches and it’s variations should always be a part of your core training routine. There are plenty of effective exercises here that’ll challenge most exercisers and you can combine several of them for an intense training session.

Carrying too much body fat to see your ab? We think you’ll really benefit from reading this article on how to lose fat without losing muscle.