“Prodigy” is working hard to bring a complete package to the 2022 Olympia stage. 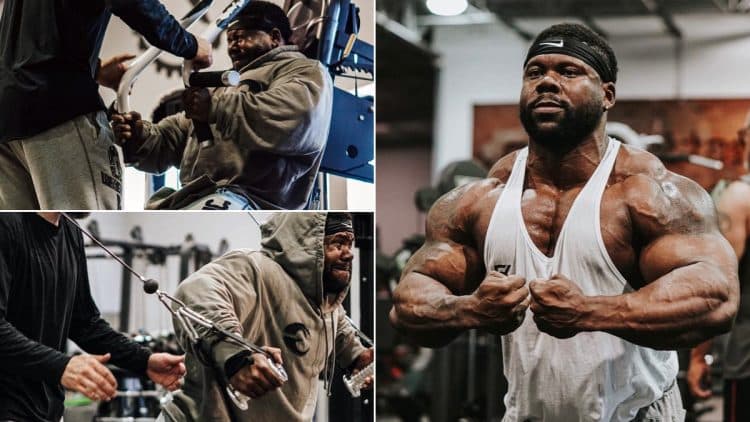 Pearson made a bold switch to the 212 division at the beginning of 2020 and won his divisional debut—the 2020 Chicago Pro to earn a direct qualification to the 2020 Olympia. However, he did not compete at the event due to personal reasons. Another win at the 2021 Chicago Pro qualified him for the 2021 Olympia, where the Georgia native finished 14th. He recently won the 2022 Tampa Pro, earning a direct ticket to the 2022 Olympia.

Prodigy recently went through a chest workout under the guidance of his new coach Ray Baker as part of his 2022 Olympia prep. The video of this session was uploaded on the Iron World YouTube channel.

Pearson warmed up his shoulders and elbows with the standing cable rear delt row and started the chest workout with the incline dumbbell press. It is a compound movement that works the upper pecs. He started this exercise with 65-pound dumbbells in the warm-up set. The 27-year-old performed the working sets with heavier dumbbells in every set using the progressive overload principle.

“The weights are coming all the way down, locking the arms out. We are really keeping the tension so we are doing pretty much almost kind of like a partial rep. That’s what it feels like but it’s actually a little harder – especially with heavier weights,” Pearson said.

After working with free weights in the first exercise, Keone took to this cable machine movement next. Unlike free weights, cable machines put the muscles under tension throughout the range of motion, helping bring about hypertrophy more effectively. Speaking about the importance of incorporating cable movements into their training routine, coach Baker said:

“We need some free motions in here for sure. I just like taking advantage of these things. I’m not a big fan of us being stuck on a barbell and even being stuck on the dumbbells. It can be not as beneficial sometimes; this just gives you a lot more range to move.”

Pearson used fat handle attachments for this exercise. The cylindrical handle was thicker towards the pinky and tapered towards the thumb. This shape helps achieve an ergonomically perfect grip.

The 27-year-old performed three sets of this exercise and moved on to the next one.

Prodigy next took to another cable movement to work the chest. This isolation movement focuses on the middle pecs. Pearson performed three working sets of this exercise and jumped into the next one.

Machine chest press served as the finisher to Pearson’s chest workout. He performed three working sets of this exercise and wrapped up the chest training session.

During the closing comments of the video, Pearson admitted that he is not at his best yet. However, the 27-year-old is confident that he is unbeatable if he brings his best to the stage. With formidable opposition like Shaun Clarida and Kamal Elgargni eying for the top spot in the 212 division, Prodigy is doing everything in his power to win the 2022 Olympia. The event will take place from Dec. 15 to 18 in Las Vegas, NV. It will be interesting to see how Pearson performs against the elite competition.

You can watch the full chest workout video below, courtesy of the Iron World YouTube channel: