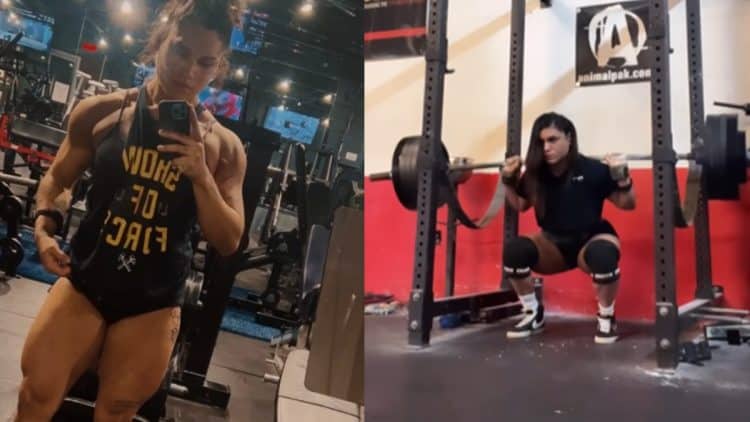 Kheycie Romero has been very active in the training room and although it is unclear whether she will compete soon, it is evident that she is preparing for something big. When she posts mind-blowing lifts, her deadlift prowess usually shines through. However, Kheycie has also made impressive improvements in other lifts as well, which is perhaps even more exciting than her record-breaking deadlifts. So, in a recent video Kheycie shared to her Instagram, she was able to accomplish a huge squat two-rep PR. She did so by successfully completing a gargantuan 516 pounds (234.1 kilograms) lift.

Kheycie Romero equipped herself with knee sleeves, lifting belt, wrist wraps, and completed her final warmup of 476 pounds (215.9 pounds). She then took a short rest and comfortably cruised through a 516-pound (234.1-kilogram) two rep personal record. To scale up the impressiveness of her newest feat of strength, Kheycie Romero’s competition PR squat stands at 485 pounds (220 kilograms), which she scored at the 2020 WRPF Hybrid Showdown II. Although we don’t know what the max weight she could squat for a single rep currently is, it is obvious that Kheycie has progressed immensely.

“Not badddddd..
Just not as good as I would’ve liked.

*The first clip of the video displays her 476-lb squat, while the second clip is the new 516-lb PR.

Kheycie Romero did not specify her bodyweight at the time of her lift, but she usually competes in the 82.5-kilogram weight class. If Romero is still around this weight then she is inching closer to the All-Time World Record. Kheycie’s one rep max is definitely above 520 pounds (235.9 kilograms), while Hunter Henderson holds the record of 551.1 pounds (250 kilograms).

Kheycie Romero does not compete often, but she has accumulated five victories in her eight sanctioned powerlifting competitions. She has yet to break a World Record, but has also expressed the desire to do so in the deadlift event. In addition, Kheycie can now also chase the squat record.

The last time Kheycie Romero competed was almost exactly one year ago, but it doesn’t seem like she will step back on the platform anytime soon. Although she has made enormous improvements, it seems like she is purely aiming to break World Records. So, there is a possibility that Kheycie will only decide to compete again once she is ready to make history.