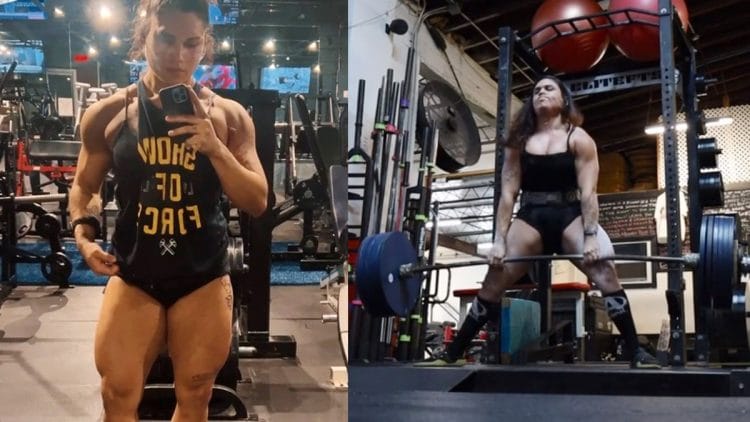 Kheycie Romero is one of the greatest pound-for-pound women deadlifters in the world currently, but she wants to officially claim a World Record. For that reason, she is always on the chase for new PRs and World Records. Well, Kheycie’s recent training session was stellar, as she attained two new deadlifts PRs. The more notable one can be seen in the second slide of her latest Instagram post, as Kheycie locked out a 280 kg (617 lbs) raw deadlift. The first slide of Kheycie Romero’s Instagram post features a two-rep raw deadlift PR of 265 kg (584 lbs).

Her 280 kg (617 lbs) pull was not the flashiest of deadlifts, as Kheycie Romero struggled quite a bit to complete it. However, she fought for it and claimed a massive milestone. Kheycie’s pull was also raw, having only used a lifting belt to aid her in the lift. While her style of deadlifting utilizes a sumo stance, with a hook grip. This lift is just 19 lbs (8.5 kg) off the All-Time Raw Deadlift World Record, which Tamara Walcott set at the 2021 WRPF Bucked Up Showdown.

Back in April 2020, speaking exclusively with FitnessVolt, Kheycie Romero shared her plans to break the all-time world record.

Kheycie did not specify how much she weighed during her recent deadlift PR, but if she is in her usual 90 kg (198 lbs) weight class, then she managed to unofficially beat the World Record by a huge margin. Samantha Rice currently holds the record in the 90 kg weight class, having deadlifted 273.5 kg (602.9 lbs) at the 2022 USPA Hybrid Showdown 4. So even if Kheycie Romero has to cut down a bit to get back to the 90-kg division, she still has a huge advantage over the record.

Kheycie Romero is only 28-years-old at the moment, but she has already built a very impressive resume. After 5 years of training, she has now gained some valuable experience, which will come in handy for her future training sessions. Throughout her career, Kheycie has taken part in 8 sanctioned competitions, and won 5 of them. Most notably the 2020 WRPF Hybrid Showdown II in the 90+kg weight class.

Kheycie Romero has a master’s degree in nutrition & human performance and uses her knowledge very well. She is incredible with training and tweaking details, which has been proven multiple times. Kheycie Romero programmed Danny Grigsby and since then he managed to pull the All-Time Heaviest Raw Deadlift in powerlifting history. Now Kheycie is chasing the same achievement, but just in the women’s division. Romero didn’t announce the dates yet when she’ll compete next, but judging from her recent training session, it will be great to see if she manages to break some records in the process.