''The Butcher" and Labrada joined forces to crank out an arms workout before taking stage as guest posers at the 2022 Colorado Cup. 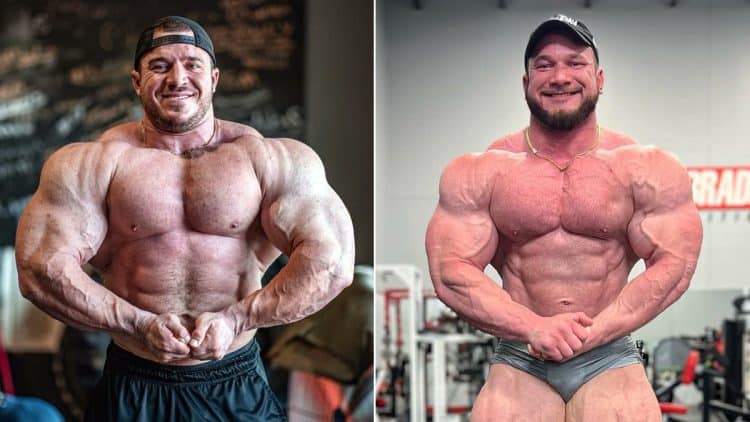 Bodybuilders Brett Wilkin and Hunter Labrada compete in the Open division of the IFBB Pro league and are considered among the best bodybuilders of their generation. Wilkin has seen several ups and downs in his bodybuilding career. After earning his Pro card in the Classic Physique division, Wilkin competed in the 212 division at the 2019 Puerto Rico Pro and the 2019 Toronto Pro Supershow, earning tenth and sixth place finishes, respectively. Two years later, he switched to the Open division and surprised everyone by placing second at the 2021 Chicago Pro. He last competed at the 2022 Arnold Classic, where he finished sixth.

Labrada is a top Open division competitor and the son of bodybuilding legend Lee Labrada. The 30-year-old made his professional bodybuilding debut by winning the 2020 Tampa Pro, which earned him a direct qualification to the 2020 Olympia, where he finished eighth. Intent on getting to the top, Labrada won the 2021 Chicago Pro and improved his standing at the 2021 Olympia by grabbing fourth place.

Labrada and Wilkin have posed together at NPC Colorado Cup for three consecutive years. The duo hit the gym on the day of the guest posing and did an arms workout to get their guns pumped for the show. The session was recorded in August at the time of the Colorado cup event in Denver and posted on Wilkin’s YouTube channel on Sept. 13, 2022.

Brett Wilkin and Hunter Labrada go through an arms workout

Wilkin and Labrada started the workout with some resistance band movements to open up the joints and get the blood flowing into their arms. The duo bounced exercise ideas off each other as they went through the warmup routine. The ensuing training session consisted of antagonistic exercises that includes alternating between biceps and triceps exercises. This method allows muscles to rest and recover in between exercises.

This served as the first exercise of the arms workout. The preacher curl is arguably the best isolation exercise to target the biceps. Since the triceps are pressed against the pad and shoulder movement is also negated, the biceps carry out the entire movement without help from other muscle groups.

“We’ll start off here a little bit lighter, warm it up and crank it up!” Wilkin said.

Wilkin and Labrada performed the exercise unilaterally and started with a 25-pound dumbbell in the first set. They worked their way up in subsequent sets and did the final set with a 55-pound dumbbell.

The duo next took to the triceps exercise and performed the single-arm cable triceps extensions on a cable pulley machine.

While Wilkin used a rope attachment, Labrada used a D-handle bar attachment for this exercise. Keeping the shoulders locked in position is key to isolating the triceps in this exercise. This movement offers good joint alignment and a full range of motion without losing stability in the shoulder joint.

The duo shifted their attention to the biceps and performed bilateral preacher curls on the Cybex preacher curl machine.

This exercise served as the second triceps movement of the day. Wilkin and Labrada cranked out the first few sets with the rope attachment and then shifted to using cuffs. As opposed to the rope attachment, cuffs enable a wider range of motion and help achieve better muscle contraction by allowing the arms to extend all the way out.

This triceps exercise was the finisher for Wilkin and Labrada’s arms workout. Wilkin used the stretch pause principle to get the most out of this exercise and guided Labrada through it too. He explained:

The Butcher and the Labrada scion were in their off-season at the time of shooting this video. Both have now started the prep for their respective competitions and made significant progress.

Wilkin is set to compete at the 2022 Romania Muscle Fest Pro that will take place from Nov. 11-13. Scoring a win at this event is his only chance to earn a direct qualification for the 2022 Olympia.

Having finished fourth at the 2021 Olympia, Labrada is in the mix for the top spot along with reigning Mr. Olympia Mamdouh ‘Big Ramy’ Elssbiay, Brandon Curry, Nick Walker, and Hadi Choopan.

Andrew Jacked and Blessing Awodibu‘s addition to the roster has created a lot of hype in the Open division. If Wilkin makes it to the 2022 Olympia by winning the Romania Muscle Fest Pro, there is no denying that the road to victory will get more challenging for everyone.

You can watch the full workout video below, courtesy of Brett Wilkin’s YouTube channel: