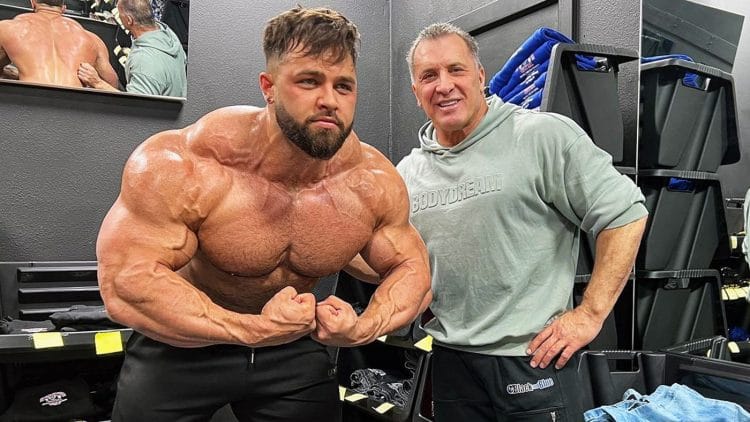 Bodybuilding star Regan Grimes is known for his activity and has been a consistent force whenever he enters a sanctioned competition. With 12-weeks out from the 2022 Arnold Classic, Grimes looks to be maximizing his time in preparation for the second biggest bodybuilding show in the world.

Regan Grimes has made it clear that his intentions are to dominate the podium at the 2022 Arnold Classic. The Arnold continues to make a remarkable impact on the sport as it was revealed that the organization would be increasing the prize money for Classic Physique from $7,000 to $60,000. While Grimes is a Men’s Open competitor, he is no stranger to competing with world-class talent, and this years’ crop of talent looks as promising as ever.

In preparation for one of the biggest events of the year, Grimes has left no stone unturned. The Canadian bodybuilding star has even sought out posing instructions from the one and only legend, Jay Cutler. Following Grimes’ 15th place appearance at 2021 Mr. Olympia, he has competed in a string of shows. He placed 2nd at Legion Sports Fest on Oct. 24, 2021. Grimes didn’t stop here, in less than two weeks he competed at KO Pro Egypt and scored 1st place, which qualified him for the 2022 Olympia. In his last show of 2021, he placed third at Prague Pro on Nov. 14, 2021.

The bodybuilder Grimes took to his YouTube channel and walked fans through a training session. In preparation for the 2022 Arnold Classic, Grimes got busy with some high-volume chest workouts.

Grimes repeated the aforementioned superset with 35lbs dumbbells. The video did not show the number of sets done or the entirety of this specific workout.

In accordance with his coach, Regan Grimes was instructed to perform four-to-five negatives before exploding upwards. Then, Sarcev counted out 10 reps with a pair of 45-pound plates on each side of the machine.

Grimes moves on to flyes at the dumbbell station where he utilizes 50-pound dumbbells for this exercise.

He fires off another superset with a pair of 25s added to the machine, and 70-pound dumbbells for the flyes. This phase of the workout ends with Grimes doing one more set of machine presses with four big plates hooked up on each side of the machine.

Grimes Moves On To The Incline Chest Press Machine

After attaching another two 25s and going for eight reps and two partial reps, the mentor and pupil move on to a different exercise.

The duo starts on another superset pairing by bench pressing a Smith Machine bar with two 45’s on each side for ten reps. Following the bench press, Grimes was tasked with performing standing flyes.

The weight for the three presses was reduced down to one plate per side.

Following a short period of respite, Grimes resumes on the Smith machine. At this point in the exercise, Sarcev had Grimes flex in between sets. Four sets were shown during the video.

Grimes utilized machine flyes and decline machine presses. The video did not disclose the amount of weight Grimes used for this workout.

Grimes and Sarcev Finish With:

On the crossovers, the bodybuilding staple stepped outside the station in order to maximize his stretch.

One 45 was on each end of the machine. During both movements, Regan Grimes worked through as many repetitions as he could muster. With 12 weeks to go before the second-biggest bodybuilding competition is upon us, it’s clear Grimes is treating his training sessions with an air of determination.