Kirill Tereshin, a.k.a. the 'Synthol Kid' provides details on his recent surgery, revealing he had to get oil and dead muscle removed from his arms 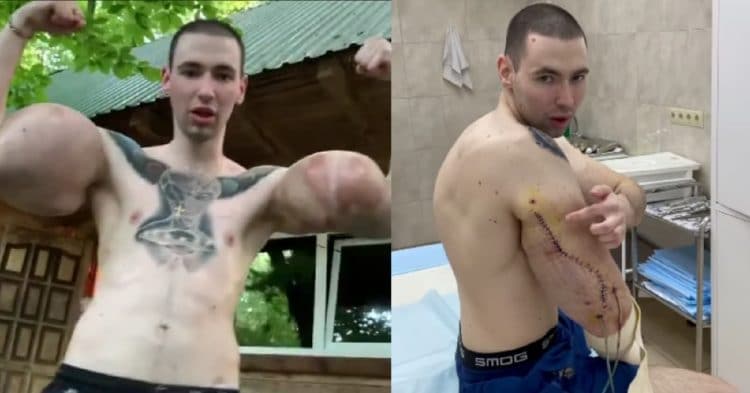 We recently reported that the “Synthol Kid” himself, Kirill Tereshin, was in the hospital getting his arms drained. Now he has provided details of what happened, and it paints a sobering picture.

For the uninitiated, Tereshin is something of a circus act in the bodybuilding community. The Russian bodybuilder has garnered fame on social media, primarily due to his unique appearance as a result of injecting Synthol oil into his arms.

The use of Synthol is not unheard of, as it is occasionally used by bodybuilders wanting to make some parts of their body look bigger before a contest. However Tereshin has abused the practice for years, even beyond the risk of life threatening health concerns.

Now it would appear that Kirill Tereshin has been forced to have the oil removed from his arms. He was recently seen in the hospital getting them drained, but had to return for a second surgical procedure.

Posting to Instagram, he explained that he had to get the Synthol oil, as well as dead muscle tissue, removed from his arms. Things were apparently so severe, that he almost lost his hands.

“The second operation was successful, thanks 🙏 the only doctor @drmelnikov who took over me and saves my hands from this poison, also thanks 🙏 @al_abazalieva for taking care of my hand (wound) after the operation, the team at UKB1 is very cool 😎” Tereshin wrote (translated via Google).

It appears by the video, and from his previous posts, that Tereshin only had a procedure done on one of his arms. Even in this most recent clip, it appears that he still has Synthol in his left arm.

This is only backed up by his previous updates, which saw the “Synthol Kid” getting just one arm drained. Even after his initial hospitalization, he was seen with that same right arm bandaged up all the way.

That said, we will certainly have to wait and see if Kirill Tereshin gets his other arm cleaned up, especially given how close things were with this situation. He already knew that he was risking his health, but perhaps this has finally been a wake up call for him.

At the end of the day, he really seems to be the type of individual who is looking for attention, which led him to this point. Time will tell if he finds a new way to get what he is looking for, that maybe does not risk his health.