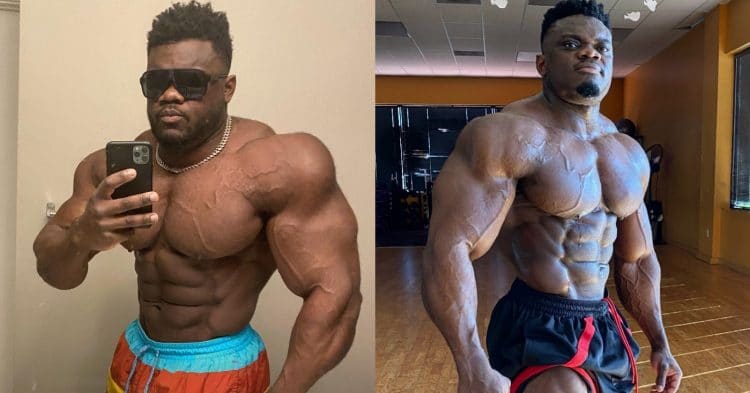 There are a lot of reasons to be excited for the pro debut of Blessing Awodibu. However he just gave us one more with a physique update that showed him with a waist that he suggests could be small enough to make a Men’s Physique champion jealous.

By the time Awodibu steps on stage for the first time as a pro bodybuilder, it will have been around four years since his last competition. Although there are a variety of factors that contributed to that, the main reason for the delay was for him to improve his physique.

It is easy to see that he has the potential for greatness, but Blessing wanted to take the chance to bulk up his physique, and prepare for the rest of the elite bodybuilders. The results of this have built up the anticipation for his debut, and mesmerized fans following his updates.

Related: Blessing Awodibu Plans To ‘Shock The World’ With His Pro Debut: ‘Everybody’s Going To Hate The Boogeyman’

However Blessing Awodibu has made sure that he is losing sight of the aspects that make his physique so impressive. In particular, he is keeping his waist small, no matter how big he seems to get.

In a recent post to his Instagram, the social media sensation shared an update on his physique that showed just how insanely small his waist is. It is so impressive in fact, that it led to him making a remark about competing in Men’s Physique where a small waist is crucial.

Naturally, it goes without saying that Awodibu is not going to be able to make it down to Men’s Physique, and that he is merely joking about this. That said, it is also worth noting how lean his waist looks here.

We have been seeing some crazy updates from Blessing over the last several months, so it has been possible to follow his prep progress. With him going head to head with Nick Walker at the 2021 New York Pro, it makes things more interesting to see.

With all that said, the biggest question mark when it comes to Blessing Awodibu, is his legs. The young prospect has been working hard to develop his package and bring up those areas, and it will be interesting to see how he looks when he finally makes that debut.

How do you see him performing on stage in May?