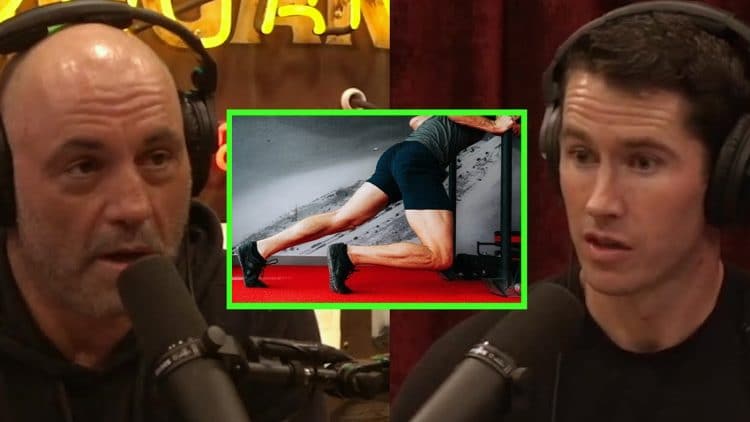 UFC color commentator and popular podcaster Joe Rogan routinely invites guests from all walks of life on his podcast ‘The Joe Rogan Experience’. More often than not, the podcasts lead to insightful information on a variety of topics that are of great value to most of us. Recently, Rogan was joined by the ‘Knees Over Toes Guy‘ Ben Patrick, who spoke at length about the benefits of sled-pulling for knee health.

It would not be an overstatement to say that having healthy knees is a prerequisite to leading a life of fulfillment and good health. Apart from age-related decline, factors like modern lifestyles, injuries, or even the construct of our favorite physical activities can significantly increase the wear and tear of the knees. During his conversation with Joe Rogan, Ben Patrick shed light on a plethora of benefits that sledding can bestow upon a person’s knees while significantly reducing or even nullifying the risk of injuries.

Ben Patrick explains the difference between sled-pulling and other exercises

Ben Patrick argued that most fitness or recreational physical activities take a toll on a person’s knees irrespective of other benefits they may yield. He further argued that pulling the sled is beneficial for this very reason as it does not put any stress on the knees.

“Every step that you’re going backward you are strengthening your knee. BUT there is a fundamental difference between the sled and any other exercise that I do. The difference is that only you move the sled so the sled never moves you.

When you do squats or anything like that, you’re taking some degree of risk. The weight is gonna move you down and then you’re gonna move it back,” Ben Patrick said.

While explaining the efficacy of sled pulling in maintaining knee health, Ben Patrick gave the example of walking on a treadmill and stated:

“The current human exercise fundamental is walking forward with a machine doing the work for you, a treadmill. It should be the human doing the work. Even pushing the sled would be so much better.

You can put an older person pushing a sled. Only they move the sled. You don’t have to be… with a squat or something like that, there’s a lot more chance of an injury.”

To get the other benefits of exercises that can potentially hurt the knees, Ben Patrick suggested that sled pulling can be incorporated into the fitness routine to a greater degree, and emphasis on other exercises like squats can be reduced.

Knees Over Toes Guy elaborates further on the benefits of sledding

Patrick elaborated further on the benefits of sled pulling and said that apart from being a good warm-up and cardio exercise, sled pulling is actually a potent foot workout.

“I think most of us humans – we’re missing training our feet.”

“You were mentioning Louis Simmons and reverse hyper and how it’s like you can rebuild the back… When you push the sled you get a very similar effect because you’re not loading your spine,” Ben Patrick added.

While everything in moderation has its benefits, too much of anything can create more problems than it solves. Ben Patrick suggested that it is very hard to overdo sledding. However, he advises doing more pulling than pushing for all the benefits listed above.

“So, first off, if a sled had 1000lbs on it, it just wouldn’t move. So you already have that difference. It’s much harder to get into a tricky situation on sled.”

Patrick added that he has not witnessed the ill effects of overdoing sled pulling/pushing yet. He also revealed that his training partner and fitness trainer, who goes by the name Mr. Infinity has actually reversed his aging with sledding.

Ben Patrick is a fitness trainer and the founder of the Clearwater, Florida-based gym, Athletic Truth Group. The gym is well-known for employing effective and unique techniques to solve knee issues. Ben Patrick’s extensive research on knee health was a result of his quest to solve his own knee problems when the conventional methods failed to deliver.

Ben Patrick gathered the information, worked on it, and successfully got his knees better. He was an aspiring basketball player that even managed to secure a college basketball scholarship. Later, he played for two years at a junior college. However, he left it behind and became a fitness trainer himself. Patrick’s expertise eventually gained him a lot of success.

Courtesy of the PowerfulJRE YouTube channel, you can watch Ben Patrick’s discussion with Joe Rogan here: