Lower Back Pain: Common Causes and Prevention For Athletes

Here’s some valuable information if you suffer from back pain. 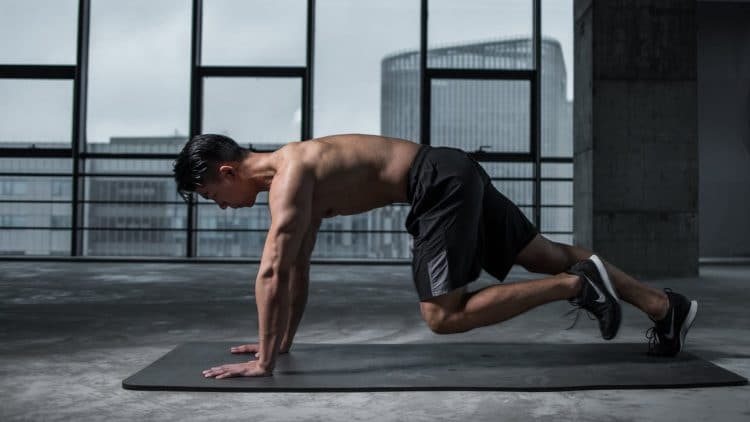 Lower back pain is a painful and inconvenient issue that affects millions of people whether temporarily or long-term.

And the several factors which are a common cause for lower back pain include physical ailments/imbalances, poor posture, bad lifting habits, etc.

And thankfully, most cases are workable.

So, let’s get into a little more detail about the common causes and how you can either prevent or improve your lower back pain.

Note: The following information is intended to be informational and helpful for some cases of lower back pain. But for more severe and prolonged cases, we highly advise seeking help from a medical professional who can more thoroughly examine you in the case of more serious causes.

4 Common Causes of Lower Back Pain

Improper lifting techniques will almost certainly result in lower back pain that you may not even feel while you’re performing a certain exercise. In fact, many times, you feel it the next day and this pain just continues to be present.

Combine improper technique with excessively heavy weight training, and you’ve got a serious problem which many don’t properly address, if at all.

And training with too much weight whether you’re lifting the weight from the floor (e.g. deadlifts), from the upper body (e.g. squats), or even overhead (e.g. snatch and other Olympic movements) is problematic.

And this is especially the case when the back is in a dangerous position combined with heavy (or even light to moderate) weight-bearing exercises.

But, excessively heavyweight loads even with proper form is not recommended either depending on the level of training experience.

Weight training must be done progressively to enable the body to adjust, but many people skip the steps and try to get to the top of the stairwell outright; which is a huge mistake.

Now, many people are either unaware of the fact that they’re lifting with bad form, or they simply lack the knowledge of how to lift safely.

So, this is a very important aspect of training that needs to be identified and corrected to alleviate or prevent the potential for agonizing lower back pain.

Weak core muscles will cause lower back pain simply due to the role these muscles play in supporting the spine and back. But thankfully, most people can simply implement exercises that will strengthen the core to solve this problem.

These are the core muscles and their functions…

Then you have your hips flexors which can become very tight or weak from over flexing, therefore causing lower back pain. And common culprits for tightness are sitting too long which shortens and tightens the iliopsoas (psoas and iliacus) muscles that stabilize the spine. Not eccentrically stretching the hips enough is another issue, commonly seen in runners.

But there’s really a myriad of issues which can cause hip tightness due to poor lifestyle habits and structural imbalances.

Although, tightness isn’t the only cause of back pain here and stretching may not be the solution if your muscles are simply weak (we’ll show you how to tell shortly).

Weak hip flexors can be due to the fact that you’re not using them enough and/or performing exercises that allow the upper legs to elevate higher 90 degrees.

So, it’s important to note that if you’re suffering from weakness rather than tightness, stretching can make everything worse, including your back pain.

A weak glute medius muscle is also a common cause of back pain due to its function as a hip abductor. And this weakness/imbalance most commonly occurs from too much sitting, as well as unequal weight distribution while walking.

Research shows a correlation between a weak glute medius muscle/ glute tenderness and lower back pain. (2)

But it also doesn’t help that this is a naturally weak muscle and, in fact, the weakest of the lower body. Plus, a weak glute medius can cause knee issues if not corrected.

If when you sit or stand you resemble the hunchback of Notre Dame, then there’s a good chance you are or at least have dealt with some lower (and mid-back) back pain.

And that’s because the stress of improper posture causes problems with not only the spine but the muscles and joints as well.

One study took 88 volunteers and had them performance posture correction exercises for 8 weeks. By the end, significant improvements were noted for lower, middle back pain, and shoulders. (3)

This is especially important to know if you live a primarily sedentary lifestyle whether that means your habits or even your work situation.

But do we really need research to prove this? Not really. If you tend to sit for long periods and/or have less than ideal posture, then you know.

Best Exercises For Lower Back Pain

The exercises which are best for strengthening the core for the benefit of preventing or helping lower back pain will involve those which target the transverse abdominals or deep core muscles. (4)

But if your hips are the cause, then we’ll show you some exercises to remedy this.

And if the glute medius is the problem, it’s fixable.

Here are some effective exercises you should be doing…

The great thing about these core exercises is that you really should be doing them anyway for the awesome benefits.

The hanging leg raise and its variations are excellent for developing the core. Leg raises variations are rather difficult but also some of the most effective by the same token.

The legs are often heavy enough without adding weight and this is a great convenience factor as well. But you never want to swing your body during a leg raise variation as this limits the full engagement of the core which is necessary to hit these deep muscles.

And you’d be focusing more on the hip flexors instead of primarily the core.

Planks are truly a great exercise for improving your core strength. But the basic plank is really only effective for beginners which is ok in that case. However, most people who do planks regularly would benefit more from an advanced version.

And that’s where the elbow to knee really shines. This variation challenges anti-rotational stability and anti-extension, therefore, it’s an ideal movement for avoiding lower back issues.

The Pallof press is one of the most underrated core exercises which not only improves stability and strength in the core, but the entire body is involved here including the posterior chain (a significant contributor to stability).

Check out our Pallof press guide.

To determine if you have tight hips, try the modified Thomas test shown below…

If your leg drops down and does not make contact with the surface, then you’re looking at some hip tightness. In this case, you can employ some stretches.

To determine if you have weak hips, try this test…

If you can maintain the knee above the hips then you’re likely not suffering from weak hip flexors. But if your leg drops shortly after, then the psoas and iliacus are weak since these are the muscles that allow you to maintain the hips in the above 90-degree position.

Ok, so now that you know what the issue is, here are a few exercises to correct them. These exercises are also helpful for posture since the hip flexors tie into postural issues.

Here are a few effective exercises for strengthening the glute medius if you have a weakness.

And how you can tell is if you have a hard time lifting your leg to the side, or if you stand on one leg and your hips drop.

This is a great exercise for the glute medius and you only need your own body weight.

This is another easy option to start to improve strength in your glute medius. And all you need to do is raise each leg up to strengthen the glute medius for the desired number of reps.

Use a Weightlifting Belt

Using a weightlifting belt is very beneficial for preventing lower back pain because this handy tool is essentially like a second pair of abs that creates anterior support from the additional intra-abdominal pressure provided; which is necessary for keeping the core tight and spine stabilized for the big lifts. (5)

The torso must be as rigid and stiff as possible to pull off maximal lifts without injury.

But you only want to use a belt during maximal lifts because you don’t want to take away from the natural intra-abdominal pressure from the core.

Check out our top lifting belt picks and guide.

Lower back pain is never fun and it can really put a damper on your ability to train and perform up to par. But the good news is, most people can effectively implement certain exercises to prevent and even improve this debilitating back pain.

But first, you should know why you’re suffering and then you can take the best possible course of action to correct the issues.

We hope you found this information helpful and just remember that maintaining a healthy body requires regular maintenance like anything else you’d expect to keep functioning at an optimal level.

Best Back Exercises to Build Strength and Muscle for CrossFit

With the 2022 Arnold Classic scheduled for early March, bodybuilders are trying to squeeze the most out of all of...

Thoracic Extensor Exercises for A Stronger Upper Back

When it comes to back training, most exercisers focus on their lats, rhomboids, traps, and erector spinae. This makes a...

13 Best Cable Machine Exercises for A Bigger Back

Almost every modern-era bodybuilder has used the lat pulldowns and seated rows to build a muscular back. Purists may say...

Fitness celebrity Mike O' Hearn walked his fans through a detail-focused back workout. The former Gladiator (competition show) is doing...

Your spine is amazing! Consisting of 33 bones called vertebrae, intervertebral discs, numerous muscles and ligaments, and dozens of nerves,...