Winter is here. Mamdouh 'Big Ramy' Elssbiay looks shredded with noticeable cheek bones as he enters the final stages of his preparation for the Olympia 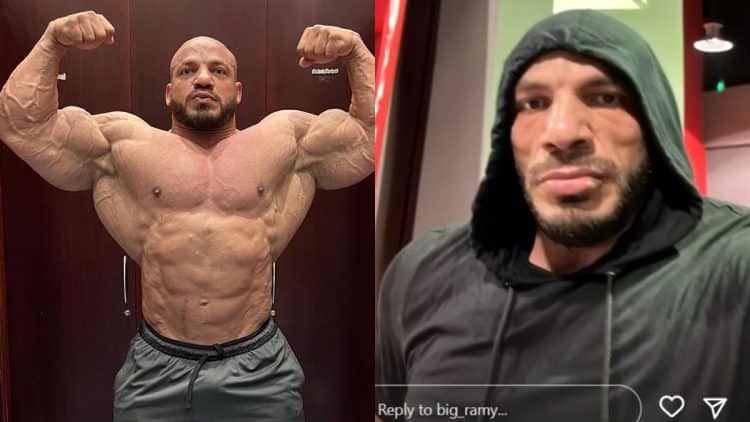 ‘Big Ramy’ goes into the contest as the favorite to take his third Sandow trophy home. He endured a shaky start to the season and faced heat from the community for missing a guest posing appearance at the Pittsburgh Pro in May. Although he later apologized to Jim Manion and the IFBB Pro League, some in the sport started to doubt Ramy’s commitment to the sport.

Last month, the champ once again showed off his progress during a guest posing appearance at the Dennis James Classic just seven weeks out from the 2022 Olympia. He showed off his huge frame while posing at James’ third-ever IFBB Pro League Qualifier contest in Germany.

Ramy will face serious competition from Men’s Open standouts this year including Nick Walker, William Bonac, and Hadi Choopan. Renowned bodybuilding coach Hany Rambod recently gave his breakdown of the upcoming lineup in the Open division. According to Rambod, Ramy will need to combat the added size of the ever-consistent Hadi Choopan, who has never placed below fourth at the Olympia. He believes Choopan could get a top two placing if Ramy or 2019 Mr. Olympia Brandon Curry miss the mark this year.

Chad Nicholls, the champion’s coach, recently shared a massive physique update of Ramy, backing him to look better than ever at 325 pounds. Ramy followed that up with another unreal physique update six and a half weeks from the Olympia.

In a recent story posted to his Instagram account, ‘Big Ramy’ showed off his crazy death face just four weeks out from the nearing 2022 Mr. Olympia. When the cheek bones start to pop out, that typically means a bodybuilder’s fat percentage is low.

Big Ramy’s cheeks are sunken in as he enters the final phase of his preparations for the Olympia.

Besides Big Ramy, powerhouse William Bonac has emerged as a frontrunner to win the show. Bonac previously defeated Ramy at the 2018 Mr. Olympia and narrowly missed out on the top prize to Curry. Bodybuilding legend Flex Wheeler cautioned Bonac not to play the size game with Ramy, much like he did with icon Ronnie Coleman during his respective career.

Earlier this week, coach Milos Sarcev sat down with Flex Lewis to share his analysis of the Men’s Open division. He argued that ‘the world wants to see’ Ramy compete against Nick Walker on stage and favored the champion to win for the third time in a row.

There were concerns about Ramy’s lower body muscle development after a physique update showed a ‘hole’ in his right quad. His coach Dennis James pushed back on the idea that the dent came from injections and suggested it was from a lack of blood supply in the area.

Based on the latest update, Big Ramy looks determined to keep his title. He is leaving no stone unturned and plans to bring is best package to date at 2022 Mr. Olympia.