Lewis is ‘toying’ with the idea of doing something with ‘Olympia as the end goal’. 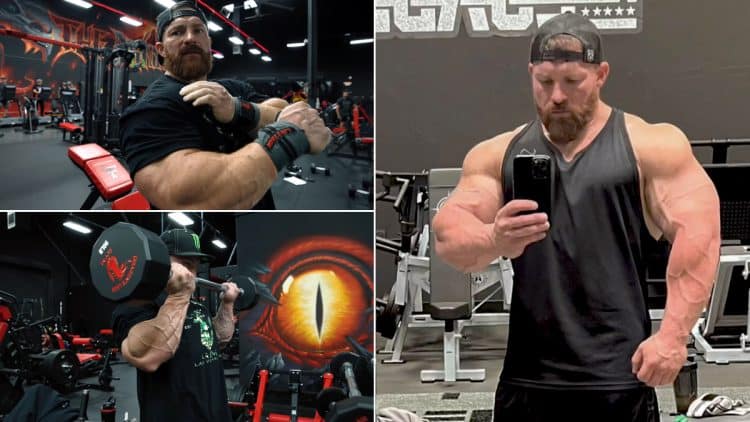 Bodybuilding legend Flex Lewis retired from competition with a lasting legacy. However, he is still killing it in the gym to maintain the physique that earned him success in the sport. Lewis is a Welsh IFBB Pro bodybuilder. He is best known for winning the 212 Olympia title a whopping seven consecutive times from 2012 to 2018. Lewis’ sheer dominance in the division gave rise to speculations about his chances in the Men’s Open division. While there was excitement around Lewis potentially competing in the open division, he put a full stop to the speculations by issuing a retirement statement earlier this year. The 37-year-old started a new TRT (Testosterone Replacement Therapy) protocol after retirement and has also significantly downsized compared to the peak of his bodybuilding career.

Lewis owns Dragon’s Lair, one of the most popular gyms around the world, and keeps himself busy with exciting endeavors in retirement. On fans’ popular demand, he recently went through an arms workout at his gym. The video of this session was uploaded on Lewis’s YouTube channel. So without further delay, let’s take a closer look at the detailed account of this training session.

Lewis stated that he weighed approximately 210 pounds at the time of recording the video and was wondering if he should undergo a transformation. While he has shut down all rumors of a potential return to competitive bodybuilding, Lewis mentioned ‘toying’ with an idea that can have ‘Olympia as his end goal’.

“Today, officially… I am the lightest I have been since my 212 days. I think right now I am weighing around 210 pounds. So I’m toying with the idea of doing something new, something that can have Olympia as my end goal!”

Lewis stated that his days of training each muscle group with five or six different exercises are behind him. Therefore he included three exercises each for the biceps and triceps in this training session.

Lewis started the arms workout with this triceps movement. The cable pushdowns are also an effective way to warm up your elbow joints, which are crucial in performing most arm movements. Lewis performed a few good sets of this exercise to get the party started and used wrist wraps for the heavier working sets.

The seven-time 212 Olympia champion stated that he had fairly weak wrists when he started bodybuilding. It was a result of wear and tear during his gymnastics and rugby days. He compensated by using wrist wraps for the heavier sets. However, safety is another reason why he started using them.

“My wrists are pretty strong now. But I still like (wrist wraps) for stability. Especially when you are pressing heavy…” Lewis stated. 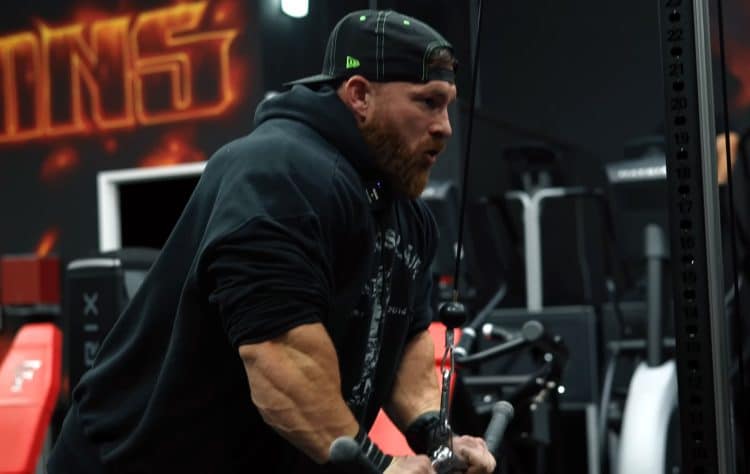 Lewis performed triceps dip presses on a plate-loaded machine next. Lewis stated that he prefers to perform the movement while standing and facing toward the machine.

“When I lean into this, I kind of feel like I am pushing directly down,” He said.

Lewis started out light and then slowly increased the weight for subsequent sets. He used seven plates for the top set. Shoulder joint stability is of utmost importance for complete triceps stimulation. As the weights get heavier, people tend to push the weight down using shoulder strength. For the top set, Lewis had his training partner hold his shoulders down to maintain stability and focus on his triceps. After cranking out a solid set with slow and controlled movements, Lewis took to the third and final triceps exercise of the day.

“I had a f***ing core workout doing that,” Lewis’s training partner joked. 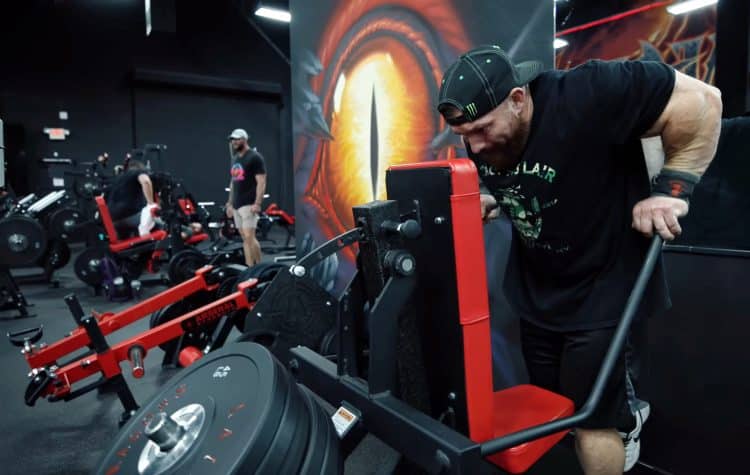 Lewis next took to this exercise to work the triceps further as he appreciates the stimulus it gives. He feels that very few people do skullcrushers with dumbbells. Doing skullcrushers on an incline bench allows a greater range of motion and thus enables more stretch in the triceps. Lewis did the first set with 35-pound dumbbells to get a hang of the movement before jumping into heavier sets.

“Dumbbells are touching my (anterior delts). You could do more of an external stretch right back and touch the medial head of your shoulders. But in this case, my triceps are so full of blood that even if you just hit the front delts, I am getting enough stretch…” Flex Lewis said about the technique.

He then used incrementally heavier dumbbells to do the subsequent sets and performed the back-off set with 35-pound dumbbells. Lewis stated that he does not think about targeting different heads or different parts of the muscle when it comes to the biceps and triceps. He explained:

“When I go in, I just change the movement pattern. So obviously when you’re talking about shoulders, you’re hitting front delt, medial head, rear delt, yes! There’s a focus on that. But when it comes to triceps, I am not thinking of hitting a certain angle to hit this head. I’m just going in to f***ing demolish my triceps, you know!” 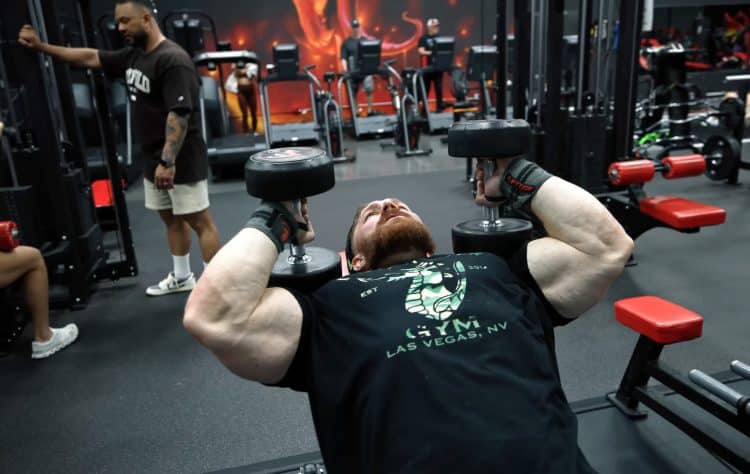 Following this exercise, Lewis shifted his focus to the biceps and did three exercises to stimulate his anterior upper arms.

Lewis started the biceps routine with standard dumbbell curls to stimulate the muscle. Once again, Lewis did the first set with relatively lighter weights (30 pounds) to get the hang of the movement. Lewis stated that twisting the wrists slightly while lifting the dumbbells during this exercise significantly increases the amount of tension and flexion in the biceps.

“That pinky turn is so imperative and so neglected in doing these exercises, these movements…” Lewis stated. 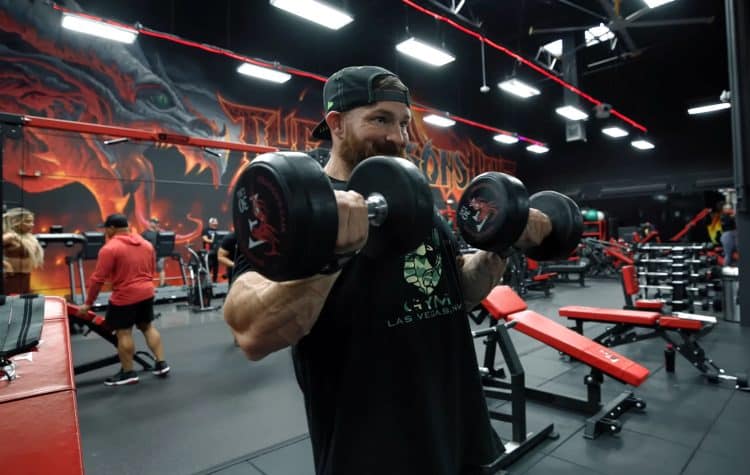 Lewis did the working sets of this exercise with heavier dumbbells and took to the next exercise.

After firing up his biceps with free weights, Lewis took to this cable machine movement next. The muscles remain under constant tension during the cable machine exercises, helping achieve hypertrophy.

“Even when you want to rest-pause, just let the bar hold, and at all times the bar is under tension. There’s never a time where it’s relaxed,” Lewis added.

While the seated or standing curls are the most common dumbbell curl variations, Lewis did this exercise lying on the floor with his knees bent. This position presses your back and shoulders firmly against the floor and does not allow you to perform a curl by jerking your upper body.

“When you’re lying on the ground, it takes all the momentum away from you,” Lewis explained. 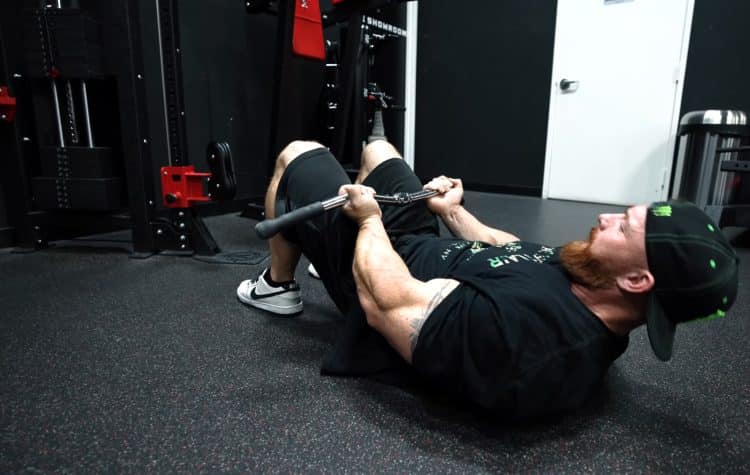 Lewis did the first set with 100 pounds on the stack. He then performed the subsequent sets with incrementally heavier weights.

This biceps exercise served as the finisher to Lewis’ arms workout. The 37-year-old performed a few solid sets of barbell curls with slow and controlled motion and wrapped up the training session.

Even after retiring, Lewis remains the gold standard of the 212 division with his accomplishments and hard-to-beat records. The fact that he is contemplating his next move, with Olympia being the end goal, is a testimony to the fact that he still has a passion for competitive bodybuilding. Irrespective of what he chooses to do in that regard, Lewis remains a source of motivation for millions around the world with his bodybuilding knowledge and amazing content.

You can watch the full workout video below, courtesy of Flex Lewis’s YouTube channel:

Andrew Jacked is on a quest to realize his Mr. Olympia dream in the first year of his pro bodybuilding...

Urs Kalecinski is paying attention to each part of his physique to tighten the loose ends before the 2022 Olympia. The...