‘Anorexic Dog’ Hafthor Björnsson vs ‘Fat Pig’ Eddie Hall Official Face-off: ‘You Only Won the WSM Because I Retired.’

Hafthor Björnsson and Eddie Hall sat down for an official face-off and spoke about their previous arguments. 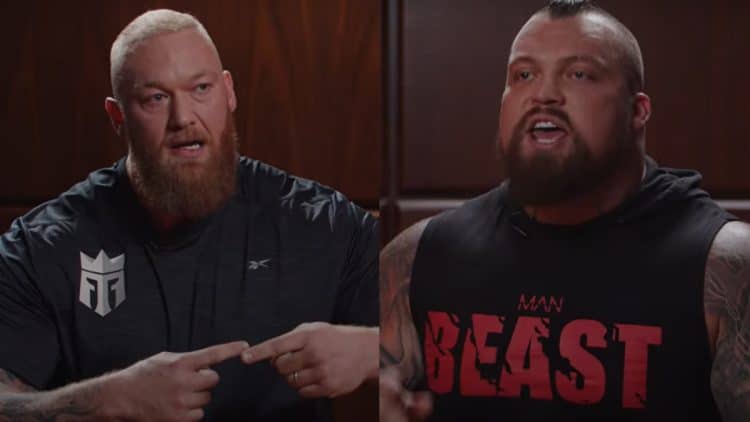 The long-awaited boxing match between two of the world’s strongest men is just around the corner. Hafthor Björnsson will fight against Eddie Hall on March 19th, 2022, inside the Dubai Duty-Free Tennis stadium in the United Arab Emirates. It is considered to be one of the heaviest boxing matches in history, and both men are extremely powerful hitters. The build-up for this fight has been going on since 2017, so Björnsson and Hall have developed a serious dislike towards each other.

Björnsson and Hall had an unexpected face-off recently, which ended with the guys spitting on each other. Hafthor Björnsson also accused Hall of severely injuring another person. However, usually, the fighters have an official face-off, where they get to explain their reasoning for dislike of each other. Earlier today, Hafthor Björnsson and Eddie Hall had their official pre-fight face-off, and it was packed with trash talk and insults.

Even before the interviewer asked the first question, Björnsson and Hall had already started arguing. At the start of the official face-off, Hall offered to shake Björnsson’s hand in an act of fair play. However, after shaking hands, Hafthor mentioned the allegations of him not shaking Hall’s hand at the 2017 WSM. Björnsson states that he did, but Eddie Hall remained with the opinion that the handshake at the WSM was not genuine, to which Björnsson replied,

The interviewer was trying to calm the situation down, but Hall and Björnsson could not stop talking about the 2017 WSM until the moderator stopped them. Once things slowly calmed down, Hall was asked for his opinion on the recent Face-off incident.

The subject quickly moved on to the 1 million dollar charity wager, which Hafthor Björnsson had previously denied. Eddie Hall gave Björnsson another chance to accept the offer, but they quickly got sidetracked. Hall explained that his injuries won’t be an excuse if he loses, and that he is ready to donate the million in that case.

The moderator then asked the guys about the 2017 WSM disagreement, and Eddie Hall stated,

“That’s what it’s all about. He smeared my win and never apologized. I am here to correct it.”

To Hafthor Björnsson it is not all about the WSM disagreement, as 5 years have passed, but he took Hall’s sh*t talk too personal.

“I obviously live rent-free in his head. Everything he does and says is about me… I would not want to be him.” said Björnsson.

“You only won World’s Strongest Man because I retired.” replied Hall.

Related: Hafthor Bjornsson Admits Being ‘Fatigued’ With Training Ahead Of The Eddie Hall Fight

The interviewer diverted the subject and asked Eddie Hall about the Deadlift World Record. Björnsson’s record plays a big role in this fight, as Hall held it before him. In addition, immediately after breaking the record, Björnsson challenged Hall to a boxing match. Eddie explained why he doesn’t acknowledge the record, despite Magnús Ver Magnusson being the main referee.

“He (Magnús) told me he did not want to referee it because it was Bullsh*t… You did it in your home gym… Your dad weighed the plates.”

Hafthor Björnsson did not agree with any of the points that Hall put up, and stated that his record was more supervised than Eddie Hall’s record.

As it is a sensitive subject for both men, they started insulting each other once again. Despite carrying huge and shredded physiques, they decided to slander each other for their bodyweight.

“Look in the mirror you fat pig.” said Björnsson

“You are a skinny anorexic dog with AIDS.” replied Hall.

Since Hafthor Björnsson has been involved in a few boxing matches, Hall was asked for his opinion about them, and he was not impressed by them. Hafthor Björnsson previously had two exhibition matches against Steven Ward and Simon Vallily. In addition, he won against Devon Larratt by a first round TKO.

“I will do my part on Saturday, and I will outbox him… After the match on Saturday, I am gonna move on, and just focus on my life.” said Björnsson.

“I can just look you dead in the eyes, and I can say I’m going to knock you out. End of story.”

Courtesy of iFL TV YouTube channel, you can watch the full video here:

Only a few more days and we will get to see a real-life Clash of the Titans. Usually, the fighters love to overreact before the match, but it seems like Björnsson and Hall are 100% genuine. Their pride will be on the line this Saturday, so we can expect a brilliant match.