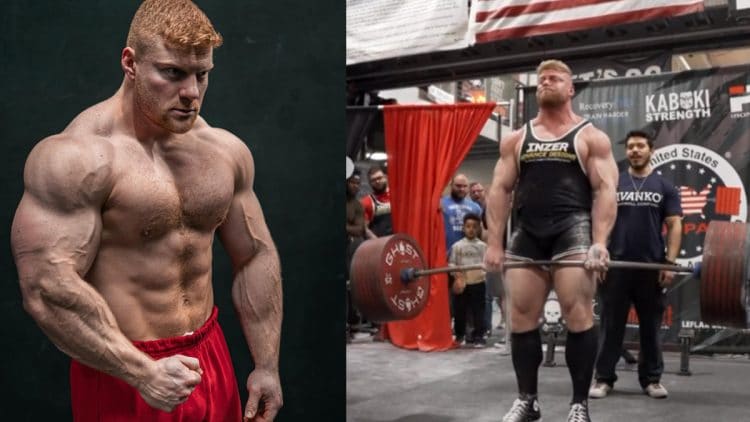 It seems like every once in a while in bodybuilding, an athlete with monstrous strength just emerges out on the scene and dazzles everyone. This time it’s an IFBB Pro, Kyle Kirvay, and he just might be one of the strongest bodybuilders ever. After posting many incredible lifts in training, Kyle was flooded with fans’ inquiries about his powerlifting career. He tried it out and posted a 1005 kg (2214 lbs) Total on his first try. It is uncommon to see these kinds of lifts from bodybuilders, as they focus more on time under tension. Furthermore, these numbers are more common for powerlifters and strongman athletes.

Over the weekend, Kyle took part in the USPA Battle at Atilis, which was held in Atilis Gym, Bellmawr, New Jersey. He competed in the Classic Raw 140 kg category and performed well. However, Kyle’s squat and deadlift looked extremely easy, which is probably just a lack of experience in deciding what weight jumps he should take.

You can watch all his lifts here:

Kyle was born on March 17th, 1995, making him 26-years-old currently. He has a lot of time to further improve, and it would be interesting to see him specialize in powerlifting. Kyle has a lot of potential, as he just joined an elite 1000+ kg Total club without even using a lifting belt on the deadlift. Even though Kyle is very successful in bodybuilding, he looks like a potential powerlifting All-Time Record Holder in the future.

Kyle Kirvay has got the perfect mix between strength and a pleasing physique, which stems from his professional bodybuilding career. He started competing in 2017, and took part in three competitions. His best placing in 2017 was the NPC Steve Stone Metropolitan Championships where he finished in the first place. The next year would be even better for him, as he got the IFBB Pro card in two distinct divisions. Kyle won the 2018 NPC Universe Championships in the Men’s Heavyweight and Classic Physique categories. He only competed once after that, which was in the 2020 IFBB Chicago Pro, and finished in 16th place in Men’s Open.

Kyle is regularly compared to Larry Wheels, because of the similar transition to powerlifting, mind-boggling strength, and being approximately the same size. Larry holds the All-Time World Record in the 140 kg category, as he totaled 1075 kg at the 2020 XPC Arnold. Kyle could most definitely be a challenger for that record and just needs to gain some experience and improve a small amount in each lift.

If Kyle keeps progressing with his strength, and also continues competing in bodybuilding, he could be compared to some of the strongest bodybuilders ever. Those include 8x Mr. Olympia champion Ronnie Coleman, Johnnie Jackson, Chris Cormier, Tom Platz, Two-time Mr. Olympia Franco Columbu, Stan Efferding who all had accomplished some serious feats of strength.

FitnessVolt reach out to Kyle, and he explained that he plans to do a complete 12-week prep for a powerlifting meet this year. Kyle also stated that bodybuilding is his first love, and that he plans on returning to the stage either this or the next competition season.

Now it is all about waiting to see what Kyle will decide to do in the future. If he continues his career, it will certainly be a blessing to the sport of powerlifting. Breaking National and State records in his debut is a perfect start, but Kyle has the potential to do even more.