Powerlifter Larry Wheels is no stranger to ridiculous feats of strength 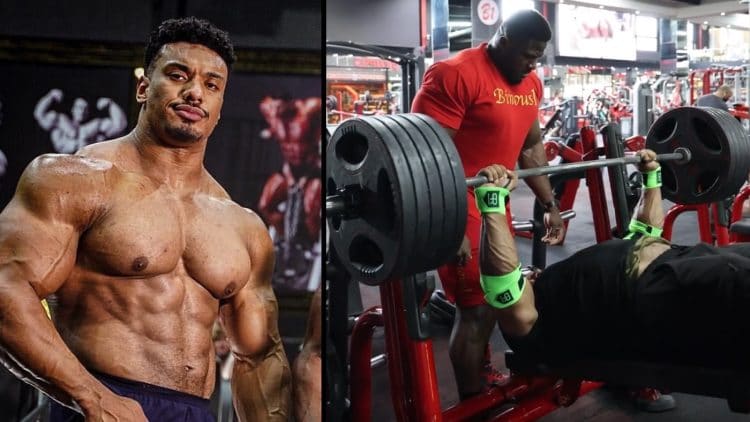 Just two days into 2022, a versatile strength athlete Larry Wheels started posting some huge lifts. He did a chest workout with a bodybuilding prospect, Andrew Jacked, and shared a mind blowing lifting video of 220 kg (485 lbs) decline bench press for 12 repetitions on his Instagram. Larry has not done the decline bench press for a very long time, but it looks like he is still very comfortable with it. Larry used wrist wraps and elbow wraps to aid him in the lift.

Larry Wheels and Andrew Jacked started their chest day with a decline bench press. Wheels gave Andrew the chance to choose which variation of the exercise will be done, and he chose the normal barbell variation. They did 7 sets of 8-12 reps, with the weight ranging from 60 kg (132.3 lbs) to 220 kg (485 lbs). Larry pointed out that he has to use his elbow wraps to ease the bicep pain, caused by a heavy arm wrestling workout.

Larry and Andrew then moved on to the rear delt fly machine, and didn’t disclose what weight they were doing. They didn’t stay long there, as they moved to the smith machine incline bench press. It is not a standard incline press, as they don’t lock out or come all the way down, the goal is to keep time under tension as long as possible. The rep range was 8-12.

“We’re doing the incline press, but keeping the elbows flared, so we get a good squeeze on that upper shelf (chest). And yes it is dangerous to flare the elbows on any press, if you’re going heavy… I wouldn’t go more than like 40% (of 1RM).” said Wheels.

Larry and Andrew then did a superset consisting of incline tricep extensions and dumbbell concentration curls. Larry also explained how to workout for a better physique.

“You don’t build a beautiful physique by just doing one rep maxes all the time. You need to have full control of the weight and to do that you can’t lift so heavy.” said Wheels.

You can watch the full workout here:

To finish the workout, Larry and Andrew completed a different variation of the fly machine. The goal was to use the last bit of strength they had and get a great pump.

Larry Wheels is always giving his all on every exercise, that being said, he pointed out that the bench press was very painful for him because of his bicep strain, and that he doesn’t recommend pushing past the pain as it can cause an injury.

Larry is a powerlifting phenom and dominated at the top level. Not only that he has also trained in the Strongman, arm wrestling, and won his first bodybuilding contest at NPC Gold Coast Muscle Classic in California back in 2018. He’s best known to break his own PR’s in the gym.

Shaun Clarida Gives Health And Physique Update: “No Plaque Within The Arteries Of The Heart”