Larry Wheels and Women's Bodybuilding pro Helle Trevino team up for an intense back day workout centered around building up mind-muscle connection. 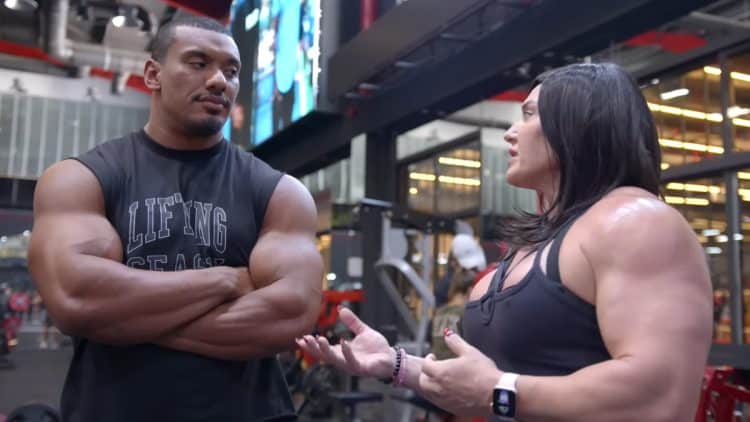 Powerlifting phenom Larry Wheels is known for his remarkable strength and willingness to push the pace inside the gym. In a recent collaboration, Wheels and IFBB Pro Helle Trevino demonstrated a series of exercises designed to build bigger and fuller backs.

Having competed in sports like powerlifting, bodybuilding, and strongman, Larry Wheels knows his way around pumping iron. Wheels intended to enter another strongman contest this year, when he planned on bringing his talents to the 2022 Middle East’s Strongest Man competition. Wheels recently withdrew his name from the contest, however, as a result of a back injury.

Female bodybuilder Helle Trevino made a name quickly in the league with staggering size and impressive muscularity. The detailed separation in her hamstrings is one of her best weapons. She has entered the prestigious Olympia contest twice now and reached the podium on both occasions.

In 2020, she competed at two IFBB Pro League shows. First, Helle finished runner-up at the 2020 Rising Phoenix Arizona Pro and then performed incredibly well in her Olympia debut, which saw her earn third place.

Helle Trevino picked up where she left off a year prior. She placed second once again at the 2021 Rising Phoenix Arizona Pro show. After that, she brought improvements to the Olympia stage. Trevino nearly won the Women’s Bodybuilding title at 2021 Olympia, but ultimately found herself in second place, to champion, Andrea Shaw.

At the beginning of this year, Trevino revealed a shoulder tendon injury prevented her from competing at bodybuilding shows. While she’s still nursing injuries, she joined powerlifter Larry Wheels for a demanding back workout, nonetheless.

Find a full list of the workouts used in the video below:

Note: Sets and reps were unavailable based on the footage provided

Trevino is still planning to attend 2022 Olympia this winter despite being unable to compete.

“Yeah, I had a double tendon here. My supraspinatus and my bicep tendons tore and I had surgery. So, I’m a little bit cautious. That’s why it’s also going to be epic that I’m going to be out of competition this year, but I’m going to be there still at the Olympia supporting.” Helle Trevino said.

Since Trevino is still rehabbing injuries, Larry Wheels decided deadlifts weren’t a necessary exercise for this back day training session. After watching Larry Wheels fire off some reps, Trevino said she saw similarities between her and Larry’s technique.

“So, I can see that we actually train pretty similar, like you know, bodybuilding training is usually like very controlled, with a good contraction. You train the same way. I was really curious with your style because your background is powerlifting, which is off like explosive or fast.” Trevino shared.

“It is 90% of the time but the other 10% with other bodybuilding workouts, anything that’s outside squat, bench or deadlift, or a core heavy compound movement will be done bodybuilding style.” Larry Wheels told Helle.

Wheels talked about the importance of neck position while performing rows in just about any capacity.

“That’s related to neck position. If you lean forward, then that should be straight and towards your spine. Larry said. “Same with deadlift, any lift really. Let your neck move with your back. Don’t try to look forward to see yourself in a mirror for example.”

According to Helle Trevino, a person practicing this exercise can find out if they have proper form by using a broomstick.

“Yes. You should be able to take a broomstick [pretends to place it down the center of Larry’s back] and it be straight.”

“It does make the connection easier.” Larry told Trevino.

Additionally, she stressed that in order to get a thorough back workout, it’s important to activate the rhomboids, upper lats, lower lats, upper traps, and the mid traps.

Trevino says that performing rows is not a saw-like motion, instead they should be performed by adjusting the angle for each repetition.

“I wish people that start out in the gym, would start by hiring a personal trainer.” Helle Trevino shared.

After finishing a set, Larry said that new gym-goers should try to enlist a fitness trainer instead of learning how to do workouts on YouTube.

“Get a coach.” Larry Wheels suggested. “A coach can shortcut you on what you’re supposed to be doing rather than you trying to learn everything by yourself with YouTube or what other people at the gym are doing.” 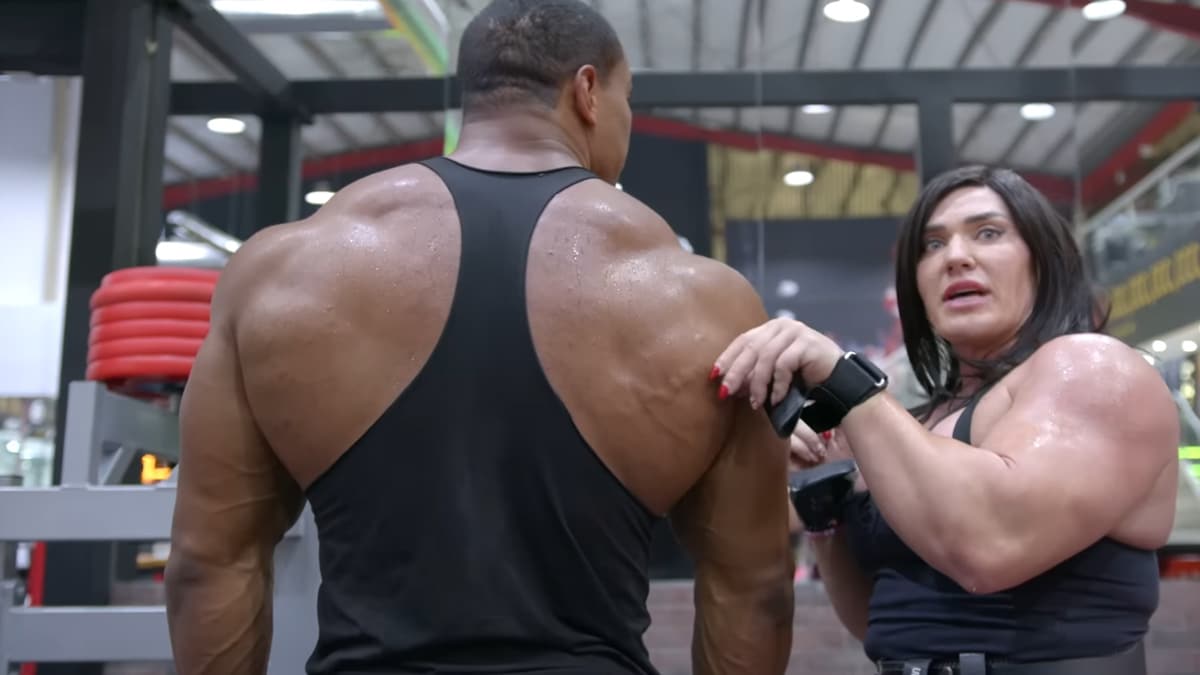 Wheels pumps up Helle before she fires off one of their more demanding workouts of the day. Each athlete took turns performing T-bar rows with handles. Wheels and Trevino suggested taking 10-second rests in between sets.

“It’s heavy now because it’s been a lot of reps.” Helle Trevino said. “Just pull it all out.”

Helle Trevino had an important tip when it comes to doing rows.

“Partials at the top, this is just squeezing, continuing the tension. So… on this one, it’s crucial do not let go of the tension, the minute you let go, you’re done.” Helle Trevino added. “You have to know, you have no break on the last one. You can’t just stop and breathe or whatever. You have to keep the tension. Once it’s gone, that’s it, your set is over.”

After adding a few weight plates, Larry got busy with a couple of his own intense sets. While performing a few reps, Trevino told Larry to pull with his elbows.

“Keep your wrists straight. Only pull with your elbow. Forget that you have a forearm. Again, don’t pull too far. Feel this part of the muscle. So, you only want to go to your rib with your elbow.” Trevino explained. “You’re pulling it into your rib cage, and then down. It’s not like as if you were doing serratus [anterior muscle].”

Helle Trevino says fixing the shoulders at the same point during each repetition will garner better results.

“They killed me today, especially with that drop set. 50 reps in like a minute.” Wheels said.

Despite sitting on the sidelines, Helle Trevino has made the most of her time away from the stage. After all, training with a powerlifter as decorated as Wheels will surely help facilitate improvements to her physique.

As of this writing, it remains unclear when Larry Wheels and Helle Trevino will be back in action. Judging by their intense back day, Trevino plans to make a statement in the IFBB once her injuries are fully healed.