"The Mutant" gave his take on the reigning champion's 2022 Olympia chances after his massive physique update: 'If he comes in even slightly off... he can be open to anyone' 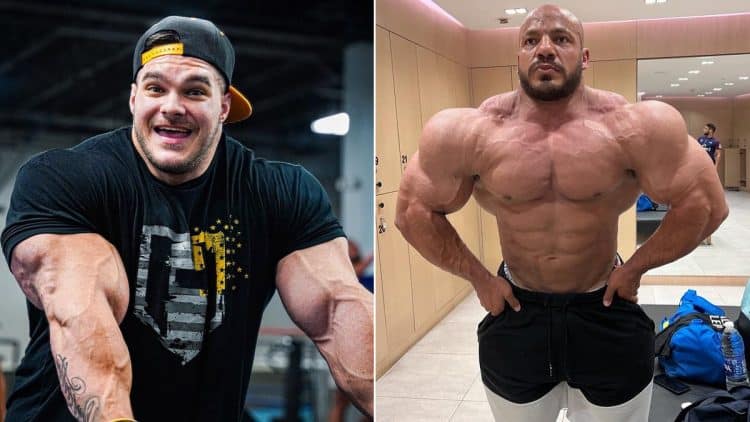 If there is an Open class competitor that can match the imposing build of reigning Olympia champion Mamdouh ‘Big Ramy’ Elssbiay, it’s Nick Walker. In a recent video shared on YouTube, Walker said that if Ramy comes in shredded, he will likely retain his crown as Mr. Olympia later this year.

Nick Walker’s 2021 rookie season has been one of the most successful in the sport’s history. “The Mutant” brought a dialed-in package to the New York Pro last year, which resulted in a first place finish. From there, he brought improvements to Ohio and won the 2021 Arnold Classic on his first attempt. Before finishing off the season, the New Jersey native attempted Olympia and landed in fifth place at the show that was won by Ramy for a second year in a row.

Walker decided to focus his efforts solely on winning his first Sandow trophy this year. Despite taking time away from shows, he’s kept fans updated on his progress. As of late, Walker garnered headlines after demolishing 200-pound dumbbell presses for 10 reps. Training alongside his new coach, Dominick Mutascio, the Open standout has passed the 300-pound mark and has kept his waist tight for the entirety of prep.

Last week, Big Ramy sent a warning shot to Walker — and any competitor who believes they have what it takes to steal his title. The reigning two-time Olympia winner shared a massive physique update and looks lean despite tipping the scales at a blistering 337.3-pounds.

According to Walker, if Ramy comes in shredded, he’s ‘probably’ going to win another Sandow at this year’s Olympia contest. However, he said if Ramy is off in the slightest, there are plenty of bodybuilders eager to take him down.

“Okay, well he looks really fuc**ng good.” Walker said. “He didn’t train last year that much and then he showed up at Olympia not as good as the year before. Now, it seems to me that he’s staying very consistent. If he comes in shredded, he’s probably going to win again. If he comes in even slightly off… he can be open to anyone.”

Walker believes if Ramy’s updates are recent, then he looks ‘really good.’

“His front double is really good.” Nick told Fouad Abiad. “If those are recent updates, he looks very good.”  Nick added. “There’s a video of him in like a bathroom I guess, posing… he looks really good.”

Given Ramy’s tumultuous season in the sport, perhaps this year will be the one where competitors catch him slipping. The Egyptian native missed a guest posing appearance at Jim Manion’s 2022 Pittsburgh Pro show. Eventually, Ramy apologized. However, the absence left fans questioning his passion and commitment to the sport.

Those concerns only snowballed after Ramy said his intentions are to retire from bodybuilding in 2023, before adding that this decision was made a long time ago with his children in mind. Olympia President Dan Solomon spoke to Ramy on the phone to measure his commitment to the sport. Following the call, Solomon said Ramy was fired up to win a third Sandow trophy.

In addition to Ramy, Walker will be tasked with competing against an insane lineup of talent. 2019 Olympia champion Brandon Curry is planning to add size for this year’s event. Meanwhile, consistent top Olympia finisher Hadi Choopan is determined to disrupt the Open class. Another challenger for Nick will be Hunter Labrada, who is attacking prep with a chip on his shoulder after placing one spot above Walker at last year’s Olympia in fourth.

Check out the full episode of Bro Chat below:

If Ramy’s conditioning is on point, even Walker acknowledges the reigning champion will be incredibly hard to defeat this year. After speaking with Abiad on Bro Chat, Walker emphasized that if Ramy comes in slipping, there are a number of bodybuilders who intend to capitalize at 2022 Olympia.

How To Do The Otis Up – Muscles Worked, Benefits, and Alternatives