Popular strength sports athlete Larry Wheels believes a five-day 'blast' might be more advantageous than taking a cycle throughout the entirety of prep. 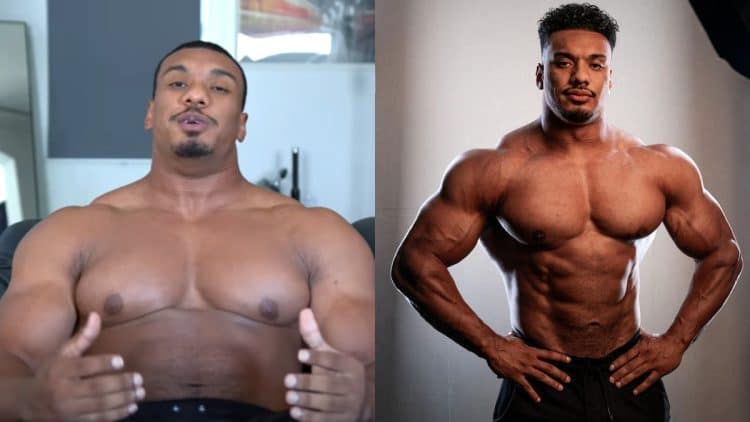 Larry Wheels is known for his feats of strength in powerlifting, arm-wrestling, bodybuilding, and strongman. Wheels recently shared a YouTube video explaining the different approach he took while using PEDs during his current strongman preparations.

A decorated strength sports athlete, Wheels has accomplished loads of success in a number of different disciplines. Last year, Wheels focused on arm-wrestling, a new endeavor that he found extremely challenging. After losing two consecutive matches to Aleksandr “Schoolboy” Toproll, Wheels returned to the sport looking for yet another challenge and found it competing against Brandon Allen. Despite winning rounds one and two, Wheels was unable to seal the deal and pick up the victory.

Wheels is a multi-faceted competitor, who has also tried his hand at bodybuilding. In 2018, Wheels took his physique to the Gold Coast Muscle Classic in California and won first place in his debut, showing that his competitive nature translates into other sports.

He last competed at the 2020 XPC Arnold and intended to compete at the Revolution Powerlifting Syndicate in 2021. However, Wheels was unable to make it to the show after a quad injury prevented him from participating.

As of late, the 27-year-old decided it was time to compete again in strongman. Wheels plans to return at the 2022 Middle East’s Strongest Man, expected to take place on Aug. 27-28, in Dubai. In addition to eying another contest, Wheels has made it clear that his plan is to keep demolishing old PRs (personal records). His commitment to his craft is evident after he completed a massive deadlift of 930-pounds (421.8-kilogram) for three reps. According to Wheels, this feat of strength was made possible by a refined cycle he’s started implementing recently.

In a YouTube video, Wheels dives into the type of cycle he utilized during prep. The strength athlete believes encouraging a healthier approach is responsible, as many fans look to him when it comes to designing their own regimen.

“In the past, typically a cycle I run, I’m not going to name the compounds specifically because I fear people watching this, not everyone but some will hear the compounds and call their drug dealer and say they want this and that. That’s what Larry took so I’m going to take it. So, to keep things more vague and trying my best to send the right message to those who are already using PEDs, not those who are natural and considering it. I’m trying to encourage a healthier approach to using PEDs for those who already do. Guys if you don’t already use PEDs please do not, you don’t need PEDs to get stronger.” Wheels explains.

Wheels usually runs a cycle for 8-12 weeks, but says this time, it was completely different. Instead of using several compounds for weeks on end, he found the most success by sticking to an increased testosterone dose this year. He clarified that he only used other compounds starting five days from his personal deadlift record.

“In the past, I’d run a cycle of several compounds. There’s a couple specifically for strength that work extremely well and most people in the strength world use it as a bread and butter. I use those compounds for usually eight to 12 weeks. So, the first two weeks are okay but each week that you’re on, you’re body is enduring more and more stress. Side effects become increasingly more unbearable, and especially the most effective ones, the most effective steroids from gaining strength unfortunately come with the most potent side effects.

Admittedly, Wheels was skeptical when his coach suggested a five day blast, but the results spoke for themselves, according to the strength sports athlete.

“When my coach told me you could reach your all-time best in five days as opposed to the usual 8-12 weeks that I would use these compounds for, you can imagine I was a bit skeptical. But I took his word for it and did the entire eight week prep, for this 422-kilogram deadlift for a triple, which meant to only be two reps by the way.

Sticking with a higher dose of TRT, Wheels was ‘blown away’ by the results. Because the blast lasted only five days, the powerlifter maintained that many of the side effects were non-existent this time around.

“Again, a bit higher dose weekly of just TRT. The final five days I used those extra compounds that are typically used for 8-12 weeks and I was blown away with how effective this was because in only five days, you’re not experiencing any side effects. You’re not getting acne, insomnia, mood swings. You’re not getting those really unbearable, annoying, and potentially life-threatening side effects with just five days of use.”

Wheels: ‘It’s Bittersweet That I’m Only Learning This Now’

Given that Wheels has been using compounds for over ten years, he’s thankful for his new regimen.

“I wish I knew I could do it this way a decade ago. It’s a bit bittersweet that I’m only learning this now ten years after the fact of hitting my PRs and still making progress and having a successful lifting journey, but doing it in a much more unhealthy way compared to how I just did it over the last couple of months.”

Wheels added that because he’s no longer running a cumbersome cycle, there is no temptation to veer off his program.

“There’s no temptation to go off program because the entire cycle, you’re not on these very potent compounds. You’re just on testosterone. You know if you just went off the program, and lifted for ego or social media, it’s not going to come out of your ass. You know it’s not going to be there because of course, you’re still going to make progress than if you were natural but being on testosterone and being on XYZ, there’s a very big difference. That temptation throughout this entire prep just wasn’t there. It was just easier to stick with the program.”

Following a rash of deaths in the bodybuilding industry, a ‘worried’ Wheels decided to get his heart checked just in case. Fortunately, his heart was deemed healthy after an Electrocardiogram (ECG).

This isn’t the first time Wheels has spoken about the harmful effects caused by PEDs. The popular athlete revealed that his life was a ‘living hell’ while using Trenbolone, a popular androgenic compound. Wheels believes educating those who use PEDs is a worthwhile cause, given the influence he has on athletes in a number of different sports.