2021 Arnold Classic winner Nick Walker's strength is climbing in the off-season as he continues building his physique for 2022 Mr. Olympia. 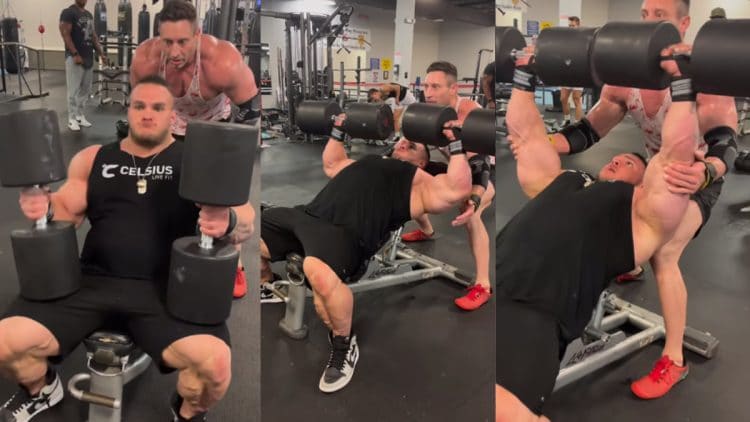 Men’s Open bodybuilder Nick Walker has been on a meteoric rise in the sport following his 2021 season. Looking to improve from last year’s Olympia showing, Nick is training with heavy weight in order to add quality muscle to his physique. Walker crushed 200 lb incline dumbbell presses for 6 reps in a recent training session.

Nick Walker has made a name for himself in the IFBB Pro League with jaw-dropping muscularity. He exploded onto the scene in 2021 with the help of his coach Matt Jansen. Walker got the attention of the bodybuilding community after an impressive win at the 2021 New York Pro. The victory resulted in Walker earning his invite to 2021 Mr. Olympia. In what became a historic rookie season, Nick stormed the stage at the 2021 Arnold Classic months later and blew away the competition as predicted.

Capping off back-to-back victories, Nick placed in fifth at his 2021 Mr. Olympia showing. Nick routinely shares physique updates and training sessions, giving fans a unique perspective on how he prefers to approach his off-season. Last week, the mass monster shared a video of him locking out 185 lb dumbbell incline presses for 10 reps. Walker made it clear that he didn’t compete at the 2022 Arnold Classic last month to focus on improving his build for his next Olympia appearance.

In a recent post made on Instagram, Nick shows off three sets of incline dumbbell presses. His first set was 160 lbs for 18 reps. Increasing by increments of 20 lbs, his next set consisted of 180 lbs for 12 reps before finishing with 6 reps of 200 lbs.

“Was feeling really good today!!!! Went heavy on incline db press 3rd set in went after the 200s for 6 reps

Then ended with some Biceps!!!!!!!” Nick Walker posted.

In addition to increasing muscle mass, one of Walker’s goals this year is to ensure that his waist stays tight while maintaining an insane V-taper. Walker’s offseason progress is going according to plan judging by some of the workouts he’s revealed on social media lately. Nick shared an extensive shoulder and triceps training session and underlined how important the routine was for building the rear delt, which he believes is one of the most neglected muscles when it comes to working out the shoulders.

The field of competitors for this year’s Mr. Olympia is overflowing with talent. Of course, Mamdouh ‘Big Ramy’ Elssbiay will be looking to capture his third straight Sandow trophy after leaving no doubt with the judges in 2020 and 2021. In addition, 2019 Mr. Olympia Brandon Curry plans to bring an undeniable package this year in hopes of toppling Big Ramy. After earning his Olympia invite by winning the 2022 Boston Pro, William Bonac intends to silence any doubt that arose from his runner-up showing at the Arnold Classic last month.

Given the talent-rich lineup of competitors who intend to make a statement, Nick isn’t leaving anything to chance as he continues off-season preparations. Walker is making the most of his time away from the stage as he eyes the podium at this year’s Mr. Olympia.