Larry Wheels continues to break records in the gym 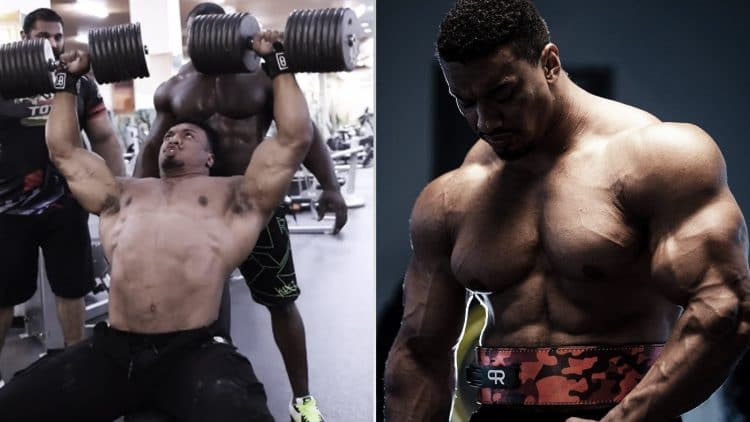 Wheels uploaded the video of this most recent heavy lift on his Instagram account. The dumbbells Larry Wheels used for this lift were labeled to be 100kg (220.4lbs). However, he weighed them on the scale and they actually turned out to be 85kg. The 26-year-old pulled off the set using wrist wraps.

Courtesy of Larry Wheels’ Instagram account, you can watch the video of his 85kg (187.3lbs) shoulder press here:

It says 100kg but I weighed it and it’s actually 85kg,” Wheels wrote in the caption.

Larry Wheels competed in the 140kg weight class in his most recent competition outings – 2020 Xtreme Powerlifting Coalition (XPC) Arnold and the 2019 Revolution Powerlifting Syndicate (RPS) InsurreXtion 8 – winning first place in both. Although he did not reveal his body weight at the time of 85kg shoulder press, the weight in each hand was nearly 60 percent of his competition body weight.

2017 WSM winner Eddie Hall holds the distinction for the current world record for the heaviest shoulder press. Hall lifted 110kg (242.5lbs) in each hand in 2020. However, both Eddie Hall and Larry Wheels have performed the lifts outside of the competition.

Larry Wheels has attempted several heavy lifts in the past couple of months. However, a noteworthy fact is that Wheels suffered a quad injury while performing barbell squats in September. He has been in a recovery phase for the majority of this time. The 26-year-old had broken the news of his injury in an Instagram post.

A few weeks back, Larry Wheels set the personal record for 17 reps of 63.5kg (140lbs) dumbbell shoulder press. Wheels did not reveal the bodyweight at the time. However, even this lift was nearly 45 percent of his body weight.

Larry Wheels’ approach is not risk-averse by any means as the 26-year-old phenom has suffered multiple injuries throughout his career. If he finds a way to curb the injuries and still push his limits, we can rest assured that the record-wrecking machine will have many offerings in terms of records for many years to come.