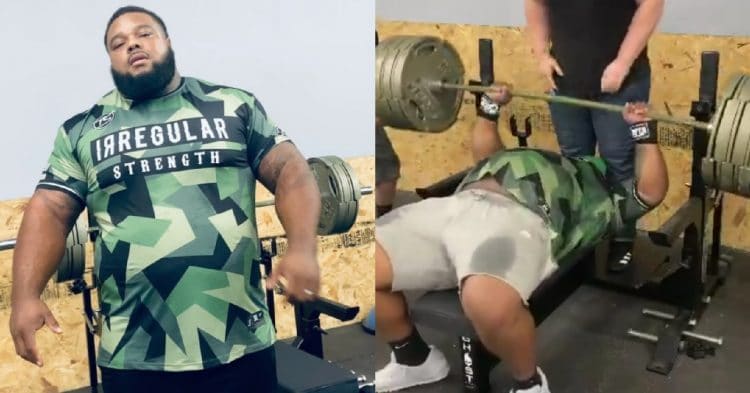 It has been a month since the disaster that was Julius Maddox attempting to hit an 800lb bench press. Now he is back in the saddle with his heaviest lift since then, but things did not go exactly as planned.

Maddox was gearing up to break his world record for the bench press, with the intent to hit 800lb in a highly publicized event. However a terrible misload would cause him to miss the world record, tweaking his back and pec in the process. This was an easily avoidable mistake, that was seemingly only made worse by the response by the meet director, as well as some issues Julius seemed to have with the promoters.

Since then, Julius Maddox has done some training, but he was taking it a little easy, doing low weight for high reps. However he took to Instagram recently to tease his heaviest training session since the misload. He shared a teaser of a 740lb bench press double, while saying he was jnhtally with this performance.

FULL VIDEO ON MY CHANNEL tomorrow @10am cst

Instability is the biggest issue I’m having at this point.. Benching on a standard pad is making it hard for me to find balance and leverage. I’ve tried to adapt but cant seem to adjust. I’ll find a way no matter what..”

Sure enough, Maddox uploaded the full video the next, to both his YouTube and Instagram. It was instantly clear to see what made his unsatisfied with the training session. Things were looking smooth on the first rep, but with the second he began to sway and lose balance with the barbell, needing to be re-racked by his three spots.

Obviously this was not the type of performance that Julius Maddox was looking for. That being said, he is just one month removed from an injury, so some slack is in order. Hopefully whatever is causing him trouble will be fixed in training, so he can eventually get the 800lb world record that should have been his.