Eddie Hall and Hafthor Björnsson have exchanged serious trash talk in the build up of their boxing match. 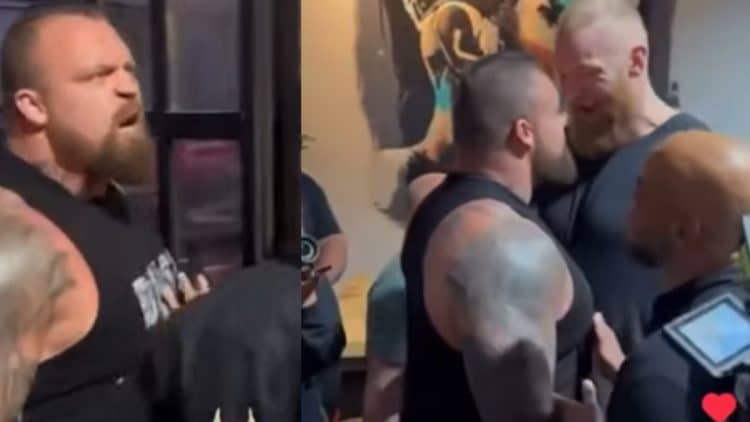 Only a few more days are left until we get to witness one of the biggest and heaviest boxing matches in history. The fight between Eddie Hall and Hafthor Björnsson will take place on March 19th, 2022, inside the Dubai Duty-Free Tennis stadium in the United Arab Emirates. With time passing by, the tension between Hall and Björnsson is becoming more visible. This was seen on March 13th, as Eddie Hall and Hafthor Björnsson had their pre-fight face-off.

Even though everyone assumed that their face-off would have some heated moments, Hall and Björnsson exceeded the expectations. It started with a normal talk between the two, but in the span of one minute, Hall and Björnsson were ready to fight. The most dramatic moment was when Eddie Hall seemed to spit on his rival while they were being separated from each other. We can now be certain that the fight will be extremely interesting, as both athletes are carrying their emotions into it.

Both men were previously crowned World’s Strongest Man, and they know what needs to be done. Eddie Hall won it in 2017, while Hafthor Björnsson won the 2018 edition. They are always used to being the best in whatever they do and are filled with self-confidence. However, only one of them will come out victorious this time.

Eddie Hall and Hafthor Björnsson were just fellow Strongman competitors until 2017. The beef between them started following a disagreement in the Finals of 2017 WSM. On event 3, which was the Viking press, one of Björnsson’s reps was disallowed due to double-dipping. Hall won the event and claimed one point more than Björnsson, which ended up being crucial in the title race.

That was just the beginning of their feud, as the most important factor was the deadlift World Record. Hall was the first man to pull 500 kg, but Björnsson broke his record, as he deadlifted only 1 kg more. However, due to Covid-19, Björnsson could not do it in competition and organized an event in Björnsson’s home gym in Reykjavik, Iceland. Björnsson’s event was sanctioned by WUS and had Magnus Ver Magnusson as the head judge. This is the reason why Hall doesn’t recognize the lift as an actual record, and Björnsson noted that.

Hafthor Björnsson decided that the only way to squash the beef was inside the boxing ring. Despite being linked to face each other in the past, the fight never came to fruition. Eddie Hall was forced to withdraw from the highly anticipated boxing match due to a bicep injury last year.

While Hall was recovering from his injury, Björnsson was getting some valuable boxing experience. He was ready for a fight and wanted to test himself. On September 18th 2021, Hafthor Björnsson had a boxing match against an arm-wrestling icon, Devon Larratt. Björnsson won via technical knockout in the first round, which definitely gave him a confidence boost. Björnsson also fought in two exhibition boxing matches against Steven Ward and Simon Vallily.

For a very long time, Hall and Björnsson were trying to come to an agreement to make the boxing match more interesting. Hall issued Hafthor a challenge that the loser would have to donate $100,000 to charity. Björnsson upped the wager by saying that both men should donate $200,000 regardless of the outcome. Hall’s reply was that both men should donate $200,000 but the loser should add another million to that. Ultimately the prize money would not be a part of their deal, as Björnsson denied the offer. However, Björnsson suggested that the loser of this match will have to get a tattoo of the winner’s name on their body, and Hall accepted the offer.

During their Strongman career, both Eddie Hall and Hafthor Björnsson weighed over 400 lbs. They have slimmed down a lot for this fight, and their current bodyweight is around 320-340 lbs. They are still huge and possess a lot of power. In addition, this is a fight for their pride, and they will put everything on the line.