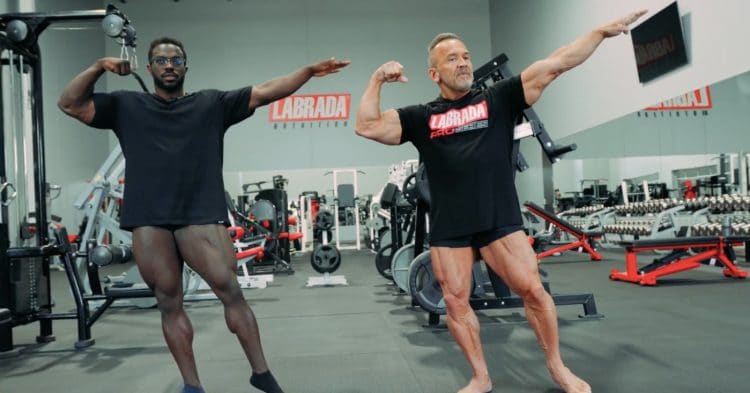 During his time in the sport, Lee Labrada was known for having some of the best posing in the game. Now he is sharing his wisdom with fans, alongside top Classic Physique competitor Terrence Ruffin.

While Labrada did not ever win a Mr. Olympia title, he came in the top 4 seven years in a row, making him a legend and mainstay in the sport. What made him so special, aside from his impressive physique, was his ability to display his muscles like no other, using his impeccable posing.

Ruffin is something of a modern day version of this, competing in the Classic Physique division, where he was the runner-up at the 2020 Olympia. As his physique develops, he continues to show an artistic level of posing that makes him a serious contender to win the title one day.

With that in mind, fans were pumped to see Lee Labrada and Terrence Ruffin come together to give a master class on the best bodybuilding posing techniques. They posted this near hour-long collab to YouTube, where they chose to impart their wisdom on current and aspiring bodybuilders alike.

To start the video, Lee complimented Terrence’s posing, and asked him what it takes to be good at posing. Ruffin’s answer was straightforward, as he explained that bodybuilders should be able to understand their body and know how to use their strengths.

“I think one, they need to understand their body, their strength and weaknesses. I notice that a lot of bodybuilders aren’t able to quite see that… I think a great poser should be able to see those things themselves,” Ruffin told Labrada.

Terrence and Lee agree that the keys are to know your body first, then learn mandatory poses. From there, a bodybuilder can master transitions and more unique poses, but without the mandatory poses they will never succeed on stage.

“Make your posing so good, that no matter when the photographer takes that picture, they can’t get a bad shot of you onstage. So whether they get you in the pose, or they get you transitioning to another pose…”

Lee Labrada and Terrence Ruffin discuss their influences for posing, with Lee pointing to Ed Corney as his own influence. Terrence points to Lee himself, as well as the likes of Kai Greene.

Something that Terrence pointed out was the correlation between art and dance, to posing. Lee returned by noting how important the hands are when it comes to posing.

“The hands are expressive. When you move between poses, your hands are open and graceful, but when you come in and then you clench, you show power. So it’s grace and power,” Labrada said.

After talking about the judges do not pay enough attention to posing, Lee discussed how important it is to match timeless music with the posing routine. He says that he often found himself piecing together a routine based on the ebb and flow of his music.

They close out the remainder of the video with Terrence Ruffin breaking down some of the poses he likes to use. On top of that, Lee Labrada went back through some of his own posing routines, breaking down the specific techniques to his poses.

“At the end of the day, the objective with posing is to show your body in it’s best light. Whether it was yesteryear or if it’s today, the whole idea is to get up there and show your body to its best angles and best light,” Lee said.

This was a really insightful, deep dive into the art of bodybuilding posing, from two of the best to ever do it.