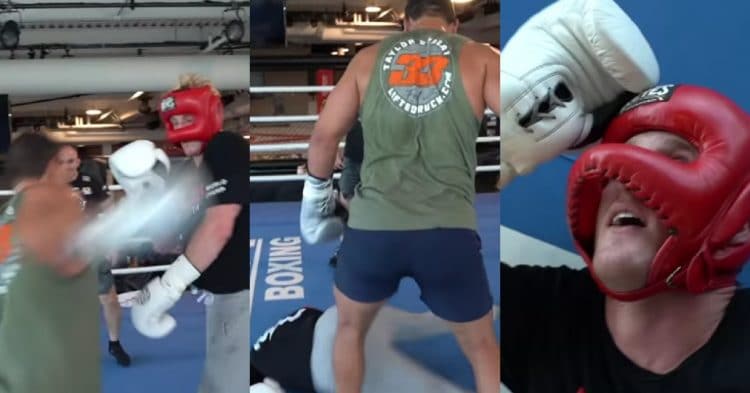 Logan Paul has decided to dabble in the world of combat sports, with a couple of boxing matches. However, he recently learned that MMA is a different kind of beast.

Paul is one of the most popular YouTube creators in the world. With 20.7 million subscribers, he has done a variety of different content over the years. From vlogging and skits to dabbling in music, he likes to keep busy.

Most recently, Paul has been trying his hands (pun intended) with boxing. He boxed a fellow YouTube star, in one amateur and one professional bout, and has a pro record of 0-1. Nevertheless, he does seem to be pretty serious about his training, and boxing.

Another combat sports endeavor that Logan Paul has talked about giving a try, is Mixed Martial Arts. However, that may have changed following a recent vlog posted to his YouTube channel. Here, he decided to spar with undefeated UFC Middleweight contender Paulo Costa. It appeared to not go very well, as the Brazilian powerhouse seems to knock Logan out.

The sparring session takes place around the 2:15 mark of the video, check it out:

Paul is in the UFC Performance Institute, in Las Vegas when he squares off against Costa. He makes a joke that the fact they only put headgear on him is a not-so-positive sign. Regardless, they start sparring, and Logan gets cracked with a big overhand right, before falling face-first to the canvas.

To be completely transparent, it is hard to tell how genuine this video is. It seems unlikely that Costa would have shown such a lack of self-control by pummeling Logan like that. Furthermore, it would not be the first time he has faked getting knocked out. Nevertheless, he was rolled over, as he came to asking how he did.

Real or not, it was still entertaining to see Logan Paul go at it with Paulo Costa. It begs the question as to whether this could mean we are closer to seeing him in the UFC.