The pallof press is an excellent functional stability exercise. 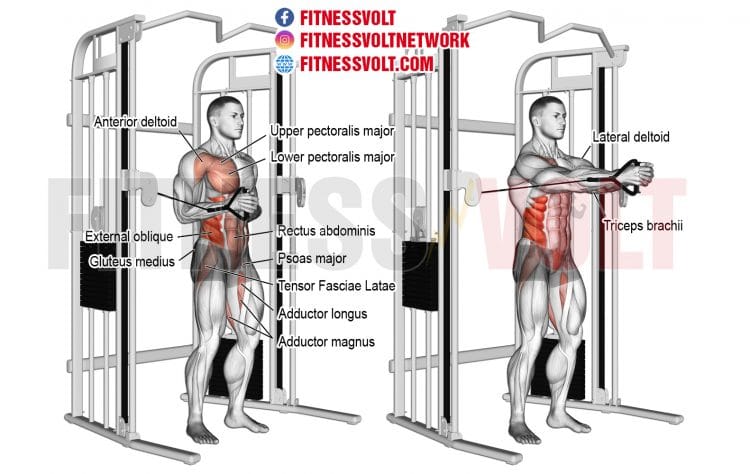 The Pallof press is a very effective anti-rotational exercise utilized to train the core, in addition to several important muscles which play a role in optimal stability and function. (1)

And it was named after physical therapist John Pallof.

But this exercise is not as commonly used as the plethora of stability movements performed in most gyms, so you may have never seen or heard of it (doesn’t mean you live under a rock).

However, that doesn’t mean you shouldn’t incorporate it into your routine every week from this point on…

So, we put together a pretty comprehensive guide detailing as much information about this exercise as we think you’ll need…

The Pallof press is an excellent movement which actually involves proper training of the general core and all of its functions. Plus, the other muscles which effectively assist.

It promotes overall stability and strength, improved posture, balance, physical performance, and the carryover to everyday movements is a big plus. (1, 2)

Plus, your back and spine will also experience the positive effects of this great exercise due to practicing proper posture, and optimal core strength is very important for preventing back pain.

But you also get the unilateral function benefits since you’re doing the movement one side at a time. And unilateral training is a must for stability, coordination, preventing muscular imbalance, and even injury improvement. (3)

So, whether you’re an athlete or someone who trains in the gym to look better and improve every aspect of your fitness; the pallof press will help you tremendously.

As the core is an essential stabilizing component in every physical activity and there’s essentially no reason not to incorporate this movement.

The Pallof press does not need to be a complicated movement but it does need to be done correctly in order to get the benefit from it. The focus is on stabilizing the core and body when there’s resistance pulling the body in one direction.

Note: You can either use a cable machine with a single grip attachment or a resistance band. The wider the stance the easier the movement will be, and a more narrow stance will increase exercise difficulty.

Step 2. Stand with either your left or right shoulder facing the base where you’ll be pulling from so that your body is perpendicular to the cable or band.

Hold the cable or band at a mid-chest level and close to your sternum but not touching.

Step 5. Bend your knees slightly and keep your chest up maintaining an upright posture with a tight core.

Use a weight that you can comfortably work against by utilizing your core. If you cannot keep the weight in front of you then you’re using too much weight.

Step 6. Depress and retract your shoulder blades, keep your elbows tucked, maintain your posture, and pull the cable or band into your lower chest slowly to activate the core before the press.

Step 7. Press the weight forward and lock out your elbows for one to two seconds while using your core to fight against the resistance that is wanting to rotate your torso toward the base.

Then, pull the weight back into your lower chest slowly.

After you’ve performed the Pallof press on one side, switch to the other and repeat.

The split stance Pallof press will no doubt allow you to have better control due to the increased balance from your body position. And it’s a great movement for improving hip stability.

The vertical Pallof press is an excellent anti-extension movement since you have to prevent your body from extending backward. And you’ll need either a double handle rope attachment for cables or single bands for each hand.

You can do this one in a lunge or half-kneeling position.

This is an excellent variation which requires you to fight against the lateral flexion which you can do in a half-kneeling or standing position. 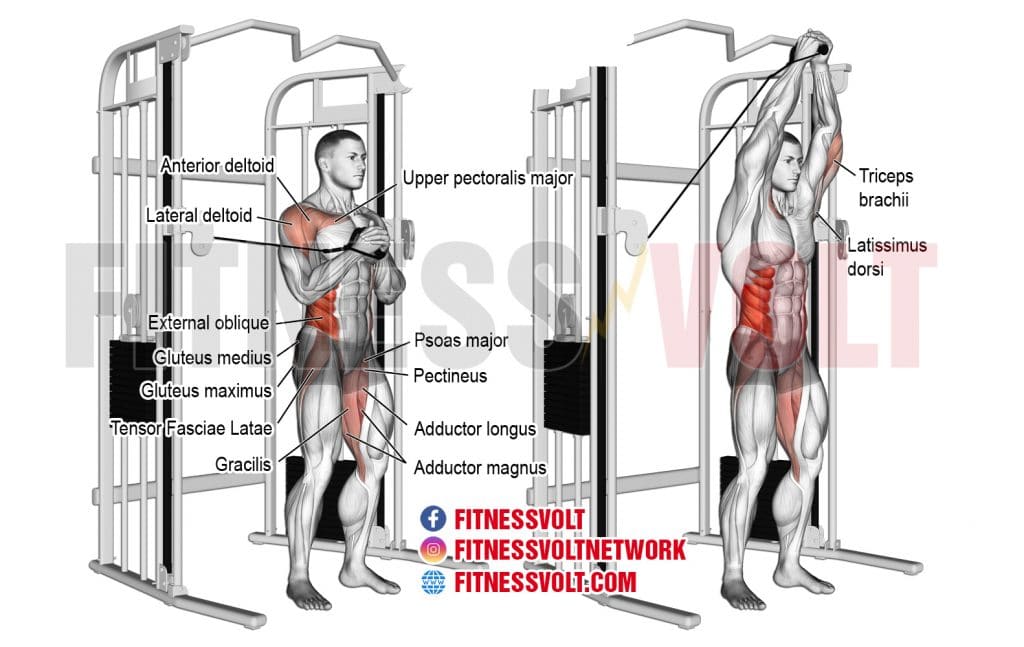 This variation is performed exactly like the standing Pallof press but you’re just kneeling down on both knees while maintaining an upright posture. And because you don’t have as much assistance from the lower body, it can be challenging to keep yourself completely stable if using more weight.

This beginner’s variation will help you to maintain better balance and stability of your core if you choose to do the Pallof press in a kneeling position.

To do this movement, simply position yourself in the bottom of a lunge with one leg in front and the other behind your body with the knees bent.

You may not have access to something solid to attach your bands. So, you can actually have someone hold one end of the resistance band while you perform the Pallof press.

It always helps to be creative when you have to be!

Since the Pallof press is a stability exercise, you can implement strategic set/rep methods to ensure you’re optimally strengthening the target muscles.

But you always want to keep the weight light to moderate because otherwise, this would defeat the purpose of the exercise as you don’t want your body to move from the original stance/position.

And higher rep training is ideal since the core is the main focus. Although, you can implement low rep ranges as long as you can handle the weight; which is also great for people who are more advanced.

Feel free to adjust and get creative with how you perform the Pallof press.

Who Should Use The Pallof Press?

If you’re capable, then you should absolutely implement the Pallof press into your training routine.

In fact, individuals young and old can do this movement since it’s so beneficial for physical health.

Building core and full body stabilization is a crucial component of being able to engage in every type of physical activity, and especially sports where you have to rely heavily on core function for bending, twisting, explosiveness, power, and strength.

And for general fitness, we need a strong core to protect the lower back and spine, in addition to supporting the heavy resistance exercises which bear down on the body’s structure.

But another very important reason why everyone should be doing the Pallof press and its variations is the postural benefits.

The Pallof press forces thoracic extension promoting a healthier posture which makes you look better; prevents dangerous pressure on the veins and arteries due to thoracic outlet syndrome; prevents muscular imbalances, and helps you to perform at your absolute best.

And if you’re recovering from an injury or just don’t have great stability and coordination; then the Pallof press is also for you.

In fact, one study showed core stability training to be more effective than typical resistance training for alleviating lower back pain. But the transverse abdominals (deep core muscles) should be the focus. (7)

How and When To Use The Pallof Press

You can do the Pallof press before training to effectively activate the core and total body muscles.

Or, you can use the movement in between training to improve core strength and stability… or, you can use it at the end of your training.

But the most important thing is that you just do it!

Eventually, you’ll become proficient with the exercise and you’ll maximally engage your core without even having to think about it.

The Pallof press is a must-have stability and development exercise which should be incorporated into your training routine/s from this point on if you’re not doing it already.

The benefits are convincing enough and when it comes to improving functional muscles like the core, lower body, and posterior chain; well, it’s non-negotiable.

We hope you found this Pallof press guide helpful, and now it’s up to you to effectively implement this exercise for your own benefit.

Training for any sport is time-consuming. Not only do you need to find time to practice the skills of your...

When it comes to strength training, most people spend the majority of their workouts focusing on the muscles they can...

The plank is a popular exercise. As well as being an excellent general abs strengthener, it also teaches you how...

Way back in 2006, a movie called 300 introduced the world to the legendary Spartans. Warriors without compare, the Spartans...