Eleven competitors will battle it out in the biggest one-day Strongman event in the world. 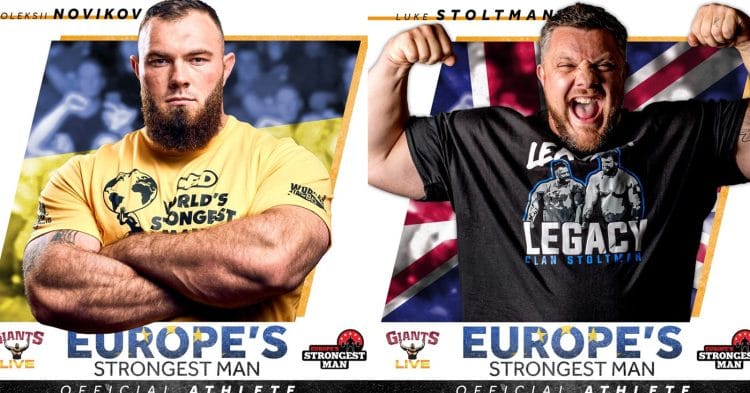 The 2022 Europe’s Strongest Man (ESM) will be held on April 2nd, 2022, at the First Direct Arena in Leeds, England. Athlete names for the competition were just released, and the stacked lineup proves why it is one of the most prestigious competitions currently. The event will be action-packed, and interesting to watch for strongman fans around the globe.

Luke Stoltman won the 2021 Europe’s Strongest Man, and he will try to keep the title for another year. However, he will have to fight hard, as the lineup is filled with World-class athletes.

Luke Stoltman is in very good shape currently, and it all started with a win in Europe’s Strongest Man 2021. He also had a brilliant performance in the 2021 WSM and won the 2021 Giants Live World Open. Luke excels at the overhead press events, especially the log lift, and he is definitely a frontrunner for the win this year.

Mateusz has competed in two tournaments since returning from a tricep injury. He placed second in the WUS Dubai and fourth in the Rogue Invitational in 2021. Mateusz is renowned for his pressing strength and speed in several medley events.

Mateusz had a third-place finish in the 2018 Europe’s Strongest Man and came second in the 2019 edition. The only accomplishment that is left for him is to win the competition.

Aivars is a 4x WSM competitor, with his best placing being 8th at the 2020 WSM. Aivars also competes in the Strongman Champions League (SCL). At the 2021 SCL, he grabbed a second place finish, just behind Kelvin De Ruiter.

Novikov is a 2020 World’s Strongest Man, but he failed to qualify for the 2021 WSM finals, after which he started dominating every competition in which he took part. He won the WUS Bahrain, WUS Dubai and the Giants Live Strongman Classic.

Oleksii came second in the 2021 Europe’s Strongest Man, and without a doubt will put up an impressive performance this year as well.

Luke Richardson only competed once in this competition, which was in 2020. Luke surprised many people and won it, claiming the title of Europe’s Strongest Man. We will see if he can repeat that impressive feat of strength.

Graham Hicks is a very experienced strongman, having claimed a 3rd place finish in both the 2014 and 2021 Europe’s Strongest Man. However, he is dealing with a groin injury which forced him to withdraw from Britain’s Strongest Man. Hopefully, he can recover correctly and perform as he usually does.

Melsted has not competed a lot throughout his career but took part in two WSM competitions. He will represent Iceland, which is a country with the most wins in the ESM, as Icelandic representatives have won it eight times.

At 26-years-old Pavlo is relatively young for the sport of strongman, and this will be his biggest competition yet. He is also 2020 Ukraine’s Strongest Man.

The 2022 Arnold Strongman Classic is scheduled to happen just a month before the 2022 ESM, and a few of these athletes will compete in both. It will be fun to see how they fare with that, but chances are that they will be even more prepared.