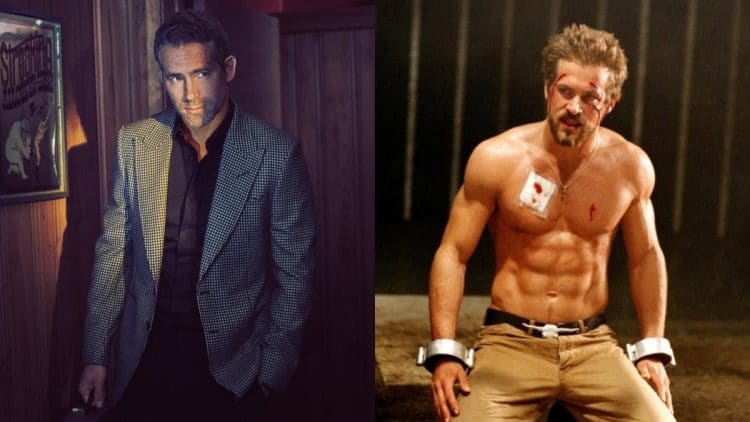 Show me a man in his mid-40s who can execute a perfect standing backflip and I’ll show you a guy who’s got it together physically. Throw in a lean, muscular body with a waistline that guys in their 20’s would kill for, and you’ve got a man worthy of imitation.

That man is Ryan Reynolds and, while he might not be packing the beef of a Chris Hemsworth or Dwayne Johnson when it comes to role modeling the lean, athletic muscular look that the majority of middle-aged guys aspire to, Ryan is your guy.

Ryan’s been a feature on the big screen for three decades, Over that time, he’s transformed his body to suit his roles, packing on mass for superhero roles in Green Lantern and Deadpool and leaning up for romantic leading roles such as The Proposal.

Trivia: Ryan has a fear of flying which dates back to a time when his parachute didn’t open on the first attempt.

Ryan Rodney Reynolds is a native of Vancouver, Canada, the son of a Royal Canadian Mounted Police (RCMP) officer. Two of Ryan’s brothers have followed their dad into law enforcement careers in Canada.

Ryan’s acting career began at age 13 with a role in the Canadian soap opera Hillside. Two years later he made his film debut in Ordinary Magic. He had recurring roles in a number of TV series over the next four years but quit acting at the age of 19 after having become discouraged with the industry.

Ryan enrolled at Kwantlen Polytechnic University but was soon convinced by an acting friend to relocate to Los Angles and make another shot for stardom. Up until 2004, he acted mainly in comedies. But then he landed the role of Hannibal King in Blade: Trinity. To take on the role, Ryan began on an intense training program that saw him pack a dozen pounds of lean muscle to his physique.

Reynold’s star continued to rise throughout the mid to late 2000s, with starring roles in such moves as Smokin’ Aces, X: Men, X: Men Origins: Wolverine, and The Proposal. In 2012, he got in the best shape of his life to play the Green Lantern. He even surpassed that condition in 2016’s Deadpool. The movie was a great hit and a sequel was quickly greenlit.

Ryan upped his game once more to achieve peak shape for Deadpool 2 in 2017. 2021 was a big year for Ryan Reynolds movies with 3 of them hitting the screen; The Hitman’s Bodyguard, Free Guy and Red Notice.

In October of 2021, Ryan announced that he was taken a ‘sabbatical’ from acting.

Ryan has been linked to a string of female celebrities. In 2008 he married Scarlett Johannsen but the marriage only lasted a couple of years. In 2012, Ryan married Blake Lively, who had first met on the set of Green Lantern. The couple has three daughters, born in 2014, 2016, and 2019. The Reynolds-Lively family lives in Pound Ridge, New York.

Trivia: Ryan had a relationship with, and even got engaged to, singer Alanis Morisette. After they broke up, she wrote a song about him called ‘Torch’.

Ryan has been working with celebrity trainer Don Saladino ever since he began working on his prep for the first X: Men movie. Saladino was in the process of getting High Jackman into Wolverine shape at the time. Over the past dozen years, Ryan has followed Don’s guidance in both his training and nutrition practices.

Saladino is a big believer in being in shirtless shape all year round. Any actor that he works with needs to be two weeks away from having a screen-ready physique at any given time. That means that they have to always be in point with their nutrition.

Neither Ryan nor Saladino believes in going to extremes with nutrition. You won’t find Ryan cutting out any of the macros, especially not carbs, when he’s working to get as lean as possible.

Interestingly, when the two first worked together on Green Lantern, Saladino did have Ryan going pretty low on carbs. But this resulted in low energy levels that didn’t allow Reynolds to bring the type of intensity to his training that his trainer was after. It was only after they upped the carb count that Ryan’s energy levels peaked. From that point on his training – and his results – took off.

Saladino has Ryan eating plenty of sweet potatoes, oatmeal, brown rice, and fruit. He follows a typical bodybuilding eating plan with meals every three waking hours, starting at 7 am and going through to 7 pm.

Ryan is a food lover who enjoys prepping his own meals. Here is a typical breakdown of a day’s eating, Ryan Reynolds style:

Ryan may have a piece of fruit or some non-fat yogurt after his dinner. However, he makes it a policy not to eat after 8 pm.

Ryan is also big on staying hydrated. He typically drinks half a gallon per day, carrying a water bottle with him and regularly sipping from it.

Ryan avoids junk foods but does allow himself to have a cheat meal (note, not a cheat day!), once per week. This usually happens midday on Sunday.

Ryan’s workouts happen between his first and second meals. After his breakfast, he will allow at least an hour before heading to the gym for the food to be properly digested before lifting weights.

When it comes to packing on muscle mass for a role, Ryan doesn’t drastically change the foods that he eats. Rather than going all-in on weight gaining supplements, he’ll simply eat more of the whole foods that he relies on all year long. His daily caloric intake will typically go up to 3200 over the course of a 6-month muscle gain training program for a new role.

Ryan takes supplements both as part of his everyday health regime and specifically to support his gym work. For overall health he takes the following:

Ryan’s workout supplementation is pretty basic. He doesn’t take a pre-workout, relying on the oats and fruit in his breakfast meal to fuel his muscles with glycogen. He does take 5 grams of creatine every day, including the weekends to refuel his ATP emergy system during training.

Next: Find Your Daily Protein Intake

When Ryan first began seriously working out, his focus was n packing on muscle mass. As a result, he followed a standard bodybuilding split routine. It worked wonders, allowing him to pack on 25 pounds of pure fat-free mass for Blade: Trinity.

Now that he’s in his mid-40’s Ryan has switched his focus to more functional training. In an interview with Men’s Health Magazine back in 2016, he said …

It’s easy to get aesthetically fit – well, not easy, but you’re not necessarily in great shape. You look like an Olympian, but you can’t perform like one.

Since that time, Ryan’s workouts have been centered around the functional training area of the gym.

To provide you with the fullest picture of what it took for Ryan to achieve his current physique, I’ll provide samples of what Ryan’s training looked like during his mass building Blade: Trinity days and how he trains today.

Between 2004 and 2015, Ryan followed a standard bodybuilding type program. He’d train 4 days per week as a matter of course and then step it up to 7 days per week as he zeroed in on a movie role.

From 2016 until now, Ryan’s been focusing on functional training 3-4 times per week.

For the core exercises, Ryan would keep his between set rest down to 30 seconds. On the chest exercises, he would extend that rest to 60 seconds to provide for muscle recovery.

Ryan’s activity level on the weekends would differ whether he was bulking for a role or training in general. During his muscle gain training periods, he would restrict his weekend activity to preserve energy and calories for muscle gain. At other times, though he would carry out active recovery forms of movement such as hiking in the woods, playing pick-up games of football and basketball, and playing with his kids.

Ryan performs 3 functional fitness training workouts per week on alternate days. These are typically done on Monday Wednesday and Friday. The workouts aren’t as long as the bodybuilding workouts he used to do, but they are a lot more intense.

On two other days, usually on Tuesdays and Thursdays, Ryan will perform high intensity interval training (HIIT) workouts to maximize fat burn and ramp up his cardiovascular fitness.

This workout incorporates superset training. Ryan’s first superset pairs the kettlebell front squat with the kettlebell swing. He moved directly from one exercise to the next with no rest. Then he allowed himself exactly 60 seconds rest before doing the next superset.

With the 5 battle ropes sets, Ryan moves between alternate waves, power slams, and squat to shoulder press. There are another two supersets in this workout; floor press + clap push-ups and barbell front squats + sled push. He used the same rest protocol as in the first workout.

Ryan alternates between the treadmill and the rowing machine for his HIIT workouts. After a 2 minute warm-up, he performs 8 rotations of 20-second sprints and 10-second rests. He then finishes with a 2-minute warm-down.

Ryan Reynolds is a great example of a man who has adjusted his training with age and circumstance. He’s no longer going for those bulky superhero roles that he did a dozen years ago so does not need to play the size game. Being a man approaching 50, he’s wisely putting more emphasis on functional fitness, and cardiovascular endurance while also maintaining a lean, muscular body to be envious of.

Concentration Curl: How To, Muscles Worked, and Variations