Malik already held this record, but he broke through the 200-kilogram (440.9-pound) milestone. 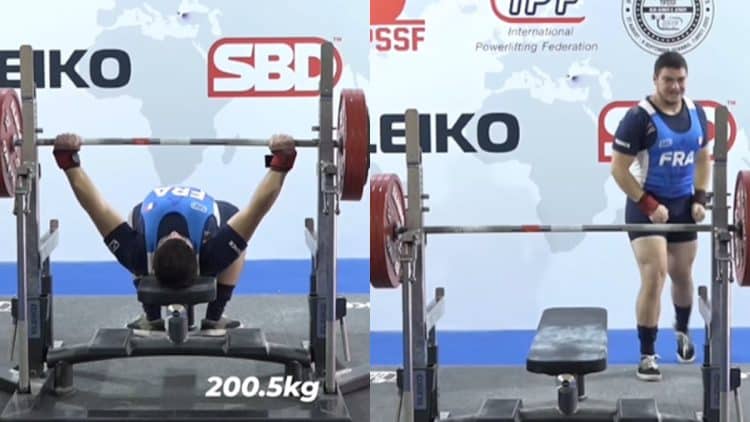 The 2022 IPF World Sub-Junior and Junior Powerlifting Championships left us in awe multiple times, like when Agata Sitko added another World Record to her resume. However, amongst all of the actions that took place in Istanbul, Turkey, between August 27th and September 04th, Malik Bernoussi Triolet’s performance was arguably the most surprising. Although Malik is only 18-years-old, his strength is comparable to that of much more experienced elite powerlifters. This can especially be said for his bench press, as he broke the IPF Sub-Junior World Record in the 93-kilogram weight class.

Malik Bernoussi Triolet locked out a massive 200.5-kilogram (442-pound) raw bench press. He also previously held the record of 193 kilograms (425.5 pounds), which he set at the 2021 EPF European Classic Powerlifting Championships. So, Malik’s recent improvement means that he is the first powerlifter in the 93KG Sub-Junior division of the IPF to bench press at least 200 kilograms (440.9 pounds).

Check out the bench press here:

Malik Bernoussi Triolet was the best-ranked male powerlifter in the Raw Sub-Junior division across all weight classes at the 2022 IPF World Sub-Junior and Junior Powerlifting Championships. Furthermore, he scored competition PRs in all events, so this is easily his greatest performance yet.

Despite his young age, Malik Bernoussi Triolet has already competed in 12 sanctioned powerlifting competitions. However, this was his just fourth win so far, but also the most significant one. Now that he has earned the title of World Champion, Malik will be hungry for more. So there is no doubt that many more victories will come soon enough.

The French powerlifting scene is not lacking elite powerlifters, but Malik Bernoussi Triolet has the potential to become their best international representative in the next few years. Considering Malik is only 18-years-old, his strength is likely to increase once he enters his 20s, which will be fascinating to watch.