"The Persian Wolf" continues to add strength as preparations heat up for 2022 Mr. Olympia. 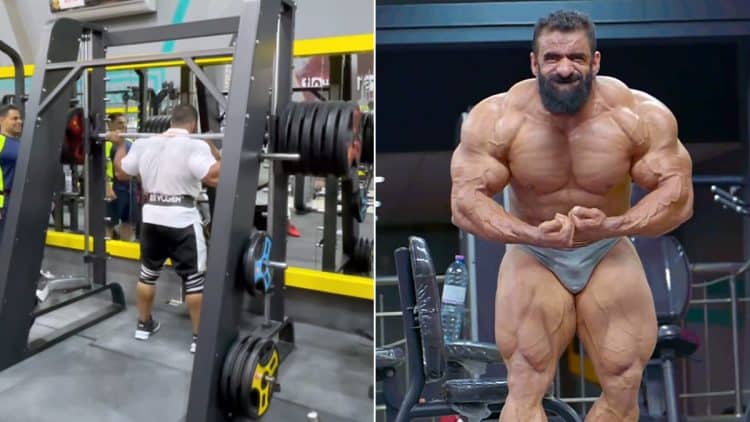 Hadi Choopan has developed a reputation for being one of the most consistent Men’s Open bodybuilders in the IFBB Pro League. In a recent post made on Instagram, Choopan showed off insane lower body strength with Smith machine squats for reps.

There are less than 15 weeks until 2022 Mr. Olympia, and Hadi Choopan intends to earn his first Sandow trophy with elite-level conditioning. Throughout his career, he has never placed outside the top five at Mr. Olympia contests. In 2019, Choopan made his debut on the Olympia stage in third place. While he brought an impressive package to 2020 Olympia, he ultimately finished the show in fourth.

The Men’s Open lineup expected to compete at 2022 Olympia is overflowing with talent. In addition to the top five from last year’s contest, Hadi will be pushed on stage by a number of promising competitors like William Bonac, Andrew Jacked, Blessing Awodibu, and the newly signed NPC threat, Michal Krizo, assuming he qualifies for the show in the coming months.

In June, Choopan showed off a stellar off-season physique update. Compared to years prior, it appears Hadi is on a mission to bring a bigger and improved package to the Olympia stage.

Many in the community have voiced how dangerous they think Choopan will be this year. Seven-time Mr. Olympia Phil Heath believes Hadi Choopan has the best chance at dethroning Ramy when they inevitably meet again on stage. He added that if Ramy ‘leaves the door open’ as he did in 2021, Choopan or former Mr. Olympia Brandon Curry both have the tools to claim victory. Judging by his latest training session, this year’s bodybuilding season is heating up for Choopan.

“Put your foot on the brake gas, so press the gas with full power, it’s over 😂” Hadi Choopan wrote.

Earlier this year, Choopan was under scrutiny after his former managers (brothers Hadi and Mahdi Parsafar) said that he was using site enhancement oils like Synthol to make his muscles appear bigger and fuller. Their falling out was allegedly caused by the brothers selling products under Hadi Choopan’s name without consent.

The conflict escalated after Choopan got Mahdi’s YouTube channel flagged for copyright violations, which led to the channel being taken down. In spite of all the drama, Choopan is laser-focused on winning his first Olympia title.

Last month, 2021 Arnold Classic winner Nick Walker named Choopan as a bigger threat than Derek Lunsford. Lunsford, who is also coached by Hany Rambod, is qualified to compete in the 212 division at Olympia. However, speculation is growing that he may receive a special invitation to compete in the Open class later this year.

Choopan’s conditioning and muscle maturity are some of his best assets for combatting the size of other top competitors. The 2022 Olympia contest is in less than 15 weeks, and Choopan’s prep is ramping up judging by how much weight he’s training with.