Martin Fitzwater is calling out Jacked after the bodybuilder shared that Visa issues may prevent him from competing at the upcoming Arnold Classic UK contest. 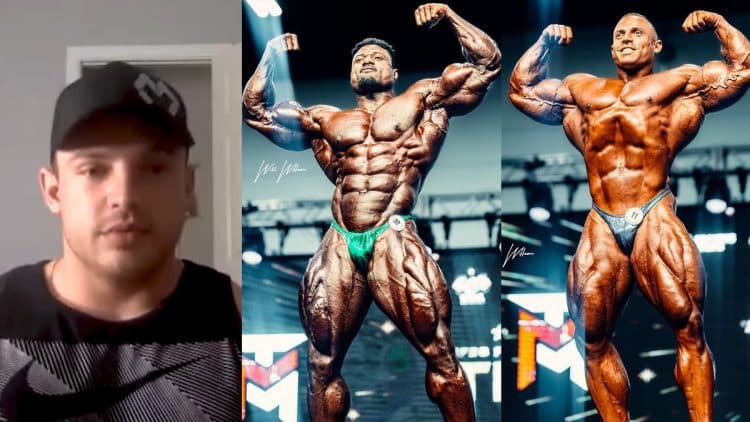 Martin Fitzwater is seeking redemption after placing second to Andrew Jacked at the 2022 Texas Pro show last month. In a recent video shared by Desktop Bodybuilding, Fitzwater fired shots at Andrew and believes he’s planning to ‘bi*** out’ from competing at the upcoming Arnold Classic UK contest.

Last month, the Texas Pro show delivered as a number of competitors pushed each other on stage. While many thought Steve Kuclo would be an overwhelming favorite to win the show, the veteran was outmatched by a pair of up-and-coming bodybuilders in Martin Fitzwater, who took runner-up, and champion Andrew Jacked.

While Andrew earned a perfect score on the judge’s scorecards in his first pro contest, many believe the show was much closer, including Martin Fitzwater, who brought some of the best conditioning of his career. Despite animosity between the top finishers, Andrew rejected that a rivalry existed with Fitzwater and said the beef was created by the media.

All signs pointed to Jacked and Fitzwater rematching next month, though it appears that is now in jeopardy. Following a recent interview with Jacked, Fitzwater isn’t holding his breath for a rematch — and fired some shots at one of the sport’s fastest rising stars.

Martin Fitzwater on Andrew Jacked Competing at 2022 Arnold UK: ‘He Ain’t Showing Up’

In the latest episode of Bodybuilding University, Martin Fitzwater discussed his contentious rivalry with Andrew Jacked.

“He can say whatever he wants. I’ll let the rest of the other people talk for me — I don’t need to say anything. But I am disappointed because he’s going to bi*** out from the Arnold UK, from the way that interview sounded. He ain’t going to show up, I can promise you that,” says Martin Fitzwater.

According to Fitzwater, without Andrew Jacked, the Arnold Classic UK contest will be decided between himself and mass monster James Hollingshead.

“I’m just going to call it how it is. It’s going to be me and James [Hollingshead] since he can’t show up and Marc Hector. I guess we’ll get a shot at him at Olympia since he’s going to bi*** out,” Martin Fitzwater added.

The animosity on Martin’s side comes from Andrew saying that he wasn’t at 100 percent for the Texas Pro show.

“If you’re going to stand on the Texas Pro stage and talk shit — and tell everybody that you weren’t even getting ready for this show and the show you’re getting ready for… you don’t even have a fuc**ng Visa for, quit talking shit,” Fitzwater said.

Bodybuilding legend Jay Cutler said that Jacked only competed in Texas because his coach, Flex Wheeler wanted to see him perform in North America before taking an improved package to the UK. Additionally, Cutler had high praise for Jacked and mentioned that his back reminded him of reigning Mr. Olympia Big Ramy‘s.

Cutler wasn’t the only notable bodybuilder impressed with Jacked’s Texas Pro victory. Former Mr. Olympia Samir Bannout believes Andrew has the potential to make the first call-out and place in the top four at the prestigious contest this December.

Meanwhile, respected bodybuilding coach Milos Sarcev shared a similar opinion. He believes Jacked will be an ‘immediate threat’ to the Men’s Open title at Olympia as long as he improves his back.

As of this writing, it’s unclear if Jacked will be able to compete at the 2022 Arnold Classic UK contest. Fitzwater, who was planning redemption against one of the IFBB’s hottest rookies, might have to wait until Olympia, assuming he is able to qualify for the show by November 20th.