A man in Australia has been arrested following an "accident" after slamming a 20kg/44lb weight on a gym-goer's head. 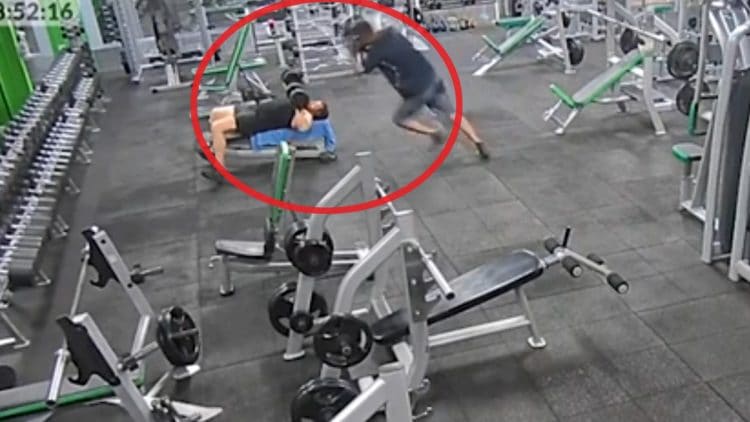 Gym accidents and hostile interactions often go viral on social media. One such instance occurred 18 months ago and was caught on camera when a man slammed a 20 kg (44lb) plate on another gym-goer’s head.

The man involved in the gym attack has been arrested and jailed. CCTV footage of the incident has circulated, and the man’s identity has been revealed. On the day of his trial, Shane William Ryan, 33, pleaded guilty in the Supreme Court. The incident occurred at the Next Level Gym in the Palmerston suburb of Rosebery southeast of Darwin, Australia.

During the video, the gym appears to be empty, with one man minding his business while in the middle of a dumbbell bench press exercise. Leading up to the attack, the man casually walks through the gym towards the victim, which is perfectly captured on video, before appearing to stumble, whilst dropping a 44lb plate on the gym-goer’s face.

The CCTV footage shows the culprit lunging towards the victim, and the man lying on the bench falls down after being attacked. In what might have been an effort to mask his actions, the attacker drops to the floor suggesting that he might have injured his ankle while the victim is holding his face in pain.

After being attacked by Shane Ryan, the victim began bleeding immediately and was diagnosed with a fractured skull. The viral video was shared by a Reddit user, and viewer discretion is advised.

“Does this look like an accident to you?” ex_legionnaire posted.

Does this looks like an accident to you? 20kg/44lbs onto his face from CrazyFuckingVideos

Read also: Woman in Mexico Gym Crushed to Death by Barbell After Trying to Squat 400lbs

During the video, Shane returns to the man he attacked seconds later and presumably helps him call the ambulance. In addition to the fractured skull, the victim also suffered a cut to his eyebrow, swelling to his face, as well as significant and ongoing psychological impacts from the incident.

Justice John Burns presiding over the court proceedings indicated that the act was extremely dangerous. While no motive for the crime has been revealed, Ryan stresses that it was an accident but accepted the court’s decision that his actions were deliberate.

‘The victim was vulnerable as he was lying on his back and had weights in his hands, he was unable to protect himself — he also had no reason to believe that you would attack him as you did,’ Burns told Ryan in court.

‘The lack of an obvious motive for you to have engaged in this offence is troubling,’ he said.

‘Where there is obvious motive for an offence it is often possible to assess the likelihood of the offender reoffending.

‘That is simply not possible in circumstances where there is no obvious motive and you have chosen not to shed any light on that issue.’ Judge Burns said.

Related: Teenager Gets Kicked While Deadlifting

Since he was charged with the crime in October of 2020, Ryan will be released from jail in May after serving a 19-month sentence. As of this writing, Ryan has yet to provide the courts or the victim with a motive for his unprovoked gym attack.