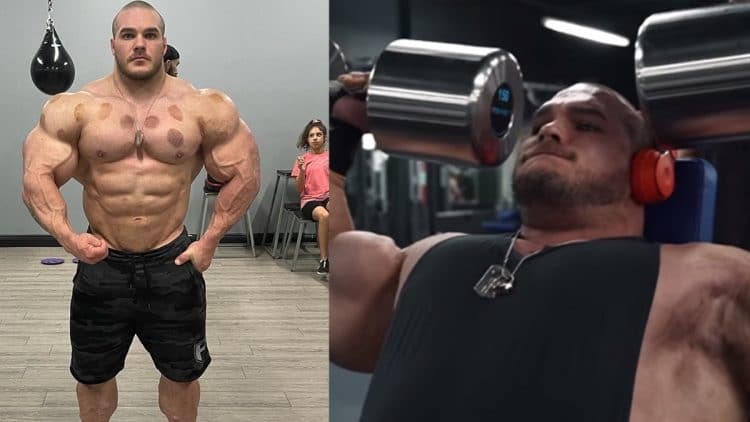 After taking the 2022 Arnold Classic off to focus on improving his physique for 2022 Mr. Olympia in Dec., Nick Walker has been consistently pushing himself in the gym. In a recent Instagram video, Walker trains shoulder presses for 13 reps with 150lb dumbbells.

Following an explosive 2021 season in the sport, Walker emerged as one of bodybuilding’s biggest stars after he dominated the New York Pro. Then “The Mutant” leveraged that momentum to secure first place at the 2021 Arnold Classic. Nick capped off his monumental rookie year by competing at the 2021 Mr. Olympia where he managed to place in fifth in the Men’s Open division. While he was unable to make it to the podium in his first Mr. O appearance, the young bodybuilder has vowed to win the show one day.

Walker has admitted that he planned to bypass the Arnold this year to focus on improving his physique for Olympia. He has been training non-stop during the offseason and has been taking advantage of plenty of different workouts. Despite Nick’s preference for working with machines, he also utilizes free weights when he’s looking to cultivate mass. Last week Nick practiced 315lb stiff leg deadlifts and is always trying to stay one step ahead of his fitness schedule and diet.

Nick Walker shared a dumbbell workout on his Instagram page where he muscles through 13 reps of 150lbs with little resistance.

Last month, news spread around that Matt Jansen and Nick Walker were no longer working together. Jansen was a pivotal ingredient to the success Walker enjoyed in 2021. He helped lead Walker to victory at the 2021 New York Pro as well as his Arnold Classic victory. Following Nick’s fifth-place appearance at Olympia, the two split up months later. Matt Jansen explained that the split was amicable and only wishes the best for his former pupil.

With 2022 Mr. Olympia abound, Nick is now putting in work with Dom Supersliced AKA Dominick Mutascio in preparation for the biggest show of the year. Nick has been hovering around the 294-296lbs range and predicts that he will bring a mind-blowing package when he graces the stage later this year.

Leaving nothing up to chance, Nick continues his offseason push with a variety of taxing workouts. As of late, the 2021 Arnold Classic champion got a stellar pump in after pushing the limits on the leg press machine. Nick featured his workout routine on a recent YouTube video and often gives fans a sneak peek of what he’s been working on in training.

“I don’t know if I’m going to free squat. I’ll see how that feels. Last time I free squatted, my back jolted a little bit so sometimes the risk is not always worth the reward but we’ll see. We’re going to start doing a little stiff leg, which is hold some weight, really stretch out the hamstrings. I found doing that for me, takes off the pressure of any knee pain that I have.

So the first thing we decided we are going to do for the quad is the leg press. I like to start with these rather than a squat. These don’t really fuck with my knees too bad. Everything gets more warmed up versus if I was going into some type of squat position, one plate would hurt my knees and it would take me like an hour to warm up. This is more of an easier way to warm up, which will make squatting, which will probably be the next exercise, a lot easier.” Nick Walker explained.

Below is machine leg workouts:

Despite his young age, Walker maintains a disciplined training regimen and diet, which have factored into why he’s found success so early in his developing career. If Walker continues prep with the same gumption he’s shown thus far, “The Mutant” will be a giant threat to the title when it’s time to storm the Mr. Olympia stage later this year.