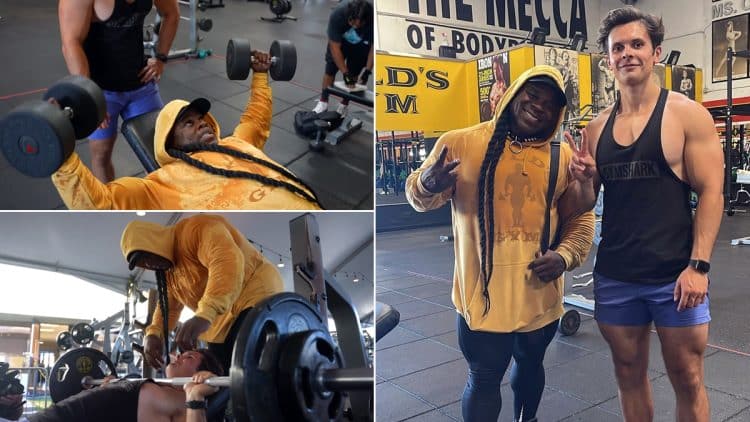 Legendary bodybuilder Kai Greene recently partnered with Will Tennyson for a chest workout. Greene is considered among the greatest bodybuilders that never won the Mr. Olympia title. He is a six-time Mr. Olympia participant, scoring top-five finishes on five occasions, including two runner-up finishes. During his pro bodybuilding career, the 46-year-old won many pro shows, including three Arnold Classic wins. Although he has not competed professionally since winning the 2016 Arnold Classic Brazil, Greene has not officially retired from the sport.

Greene is known for his tumultuous rivalry with Phil Heath. Although Greene made every effort possible, he could not dethrone Heath. Greene last competed at the Olympia in 2014. However, five years after his last show, Greene continues to maintain a massive physique and trains regularly.

The three-time Arnold Classic winner is an active social media personality and recently partnered with Tennyson for a chest workout. Tennyson is a Canadian Fitness influencer with close to 1.5 million YouTube subscribers. He routinely collaborates with professional athletes for training and interactions. In recent weeks, he joined seven-time Mr. Olympia winner Phil Heath for a brutal arms workout and a posing session. Tennyson has also trained with Stefi Cohen — a multi-faceted athlete that has tried her hand at bodybuilding, powerlifting CrossFit, and boxing.

Greene and Tennyson annihilated their high-volume chest workout at the mecca of bodybuilding, Gold’s Gym, Venice Beach, CA. The video of this session was uploaded on Tennyson’s YouTube channel.

Kai Greene and Will Tennyson hit a chest workout

Longer rep tempos, added resistance, reps, and advanced training principles are a few ways to apply the progressive overload principle in your workouts. Gradually increasing the resistance can result in hypertrophy and strength gain. In this method, the weights get heavier with each consecutive set while the number of reps reduces. Greene applied this principle for every exercise in his chest workout with Tennyson.

Greene and Tennyson started the workout with this superset to warm up the muscles and prepare the body for their intense high-volume workout. Greene started with a set of dips and moved on to pull-ups.

“There’s something really awesome that’s happening here (when you do pull-ups). We’ve got a lot of movement of the scapula… When the scapula moves, guess what? We’re talking about the activation of none other than your lats.”

While explaining the technique, Greene gave Tennyson a mantra and said:

Awestruck by Greene’s insane energy, Tennyson followed the bodybuilder as he went on to show the next chest exercise.

The duo took to the incline dumbbell fly as the first weight training exercise of the day. This movement targets the upper pectoral muscles and is an effective way to develop the chest. While the triceps act as the stabilizing muscle during the incline dumbbell fly, the shoulders are the other supporting muscles that get activated. The duo did the first set of 20 reps with 40-pound dumbbells. A little overwhelmed by the high volume, Tennyson said:

Taking a weight jump for the next set, they reduced the volume and performed 10 reps with 50-pound dumbbells. They moved on to the next exercise after two more sets of 12 and 10 reps with 60-pound and 70-pound dumbbells, respectively. Tennyson noticed that Greene took very little rest between sets and asked Greene the reason for the same.

“I think it’s Conan the Barbarian that said, There is enough time to rest in the grave,” Greene replied with his trademark swagger.

Greene next took to the incline bench press and Tennyson followed suit. The duo performed three sets of this movement to activate the sternal head of the pectoralis major muscles and took to the next exercise.

Greene and Tennyson jumped into the guillotine press to work the chest further. The standard barbell bench press is one of the most basic chest-building exercises. The guillotine press is an advanced variation that allows the chest muscles to move through a greater range of motion and gives a better stretch at the bottom of each rep. To perform the guillotine press, the person has to lower the bar to their Adam’s apple instead of the mid-chest.

Greene performed all sets of guillotine presses with incrementally heavy weights and did the top set with 225 pounds. However, Tennyson took a more cautious approach and did not ego lift to impress Kai, wrapping up the exercise by lifting 135 pounds for the top set.

Many people view the cable crossover as another exercise performed at the end of a chest workout to get a good pump. However, an ACE-sponsored study led by Wisconsin University researchers found that this isolation movement is the third most effective in activating the pectoralis major behind the bench press and pec deck fly. The duo wrapped up the training session with three sets of this isolation movement using 44 pounds on each side on a selectorized machine.

Although there were speculations of him potentially downsizing, Greene continues to train hard and stay in shape, leaving the door open for a potential comeback. Jake Wood, Olympia owner, confirmed that the Masters Olympia will return in 2023. However, the dates or venue have not been confirmed by the Olympia management. Assuming the show makes a comeback, Kai Greene will be an excellent addition to its roster. In light of Jay Cutler’s recent physique transformation, many speculated he might return to the Masters Olympia. However, Mr. Cutler has put an end to those rumors.

You can watch the entire workout video below, courtesy of Will Tennyson’s YouTube channel: