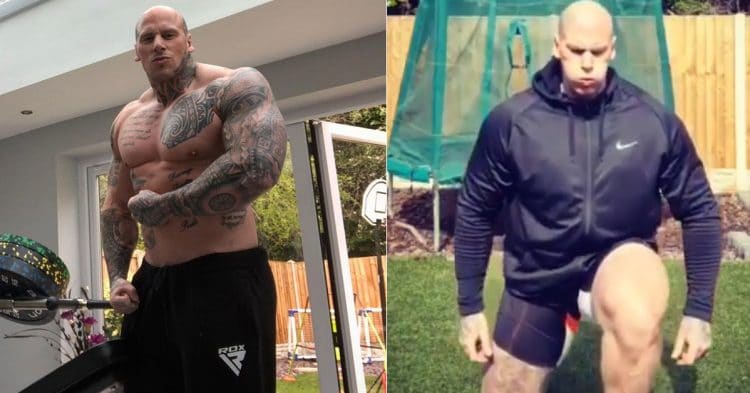 Bodybuilder, actor, and trainer Martyn Ford who’s known for being a towering 6’8,” recently posted a bodyweight leg workout on Instagram that actually looked pretty interesting. Due to current events, so many people have revealed their minimalist (and some not so much) routines.

And it’s truly a great thing as the more ideas, the better. With enough ideas, research, and creativity, most of us can maintain and even possibly continue to build our physiques. It may not be as easy for everyone who requires special equipment but we can only do our best at this point.

Well, Ford offered many great variations that showed how to optimally use time under tension, isometric holds, plyometrics, and different speeds to increase the intensity and make the exercises more challenging. Now, of course, you can use weights, bands, and utilize your surroundings for even more of a challenge.

But when you have limited or no equipment, bodyweight exercises will do just fine!

“Lower body smash!!!! No weight, no problem!!!! You can vary speeds, holds, supersets and plyometrics to absolutely destroy the legs, the environment may be different but the intensity should never differ!!!“

Check out the workout clips below… Note: Scroll through the posts for each workout video as he posted several clips.

“Time to get some power walking in, and weighted up the @rdx_sports gym bag, this should be fun !!! 40kg worth of luggage. Remember there is always a way, you just have to find alternative ways to make it work“

And another post where Ford explained that he’d packed on a lot of weight despite having to train at home. He said that he’s bigger than he has been for ages which he was able to accomplish even while on a vegan diet. Ford does have some workout equipment though which definitely helps.

But he’s right in that you can use your environment to your advantage.

This was his message…

“So, I’ve managed to pack on a shit load of weight in 3 wks of home isolation training. It’s insane really when you think about it, but also not rocket science either. The body is an incredible thing, the only thing that has changed in 3 wks Is my training stimulus …… and that’s It !!!

Before I was doing a lot of fitness and very limited weights, role reversal as my environment now only really allows me to do this and boom I’m bigger than I’ve been for ages !!! Just goes to show if you apply correct methods results will happen. Currently weight 336lb, if this lock down continues I might be 400lb before were next allowed out 😂😂 and all this on a vegan diet 😉 with a few servings of 🥩😂 stay strong, stay focused and stay inside !!! Learn to use your environment“

Martyn Ford recently revealed that he was cast in the new, upcoming Fast and Furious movie which was scheduled for theatrical release on May 22, 2020. However, due to the current situation, it has been pushed back to April 2, 2021, which is basically a year from now.

This is a real bummer for everyone involved and fans but at the moment, safety is the number one priority. So, we’ll just have a bit to wait to watch ‘The Nightmare’ in his new role. But he’s definitely making the best of his time currently.