In a recent interview, five-time Fittest Man on Earth reveals his perspective on a long-running rift with Rich Froning, but then the beef gets squashed 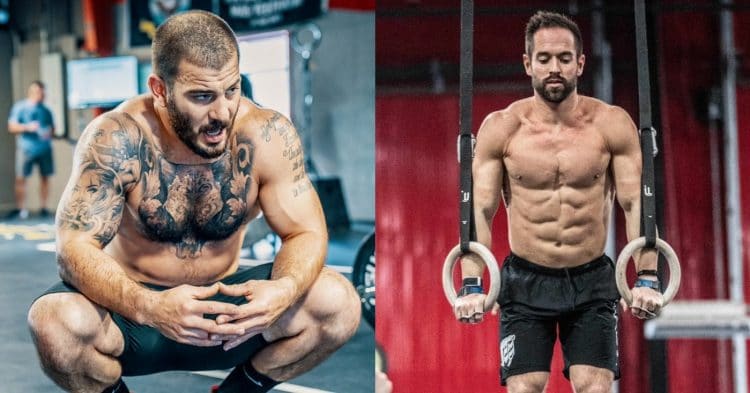 There has been tension between Mat Fraser and Rich Froning for quite some time. Recently the five-time winner of the CrossFit Games explained on The Darren Woodson show what caused their rift, and what is going on between the two currently.

It is a feud or rivalry that has been going on for about two-and-a-half years, said Mat on the show.

The History of Rich Froning and Mat Fraser

Any kind of competition or rivalry between CrossFit elites is expected, but this one has taken on a different turn that has now gone public.

Rich Froning is the first male to win the Fittest Man on Earth® four times, and did so in 2011, 2012, 2013, and 2014. Rich Froning has not only won the title multiple times, but he’s also considered a pioneer in the sport when it comes to building a successful business with a sport that is barely a decade old.

After Froning won in 2014, Mat Fraser would go on to become the next male for multiple consecutive wins of the same title.

Now there is a rivalry between the two that appears to go beyond competitive energy in the sport. On The Darren Woodson Show, Mat Fraser was asked about it. His most common response was that he wasn’t sure what the problem was today.

Something Weird Going On

It is unclear from Mat’s perspective what started the rift. If he knows, he’s not revealing it.

He was asked directly about it on the show. Fraser also said that the rift started after he moved to Cookeville in 2017. When asked about his relationship with Froning, Fraser said,

“Wow. Good question. Trying to get how to answer this tactfully. I’ve lived in Cookeville for three years, and Rich hasn’t spoken to me for two and a half. I asked around about what happened, or like, you know I was really concerned about it at first, um. But uh, I still have never gotten an answer.”

Fraser went on to say that he’s seen Froning do this to “three or four other people.” He says Froning just excommunicated them.

Mat Fraser went on to say that he tried to talk to Froning about it, but didn’t get a real answer. He also said that there was no confrontation, but that Froning just wouldn’t tell him what he was thinking.

“Um, and there was just some weird [__] that went on. And I was kind of like, you know, I tried to talk to him, try to give him an out of like, hey man, like we’re still cool, right? No confrontation, wouldn’t tell me what he was thinking, doing, never gave me a reasoning for like why I got kicked out of everything.”

Mat Fraser also touched on his relationship with his training partner four-time Fittest Woman on Earth Tia-Clair Toomey. She also moved to Cookeville to train. Fraser noted that Toomey’s relationship with Rich had remained intact.

He said he told Tia-Clair Toomey that he didn’t want her to be impacted by their rift. He noted that Tia and Rich were texting about Mat.

“It was when quarantine hit and all that and Mayhem was never getting shut down, we were still training there, all the members were still there. And then Tia texted Rich and was like, ‘Hey, Mat and I are still good to train there right?’ and he was like, ‘Nope.'”

Darren Woodson commented on the possible alpha energy in play between the two athletes, saying,

“You’re talking about two of the greatest to ever do it, right? I’m not saying there shouldn’t be mutual respect, but when you put two alphas in a room…who are the best of the best…they’re both gonna say ‘I was the greatest’. It’s innate.”

After this interview took place, Rich Froning decided to take a second to respond, but not in the way you may think. He shared a picture of he and Mat Fraser shaking hands, saying that the beef is squashed.

In a video response yesterday, Rich Froning admitted he did not even see or listen to the interview, but heard about it from others. He noted that there are always two sides to every story, and called the problem “unfortunate.”

Rich acknowledged that there was a “weird air” between them the last few years. He also said, when Fraser first moved to Cookeville, Froning had some knee stuff going on and didn’t want to be around anybody.

Froning also admitted to shutting Fraser out a bit.

“I guess in the beginning I kind of shut him out, and I don’t know if it snowballed from there, and it was almost like he was chasing ghosts. There was a lot of just, I guess a lack of communication in the beginning. It just sucks like I said, to have what sounds like my character and stuff like that lied about, which is unfortunate.”

Rich went on to note that at least one of the things Mat Fraser said about him was a “boldfaced lie.” He also noted that it was “crazy to me” that this word came out on a podcast.

“The fact that he says we haven’t talked in two and half years is a boldfaced lie as well because we have talked a couple of times.
You know we’re not best buddies but I would have said we were friends before that, you know like I said we were never going to be best friends, we don’t have a ton in common. But it is what it is and like I said it’s unfortunate, it’s just crazy to me that it’s on a podcast, and all this stuff.”

Froning continued by saying that this was a he-said she-said type of situation, and there wasn’t one real reason why the energy heated between the two of them this way.

“There’s a couple things in there, like I said, some of them are he said, she said, or his side of the story, my side of the story. Really there’s no story, it is what it is and it just sucks.”

It is not exactly clear what the true start of the beef was, or how it ended, but it is good to see Rich Froning and Mat Fraser put it to bed. At the end of the day, it likely is just a competitive rivalry and nothing more.

Australian CrossFit athlete Ricky Garard is set to make his comeback at Dubai CrossFit Championship 2021 in December after four...