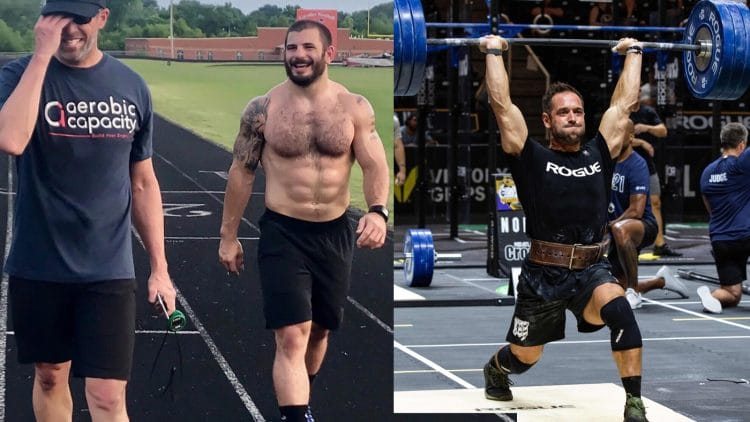 Chris Hinshaw is widely considered to be one of the best endurance coaches in the world. Chris is a former All-American swimmer and a 10x Ironman competitor, in his coaching career Chris has coached 30 CrossFit Games champions and 40 CrossFit games podium athletes. He has coached both Mat Fraser and Rich Froning and discussed it on Mark Bell’s Power Project podcast.

Mat Fraser is a 5x CrossFit Games winner, and was the first athlete to win it 5 times. He is considered as one of the most dominant athletes in the sport of CrossFit. Chris explained that Fraser asked him to help with his aerobic capacity and endurance, as he felt that strength is not the problem. One example of that is Mat wanting to do 25 repetitions of 150 lbs D-Ball over the shoulder with no rest, while he could only do 12 reps at that time.

Hinshaw also raised a point that Mat Fraser is arguably the smartest guy in the sport of CrossFit. He based that on the point of Fraser regularly looking around at other competitors.

“They think he is just looking. He is not doing that, he is watching the cadence of their chest move. If you are far from the finish line, and you are on two counts cadence, and you have more than two minutes to go. You are not a contender (to Fraser).” said Hinshaw.

Hinshaw addressed Mat Fraser’s swimming fail in the CrossFit Games 2017, and says that Mat almost drowned. He explained how they had prepared the perfect timing for run-swim-run event, but Fraser fell to second place. Him being behind a faster swimmer meant that he had to kick faster to stay close. Fraser’s legs used up all the oxygen and lactic acid buildup, which really messed up the plan.

“Here he was, he almost dies in an event and he finishes 5th… His legs lacked the aerobic capacity. Even though he ran a 5:05 mile, that doesn’t mean you can have a good kick.” said Hinshaw.

Rich Froning is one of the pioneers in the sport of CrossFit. He is a 4x CrossFit Games winner, one of the most dominant figures in the sport, and probably one of the first people who got fame from doing it. Chris explains that the sport was much different when Froning was doing it, and has some praise words for Rich.

“He was way ahead of his time… Rich Froning’s VO2 in the movement of running, rivals world record holders in the marathon. And he could put up 400 lbs above his head, and he weighs 195 lbs.” said Hinshaw.

Hinshaw explains that Froning never announced or told anyone about what and how he was training.

“It was always in silence, always in a barn, always by himself. Never told a single person.”

Froning was always training endurance and he was the most dominant athlete in the CrossFit games at that time. Froning’s endurance and a strict training plan allowed him to become a full time CrossFit athlete, and make a living from it. Rich is an extreme workaholic, Hinshaw mentioned that he even brought a full workout setup on a vacation in Florida.

“He is so inspiring, you watch it and it’s like: ‘How is he doing it?’

Hinshaw explained that when he started coaching Rich Froning, he was scared that he was going to ruin him.

“I knew I was going to make him a better runner, but I might ruin him as a CrossFit athlete.”

Rich Froning was running on a concept in which he doesn’t run more than 6500 meters per week.

Hinshaw wraps it up with a story about how he almost broke Rich Froning’s neck. He challenged Rich to do a handstand push-up jump onto a 45 lbs rubber plate.

“I never pitched that again. That didn’t work.”

Hinshaw managed to avoid the question of “The Greatest Of All Time” debate between Fraser and Froning, but he has given us a great insight into their work ethic, thinking, and lifestyle. Fraser and Froning are both great professional and inspiring athletes, and there is a lot to learn from them and one of the greatest endurance coaches, Chris Hinshaw.

Featured and other images courtesy of @hinshaw363 and @richfroning Instagram.