O'Hearn says tabloid YouTubers are more interested in creating excuses for themselves rather than doing the work to reach a next-level physique. 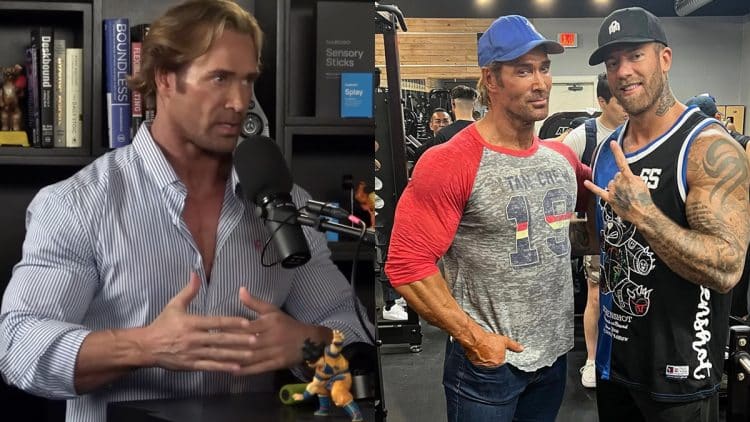 Mike O’Hearn is firing back in response to rampant steroid accusations, which were recently brought into the limelight by fitness influencer Kenny KO. In a podcast episode with powerlifter Mark Bell, O’Hearn gave some background history and discussed why ‘tabloid YouTubers’ are painting him in a negative light.

“There’s women out there walking around that are stronger than guys and they are not on anything, they’re females. You guys [tabloid YouTubers] look for excuses,” O’Hearn shared.

At 53 years old, O’Hearn has managed to retain his aesthetics, size, and strength. He competed as a bodybuilder decades ago, when he won the Mr. Universe in 1997. O’Hearn’s knack for fitness endeavors didn’t stop there. He’s also tested the waters in strongman competitions and has trained alongside some of the sport’s best, like four-time World’s Strongest Man Brian Shaw.

O’Hearn is a successful actor as well, having played the role of Thor and Titan from 1989 to 1996 in the American Gladiator TV series. And he will also have a notable role in his latest bodybuilding movie project, Magazine Dreams. He’s since revealed that shooting has wrapped up and fans should expect the motion picture’s arrival soon.

After sporting a ripped physique for over 30 years, influencers such as Kenny KO have started to question O’Hearn’s lifetime claim of being natural. The two butted heads recently, with Kenny asking O’Hearn outright if he uses steroids/testosterone replacement therapy. O’Hearn denied the allegations then but has more to say on the subject now, with podcast host Mark Bell.

During the podcast, O’Hearn shared a story about when he was 9 years old. He explained that he was able to challenge his fitness levels because of powerlifter Doug Furnas.

“Doug Furnas, Doyle Kennedy, and Jeff — was the guy I went down to, and he says, ‘kid, you’re too young to have a membership but this is what I’m going to do: if you put the weights away then you can work out here.’ And he kept testing me.

‘Okay, now that you’ve done that, let’s do the workouts and all the stuff like that.’ By 14, I was already doing walk throughs, where you take the person through the workouts. I said, ‘okay, now you have to do shoulder presses three sets of 8.’ And that was 14. But I was around these guys thinking these guys were the average. If you guys go Google any of those three, you’ll realize they were the greatest,” says O’Hearn.

Once he saw Doug Furnas and others lifting weight, Mike asked himself why he couldn’t do it better than them.

“Doug Furnas — especially for me, because he was the athlete. He was a fullback and his records still stand at his college. It made me realize when I got older, my ceiling was here… the strongest deadlifter, squatter, bencher — that’s what I thought, then I went above it and said, ‘I want to do what they did, but I want to be in great shape like a bodybuilder at the same time.'”

O’Hearn says too many people settle for mediocrity, including fitness tabloid YouTubers.

“My question is, why did I go: ‘I could do what they did, but better.’ Instead of me going, ‘well if they’re the greatest, I should be down here.’ Why do people instantly go, like you said, I’m telling these guys, you’re listening to tabloid guys that say, ‘everybody’s on it.’ No. You were on it. You held it for a second and you don’t look as good as her and you’re the same age.”

O’Hearn Follows Up on Kenny KO Argument: “You Guys Look for Excuses”

According to O’Hearn, tabloid YouTubers withhold information to their benefit and look for excuses because they’re afraid to do the work.

“I love Kenny. I love Kenny. Kenny is a nice guy. I said to him, ‘the point of me in trying to pull Mona in there, is that you guys give information, give ALL OF IT. Give all the information.”

Mike explained that he used his wife Mona to illustrate a point to Kenny KO. He says women can’t use steroids while they’re pregnant, so how could someone like Mona have a better body than Kenny.

“The point is, they can say whatever about me, I’ve been in the magazines forever. But you can’t say that about her [Mona in the Kenny KO YouTube video], who just went through a pregnancy, who looked the same before, during, and after. Wait, a woman can be on steroids and have a baby?

So, nobody is going to say that. Not any human, no tabloid guy is going go ‘no, you can be.’ You can’t be. Especially at her age too, that was another thing,” said O’Hearn.

Before ending the discussion, O’Hearn stressed that he doesn’t care if others use steroids but said kids/teenagers should steer clear of such compounds.

In addition to the natty or not talk, Kenny KO asked O’Hearn about his testosterone, and whether men’s test levels decline as they get older. O’Hearn said they don’t despite Kenny claiming it to be “medical science.”

In a recent interview with hormone therapy guru Dr. Rand, he took issue with O’Hearn’s claim that testosterone levels don’t dip later in life. He believes O’Hearn is an exception to the rule (currently) and believes most men will experience a decline in testosterone levels as they age.

While Mike O’Hearn has managed to keep a shredded physique for most of his life, he insists that he’s never used performance-enhancing drugs. He encourages others, especially tabloid YouTubers, to focus on how to improve instead of trying to “phone in” excuses.