O'Hearn values old-school workouts that inspire longevity while training with Arnold Schwarzenegger's son, Joseph Baena: "You're in your 20s, I want you lifting at 75" 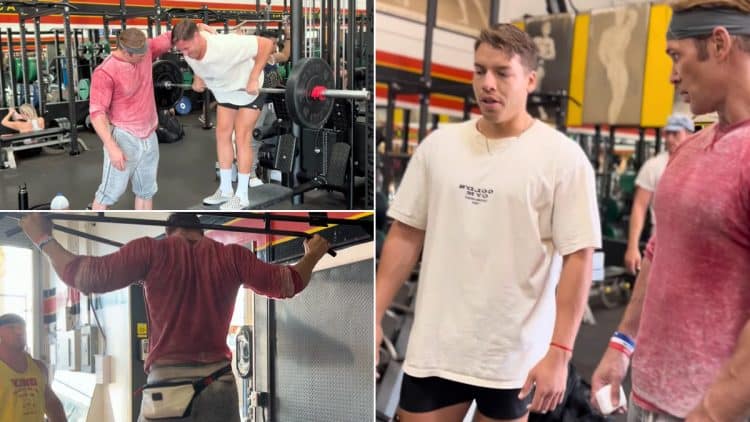 Bodybuilding veteran Mike O’Hearn is the picture of longevity at 53 years old with a shredded physique and impressive work ethic. In a recent video featured on YouTube, O’Hearn and Baena join hands for a demanding old-school back workout designed to build longevity.

O’Hearn established his name in the fitness community with well over thirty years of experience lifting weights and working out. He has been featured in several magazines, acted in movies, and led a successful career as a bodybuilder. During his time competing in the sport, O’Hearn won the Mr. Universe title four times. O’Hearn is celebrated for his longevity at 53 years old and doesn’t appear to be slowing down.

This isn’t the first time Mike has teamed up with Arnold Schwarzenegger‘s son, Joseph Baena. Earlier this month, they trained arms together while offering fans and followers valuable insight. O’Hearn emphasized that this workout helped increase aerobic intensity due to the training sessions having fewer rest periods. In addition, Joseph and Mike also shared a workout consisting of their favorite arm supersets.

Baena has yet to take on the sport of bodybuilding but that hasn’t stopped him from staying in excellent shape. Similar to his father, Joseph decided to make his presence known in Hollywood. He’s assumed roles in action-based movies like Lava and Call of Duty: The Last Airshow. For today’s workout, instead of focusing on muscle mass, O’Hearn and Baena are training with the goal of furthering longevity.

During the video, Mike O’Hearn and Joseph Baena went through a demanding back workout.

“A little bit more, just that squeeze at the top. Instead of it being flat, I’d like to pop it all the way back. Almost like you’re posting from the back, Mike O’Hearn said. “One of the things we’re talking about is stretching out the side of the bench.”

“We like putting over our toes and then putting it on the bench, but both ways… more range of motion is better. This is like incredible for a great stretch,” O’Hearn explained. “It forces you to lift moderate weight and understand the whole range of the movement. Everybody comes in and says, ‘I just want to do it over there.’ If you do this first [lift while standing on the bench], then go over there, that heightens.”

According to O’Hearn, the guy ‘with the energy’ always leads the workout. They trained bent over barbell rows on the floor after utilizing the bench variation. Baena performed one set. Afterward, O’Hearn said to treat light weight as if it were heavy weight to garner better results while lifting.

“The guy with the energy leads the workout, usually. We’re both freaking hyped, so it’s going to be a tie here. Normally, Joseph leads the workout, but again, the only reason I’m saying that is — someone has to bring energy to the workout. If someone is tired and dieted out, you bring the workout,” Mike O’Hearn explained.

“Always treat the light weight as heavy and the heavy weight will be light. If you going into reverse it’s just going to continue to pack up,” O’Hearn said. “I don’t want to have wrist or elbow nerve issues. I want to be able to manhandle this.”

O’Hearn favors exercises that are conducive to longevity. He acknowledged that younger audiences may want muscles but building healthy arms and shoulders is more important in the long run.

“You’re talking bodybuilding. If they want to come in and do bodybuilding, that’s great. You’re in your 20s, I want you lifting at 75. At some point, you’re going to go, ‘the muscle is cool and everything, but I want healthy arms and shoulders,'” O’Hearn added. “If you don’t play with it now…”

Mike believes stiffening the back during bent over row variations will make the exercise safer to implement.

“You create stiffness prior to the exercise, prior to lifting it,” O’Hearn said. “He created stiffness in the back and then he pulled here. It’s creating the stiffness that keeps you safe. It’s not the actual position. It’s the stiffness within the position.”

“It’s really the stretch that’s the game changer. I feel like it’s the whole back stretching not just the upper lats.” Joseph said.

In O’Hearn’s opinion, exercises like these are ideal when trying to build longevity inside the gym.

Baena agreed with O’Hearn about range of motion affecting the results of a workout.

“The whole posterior chain is being activated,” Baena said.

In the end, Baena was left impressed by the workout as he mentioned he’s never tried these types of maneuvers. O’Hearn’s ability to draw on old-school techniques has no doubt assisted him in the gym throughout a successful career spanning decades.