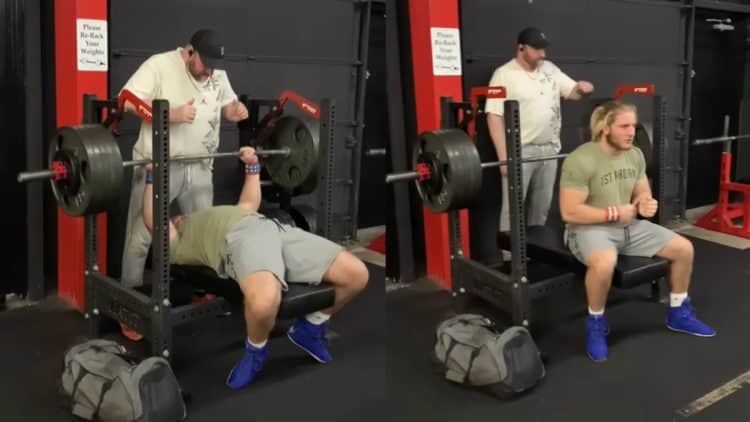 Although his main interest is American Football, Morgan Nicholls has built a name for himself in the strength community as well. Morgan, at the age of only 16 years old, appears to be one of the greatest powerlifting talent ever. He frequently shares his gym lifts, some of which would likely break World Records if they were performed in a sanctioned competition. Among them is Morgan’s recent bench press PR of 515 pounds (233.6 kilograms), which he posted on Instagram.

Seeing that Morgan Nicholls only used wrist wraps to preserve his joints, his new bench press PR is raw by powerlifting standards. Morgan also made it clear that this was his last heavy bench press attempt for a while, since he plans on going back to doing sets of multiple reps with lighter weights.

Morgan Nicholls also mentioned that he is recovering from some kind of leg injury in the caption of his Instagram post. It’s not clear what the injury exactly is, but Morgan is almost ready to train deadlifts and squats at full potential.

“New bench PR 515×1 this will be the last heavy day for a while back to heavy working sets next goal is to push the Dead lift and hopefully by that point leg will be fully recovered and can really push legs.”

Apart from playing in running back and middle line back positions, Morgan Nicholls also dabbled in powerlifting a few years ago. His only appearance was at the 2020 SPF GP Summer Smash, where he managed to win the Teen 13-15 age class. His performance looked like this:

However, Morgan Nicholls has scored some much heavier PRs in the training room, one of which is his recent 515-pound (233.6-kilogram) bench press.

Morgan Nicholls is the son of two bodybuilding icons, Chad Nicholls and Kim Chizevsky-Nicholls. His father, Chad, is a renowned coach who has worked with a number of famous figures including Ronnie Coleman, Big Ramy, William Bonac, and a few other well-known athletes. His mother, on the other hand, is a four-time Ms. Olympia and an IFBB Hall Of Famer. So, with everything combined, it is not unusual that Morgan is one of the strongest teenagers in history.