Not even a serious nosebleed could stop Morgan Nicholls from hitting a new PR. 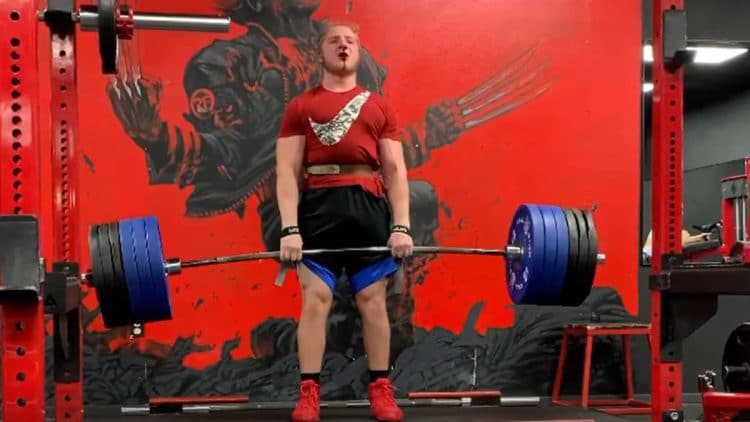 Most of us dream of hitting a 6 plate deadlift at some point in our life, but there are people who possess the strength for that in their early teen years. A 15-year-old prodigy, Morgan Nicholls, is one of them. He has been recognized as a monstrous athlete for a few years now, and he is only getting stronger. On February 21st, Morgan posted a video to his Instagram account, which displayed a huge 585 lbs (265 kg) deadlift PR.

What is impressive is that Morgan suffered some severe bleeding from his nose during the lift, but that did not stop him from hitting a new PR. Morgan only used a lifting belt and straps to aid him in the lift. He pulled the weight to his knee level pretty quickly, but struggled a bit in the lockout phase of the lift. Morgan also set his sights on a 600 lbs deadlift before July.

All of Morgan’s accomplishments require a lot of hard work, but his genetics are also elite, which plays a big factor. Both of his parents were very successful in what they did. His father, Chad Nicholls, is a well-known bodybuilding coach and nutritionist. He had previously worked with 8x Mr. Olympia Ronnie Coleman, the current Mr. Olympia Mamdouh “Big Ramy” Elssbiay, and boxing icon Mike Tyson.

Kim Chizevsky-Nicholls, Morgan’s mother, is also a bodybuilding icon who has won four Ms. Olympia titles (from the year 1996, 1997, 1998, 1999). She is widely considered as one of the most powerful and muscular female bodybuilders of all time. Kim is also a member of the IFBB Hall of Fame.

The 15-year-old Morgan Nicholls is currently playing football, but enjoys powerlifting, having competed once at 13-years-old. Morgan won the Teen 13-15 division in the 2020 SPF GP Summer Smash. This is his only sanctioned competition currently, and thus all of his official PRs are from it.

His latest deadlift of 585 lbs (265 kg) is the heaviest he has pulled in training.

It remains to be seen what path Morgan takes in the future, but powerlifting definitely seems the right decision. However, there are a few other sports in which he can excel in. With his parents’ experience, his hard work and desire, he will certainly make for a top level athlete.