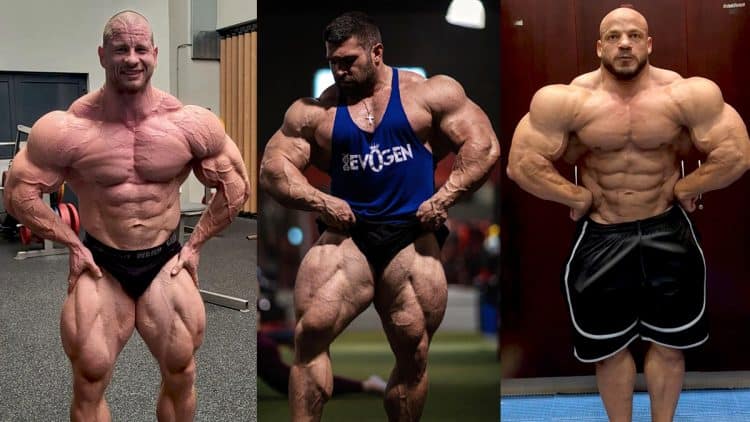 Preparations for the upcoming 2022 Olympia are in full swing. From powerhouse Mamdouh ‘Big Ramy’ Elssbiay to rising prospect Andrew Jacked, this season is turning out to be one of the most exciting and competitive in recent history. Speaking on The Muscle Maturity Podcast, former Olympia winner Samir Bannout shared his breakdown of top contenders in the Men’s Open division along with Nick Trigili and John Hansen.

The 1983 Mr. Olympia winner Samir Bannout moved on from competing a long time ago but his passion for bodybuilding is apparent anytime he discusses the sport. Earlier this month, Bannout backed surging contender Michal Krizo to make a statement in his maiden Olympia appearance. Bannout believes Krizo has the right tools to get a spot on the podium and encouraged him to ‘torture himself’ with posing, much like bodybuilding icon Frank Zane, to fulfill his potential.

Besides Bannout, four-time Mr. Olympia winner Jay Cutler is also sold on the Slovakian mass monster Michal Krizo. Cutler is confident Krizo will be a threat at the Olympia and went as far as to say that Krizo could be in the first callout at the prestigious competition.

The Men’s Open division is brimming with talent. Nick Walker is another contender who could surprise everyone in his second Olympia showing. After placing fifth at the 2021 Olympia, Walker got to work in the off-season and appears to have made significant progress. Bannout admitted that he was not always a fan of Nick but turned into a believer after seeing the improvements he made over this last year.

In a recent YouTube video, Samir Bannout sat down with Nick Trigili and John Hansen to give his take on the top contenders for the upcoming 2022 Olympia, scheduled for Dec. 15-18 at Planet Hollywood Resort & Casino in Las Vegas, Nevada.

Bannout started by asking Trigili for his prediction of the top five before discussing other stars in the mix of title contention.

Bannout expressed confidence in Krizo and 212 standout Derek Lunsford, who received a special invite for the Open division this year. As it stands, Samir is backing them to shake things up this year. Meanwhile, Trigili shared his picks but ruled out former Olympia champion Brandon Curry as a serious contender for the title.

Trigili: “Those are my five. I don’t know what’s going to happen after that. I really want Andrew Jacked there too but I just don’t think he’s going to be ready, good enough yet.”

“If Andrew Jacked is in shape, he’s going to be a real problem. I think he’ll be sixth, right on the cusp. He’ll be like top eight most likely. I don’t know if he’ll be in the top five. Him and Krizo could easily flip-flop spots.”

“No way Brandon is in the top five. They might give him a gift and put him in the sixth place which is usually what happens when guys fall off. They’ll give them like a gif.. I just can’t see Brandon standing next to any of those guys. There’s just no f**king way unless he does some magic sh*t, which he can, I don’t know.”

Bannout: “I think this year is going to be a tougher Olympia for sure because Derek and Krizo are really going to upset a lot of people.”

About two weeks ago, Samir Bannout shared his prediction for the nearing 2022 Olympia’s top five. He sees ‘Big Ramy’ extending his reign of dominance and also placed Andrew Jacked and Michal Krizo in the top five behind runner-up Hadi Choopan and third-place finisher Curry. Bannout also called for Hunter Labrada to get shredded to the bone and advised Samson Dauda to fix the ‘bubble gut’ look before taking to the stage.

Two-time Mr. Olympia ’Big Ramy’ looks ready to defend his throne and to further his illustrious career. He recently sent warning shots to his competition with a brutal training session, where he showed off his strength just two weeks out from the biggest show of the year.