'The Real Deal' expects Samson Dauda to make a statement at 2022 Olympia: 'he's a dynamic competitor because of his ability to connect his body with poses.' 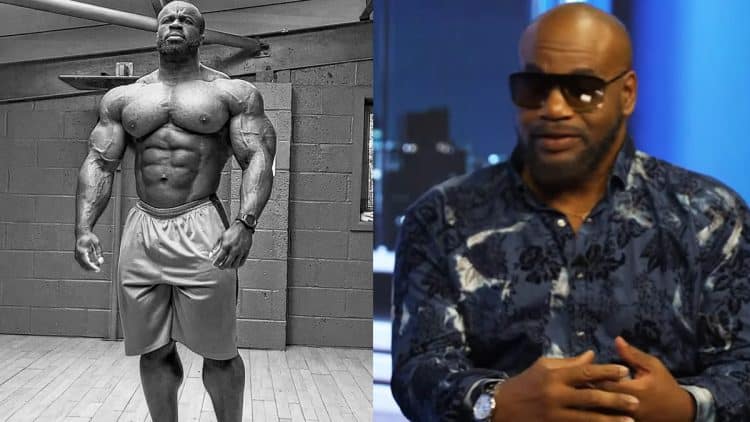 Preparations are wrapping up for Samson Dauda, who will battle on stage in two weeks against some of the sport’s best Men’s Open competitors. In a recent episode of Prime Time Muscle, bodybuilding veteran Chris Cormier examined Dauda’s physique and offered some advice before he competes at 2022 Olympia.

Then Samson placed third at the Yamamoto Cup and followed that up by winning the 2021 EVLS Prague Pro. He became one of the first pros last year to earn his ticket to 2022 Olympia as a result of this victory. Despite having his qualification for Olympia in his back pocket, Samson chose to compete at the Arnold Classic and the Boston Pro in March, where he finished fourth at both contests.

Throughout the off-season, mass monster Dauda consistently made headlines, and at one point, was pushing the scales at around 330 pounds. En route to preparing for his Olympia debut, he has trained with top-tier talent like Nick Walker and former 212 Olympia winner Kamal Elgargni.

Several coaches included him in their top six 2022 Olympia prediction lists. Even the reigning two-time champion Mamdouh ‘Big Ramy’ Elssbiay’s trainer, Chad Nicholls, believes Dauda will crack the top six in two weeks. The latest to share his take on Dauda is Chris Cormier. He broke down Dauda’s physique and chances at the upcoming show.

During the podcast, Cormier reflected on Dauda’s career thus far in the IFBB.

“Well, Milos [Sarcev] — he likes to take it to the limit so to speak when it comes to the training, the diet, whatever you’re doing to prepare for the show. I think he was really high up on this guy [Samson Dauda]. Milos thinks he’s in the top five, that’s what he’s talking when I speak to Milos. He may be right. He may be.

Everybody saw the big game, like Terrick said, that’s exactly the recipe that Ronnie had everyone eating off of. That same meal. He came in and totally transformed his body. The judges have a lot of respect for him I know because I’ve spoken to them about and spoke to Samson at the Arnold Classic and I just commended him on his attention to detail with his posing,” Chris Cormier said.

According to ‘The Real Deal,’ Samson’s main concern this season should have been adding more mass to his back.

“Like I said, when I critiqued him at the show [2022 Arnold Classic]. The only thing I noticed was his back. You can call them baby back ribs if you will. He just needed more mass in the back. That’s the only thing that’s lacking in this pose right here, but you do see the separation,” said Cormier. “If he had a little bit more width and thickness then you’re talking about someone who would have probably moved up and challenged for the top spot at the Arnold Classic.”

Given the size and weight of Dauda, Cormier advised him to bring a balanced package, especially in regard to the midsection.

“You don’t want to just have a powerful physique. You want everything balanced. You want that midsection to set off your physique when you compete. The hamstrings are great as you see and the quality on the side of the quad — all that stuff, you can hang with anybody with that.”

Cormier recognized Dauda’s exceptional posing skills and said the bodybuilder has a unique ability to keep his mind and body connected during these routines.

“Like I say, he’s a dynamic competitor because of his ability to connect with his body and to move into different styles of posing. He went through all of the legendary posers in his routine at the Arnold Classic. I was just so impressed with that.”

Again, Cormier and IFBB judge Terrick El Guindy underlined the importance of Samson controlling his midsection while on stage.

This isn’t the first time that Cormier has offered tips to top Men’s Open competitors. A few months ago, he assessed Andrew Jacked’s (real name Chinedu Andrew Obiekea) chances ahead of his Olympia debut. While Chris said he’d like to see ‘clearer lines’ on Andrew’s physique, he still believes the rookie will earn a top-10 placing at this year’s Olympia.

Cormier also labeled the 2022 Tampa Pro winner Akim Williams as a legitimate threat. He believes Akim has a blend of aesthetics and mass that could give some household names in the Open a run for their money.

Considering the depth of talent expected to compete, picking a winner has arguably never been more difficult. Despite the stacked lineup, Cormier predicts Dauda could shake up the show as long as he keeps his midsection in complete control.