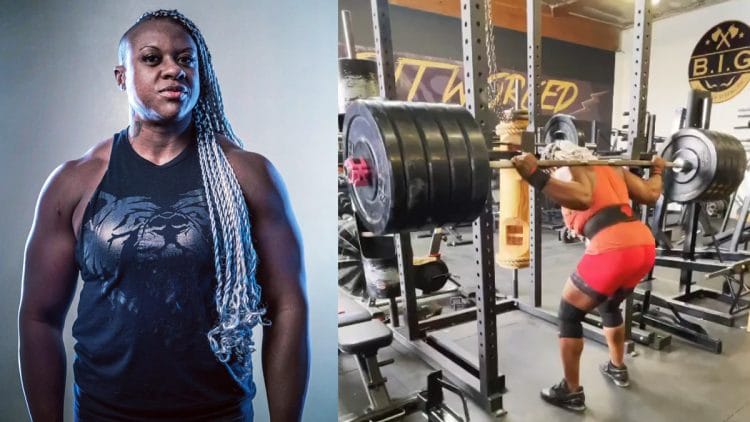 Nadia Stowers is known as one of the most elite Strongwoman competitors in the world. Nadia is frequently considered a static powerhouse, as she excels in the log press and deadlift events. She recently started preparing for her first powerlifting competition, and just posted a very impressive squat update. On March 15th, Nadia Stowers shared a video on her Instagram in which she can be seen hitting a new 465 lbs (211 kg) squat PR.

Nadia states that this squat is 35 lbs (16 kg) heavier than her previous PR, which marks tremendous progress in her preparation. She only used a lifting belt, knee sleeves, and wrist wraps to aid her in the lift. Nadia also explained that she recently transitioned to a low-bar squat technique. She is obviously very satisfied with how it feels and described it as “the best decision” for her squat.

“I’m bringing some B.I.G numbers to Iron Wars! Still getting used to it, but I’ll take this 35lb PR!”

There are no official statements on C.T. Fletcher’s Iron Wars VI, but it is said to happen on May 20th, 2022. C.T. Fletcher is constantly announcing new competitors on his Instagram.

Nadia Stowers has built a very impressive resume for herself. She is a professional Strongwoman competitor and mostly competes in the 82 kg weight class. Nadia’s greatest achievement is winning the 2021 U82 World’s Strongest Woman. She managed to do so with an incredible performance, having won 3 out of 6 events with ease.

Nadia’s first professional competition was the 2019 U82 World’s Strongest Woman. Despite coming in sixth place, it was already very clear that she possessed extreme strength and that a bright future awaits her. Nadia only had one competition in the open weight class, and it didn’t go too well for her. It was the 2021 World’s Ultimate Strongwoman, and Nadia finished in last place.

You can watch two of Nadia’s records here:

Her recent 465 lbs (211 kg) squat PR is a huge achievement. With 2 months left until Iron Wars VI, Nadia has enough time to find some slight adjustments, which can improve her lifts massively.