Natalie Richards turns in an earth-breaking squat PR of 385.8lbs. 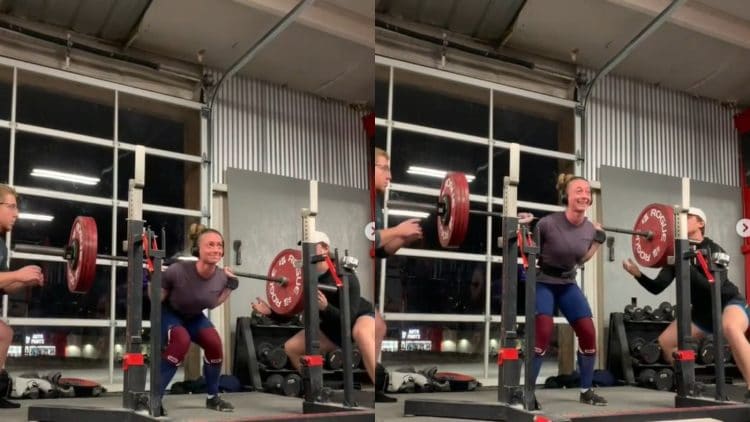 Natalie Richards is a blue-chip athlete and certainly one to watch this year. On Jan. 10, 2022, the rising powerlifter took to Instagram and shared a video of her setting a new squat PR of 385.8lbs but it wasn’t without effort.

Natalie Richards represents a new breed of rising powerlifters. As an avid competitor, there are few athletes in her proximity that retain detail like Richards can. The powerlifter has made her name known at plenty of sanctioned competitions. Natalie Richards took part in the 2021 USAPL Virginia Pro at a disclosed bodyweight of 128lbs (58kg).

During Natalie Richards‘ impressive squat PR, the powerlifter is seen wearing knee sleeves, a lifting belt, and wrist wraps for the lift. The feat was all the more spectacular considering that Natalie Richards admits that she hit the PR while in the middle of a high volume squat routine.

READ: Video: Gym TikToker Thanks Man Because ‘My Booty Was Not His Focus’

Prior to setting her PR on Monday, the powerlifting prospect also hit two triples on the barbell stacked with 319.7lbs. Following Natalie Richards’ astounding PR, the powerlifter opted to hit two more sets of 286.6lbs for 5 reps each.

Natalie Richards tipped the scales at competition weight, meaning: Richards’ recent squat PR is three times her bodyweight. Richards remains a potent threat to any powerlifting competition in her sights. The powerlifter has already accumulated quite a few 1st place trophies too.

Open Powerlifting is a site offering a database for powerlifters and a ranking system. Below, you can find all of the events that Natalie Richards received a gold medal at during her time in the sport.

With such a gargantuan lift in her back pocket, the young yet disciplined athlete is showing that even outside of competition — she’s a force to be reckoned with. Following her strenuous squat PR of 385.8lbs, powerlifter Natalie Richards isn’t just setting PRs but the rising star is putting the rest of her peers on notice.

There was one athlete, Ashton Rouska, who managed to defeat Richards and set a pair of records as well. However, if Richards maintains squat PRs like these (385.8lbs), the American will no doubt be a nightmare match-up when it’s finally time for a sanctioned competition.